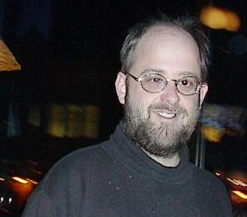 John Newmark has not received any gifts yet

What surnames are you interested in researching?
Newmark, Cruvant, Kruvant, Blatt, Deutsch, Vanevery, Van Every, Denyer

What countries and other locations are you interested in researching?
USA, Canada, Poland, Transylvania

Do you have a genealogy website or blog?
http://transylvaniandutch.blogspot.com

I was born in 1969 in St. Louis, Missouri and have lived here all of my life except for a few years during college. I am a grant writer for a 501c3 by trade, and have been hooked on genealogy research for only the past two years, though I have long been interested in my own family history.

In addition to the genealogy blog linked to above (and which you can read a few recent posts from below) I maintain a personal blog and a site dedicated to the 19th century French author, Victor Hugo.

I write poetry and perform locally at open mics

It's been a long while since I've been able to add a photograph to my ancestral montages below. It's exciting to be able to do so.

I posted the below photo in 2009 as an Unidentified Family phOto. Going through some family folders, the image was used on a family reunion packet back in 1992, and the photo was identified as Israel and Sarah Lichtman, 1915, Austria-Hungary.
Israel was my 2nd great grandfather, and Sarah Jonas Lichtman was his second wife. (My 2nd great grandmother was his first wife, Betty Adler.) I have no other photographs of Israel to compare, so I will just accept the identification from the family reunion packet. Especially since there was a date given, with no indication that it was an estimate, the information probably came from the back of the original.
My Great grandparents (Samuel and Helen Lichtman Deutsch) immigrated to the US in 1912 and 1913, so this photograph was apparently taken after they had left. 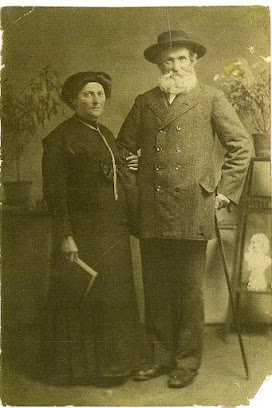 Belle Wyman Korn (1914-2015) was my grandmother's first cousin. They were the same age, and were best of friends. The Wymans moved to California in the 1930s, and this is Belle at her pool in 1972. That is Cary Grant standing next to her. I am not sure, yet, about the story behind the picture. For comparison, I've included a photograph I found online of Grant and Ingrid Bergman from 1972. It's definitely him. 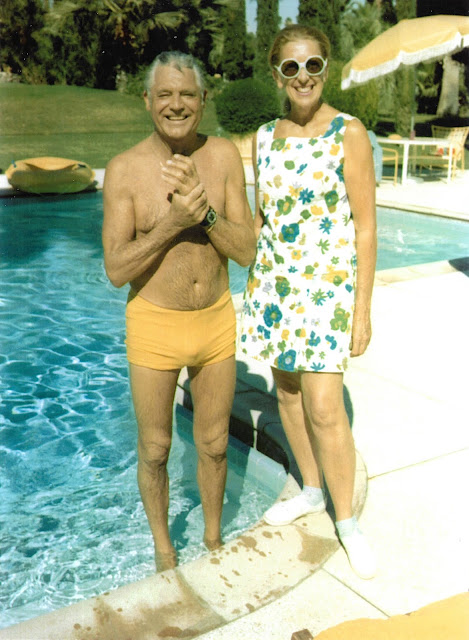 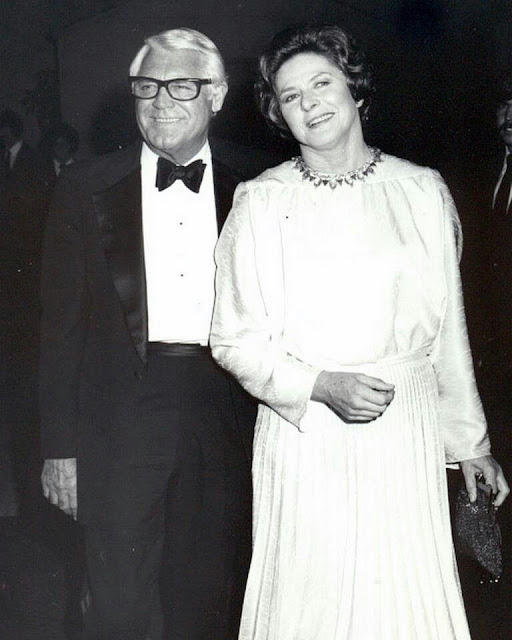 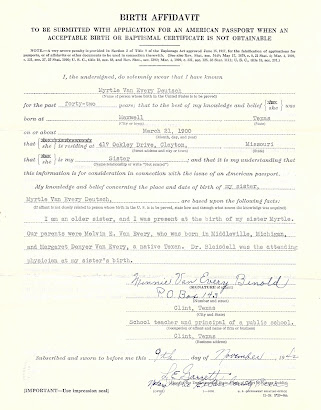 My maternal grandmother, Myrtle Vanevery Deutsch, had her sister sign an affidavit of birth for her twice. In 1942, and again in 1945.
In 1942 my grandmother was living in Clayton, Missouri (part of St. Louis County). In 1945 she was in West Palm Beach, Florida. In 1945 my grandfather was returning to the states after serving in Africa and the Middle East during WWII. My grandmother took the kids to Florida to join him for the remainder of the war.
In 1942 my great aunt declared my grandmother was born on March 21, 1900. In 1945 she declared my grandmother was born on March 21, 1905. In both she states she was present at the birth. She provides several more details in 1942, such as the attending physician. In 1945 she simply states she was present. (I suspect she wasn't all too happy about filling out the affidavit in 1945, but was willing to do it for her sister. I suspect my grandmother was looking for a job and wanted to be five years younger.) 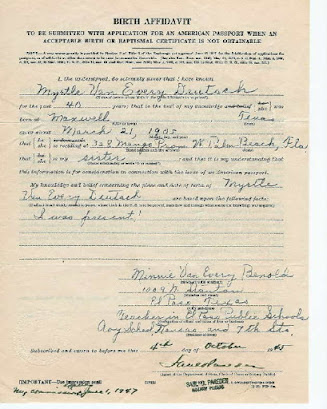 There is no question as to which is the correct affidavit. My grandmother is on the 1900 census, and is mentioned in the testimony given to the Dawes Commission in 1901 on the family's alleged Choctaw ancestry.
I have had a copy of the 1945 affidavit in my records for several years, having uncovered it in some folders at my parent's house over a decade ago. My parents gave me 20 boxes of family photos and documents this week, and in one I found the 1942 affidavit.
Update: I’ve been given another explanation for the second affidavit. My grandmother didn’t want anyone at the army base to know she was 7 years older than my grandfather.

Tu b'Av is a relatively obscure Jewish holiday that falls on the fifteenth day of the month of Av (sundown Tuesday Aug 4 to sundown Wednesday Aug 5 this year).

The fifteenth day of each month on the Hebrew calendar falls on a full moon, and the holiday was observed as a sort of fertility festival during the period of the Second Temple. After the destruction of the Second Temple, it was forgotten for the most part in the Diaspora, only to be revived in modern times as a Jewish alternative to St. Valentine's Day.

To some, St. Valentine's Day, or Tu B'Av, may feel manufactured for greeting card companies, florists, and chocolatiers. However, most couples have their own personal "Days of Love." Whether the annual date commemorates a first date, an engagement, a marriage, or another anniversary, it's significant only to the individual couple. The memories connected with these dates are often stronger than the ones associated with the annual religious or societal holidays. Still, any reason for two people to celebrate their love for one another is a good reason. 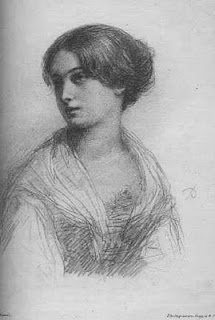 To A Lady
by Victor Hugo,
From Les Feuilles D'Automne

Child, were I king, I'd yield my royal rule,
My chariot, sceptre, vassal-service due,
My crown, my porphyry-basined waters cool,
My fleets, whereto the sea is but a pool,
For a glance from you!

Love, were I God, the earth and its heaving airs,
Angels, the demons abject under me,
Vast chaos with its teeming womby lairs,
Time, space, all would I give--aye, upper spheres,
For a kiss from thee!

translation by Thomas Hardy
photogravure by Goupil et Cie, from a drawing by Deveria, appears in a collection of Hugo's poetry published by Estes and Lauriat in the late 1800s.

Leslie Vander Meulen Canavan said…
OHHH, I just found Katie's comment, way at the bottom, perhaps I haven't been looking down far enough? I will try this for the next few to see if it working the same all the time....sorry to bother about nothing! !!

Leslie Vander Meulen Canavan said…
John, I keep getting emails that have links to supposedly recently posted content, but when I click the link I come to the site, NOT the recent post. In other cases, the link goes directly to the new link. Here is what I just received:
Katie Heitert Wilkinson left a comment in Missouri Genealogy on Genealogy Wise

To view this activity, go to:
http://www.genealogywise.com/group/missourigenealogy

--
To stop following this group, go to:
http://www.genealogywise.com/group/missourigenealogy?unfollow=1

To control which emails you receive on Genealogy Wise, go to:
http://www.genealogywise.com/profiles/profile/emailSettings
but that top link does NOT take me to her post, which I can't find by going to the beginning or end of the posts. What gives?

Dixie Jack Halber said…
World's colliding! Saw your name in the Confederate group and was like "wait.... I know him!"

Johnny said…
John, your comment about ownership on the suggestions discussion was really great. Would you mind re-posting that as a new discussion in the Member Help group?

The differences between the GenealogyWise emails

Disclaimer I am not associated in any way with GenealogyWise or FamilyLink.

I have noticed in the groups that I created and participate in some confusion as to the emails that people are receiving automatically announcing comments, discussions, and replies. In the absence of a "help" or "FAQ" document for me to point them towards, I thought I would write up a post on my understanding of them. I spent several years in an IT environment and what seems a lifetime on computers,… Continue

For Group Admins: Disable "Send Message to All"

If you created a Group - you are the Admin of that group
.
Under Admin Options you should see "Edit Group"

Click on that, and on that panel you should see "Allow members to send messages to the entire group"

I highly recommend that you uncheck that box if it is currently checked.

What happens with that option is if someone clicks on the link "Send Message to Group" the message arrives in the *email* of *everyone* who is a member of the group.… Continue

Amanuensis: a person who writes what another dictates or copies what has been written by another

Perhaps you are lucky enough to have an ancestor’s journal, or a bundle of letters they wrote. Perhaps a grandparent recorded their memories on a cassette tape before they passed away.

Have you considered scanning/digitizing these documents into your computer, and transcribing the contents?

1) Handwriting fades over time. As long as one… Continue