My 2GGF was Franciszek Drachowski. I have been able to find very little about him. While perusing records on The Poznan Project, I came across one for "Franciscus Drochowski alias Szczepanka" (and two entries below this one is "my" Franciszek Drachowski). I have some DNA matches on MyHeritage that are Shchepansky's. How close is Szczepanka to Shchepansky? Could this be a lead? And why would this person have had an alias? Any thoughts here are appreciated!…

Ever since genetics “joined” history and archaeology, some 20 years ago, there has been a huge breakthrough in the study of the origin and development of various human populations. Genetic genealogy, haplogroups, STR markers, SNPs… have made the story much clearer, confirmed many historical assumptions, and even proved some deeply rooted opinions to be wrong. “Genetics” has recently become rather popular among many ordinary people who wanted to know what it was all about.  However,…

Everyone has a Story to Tell ... What's Yours?

It's a new year, and what better way to start it off than with a new episode of The Heritage Hunters?

searching for info about my ggg grandfather James Morrow. Who were his parents and who brought the family to USA from Ireland James Morrow BIRTH 1 Oct 1782North Carolina, USA DEATH 23 Jul 1858 (a…

searching for info about my ggg grandfather James Morrow. Who were his parents and who brought the family to USA from Ireland

Wishing all of our students and GenealogyWise members – a very Happy New Year and Success in all of your genealogy endeavours this coming year! … December is a special time of the year. A time to make memories, but also to reflect on memories of past generations. As we close out this year, take time to reflect on what can be added to your own family history, and what you… Check out the Index of Transcription Tuesday Series blog posts for The National Institute for Genealogical Studies. @GeneaStudies Blog http://blog.genealogicalstudies.com/2021/09/transcription-tuesday-index/
Join the…

Everyone has a Story to Tell ... What's Yours? Do you have a genealogy story to tell? Email us at 2heritage.hunters@gmail.com to join the show! Subscribe to our Podcast on Spotify! 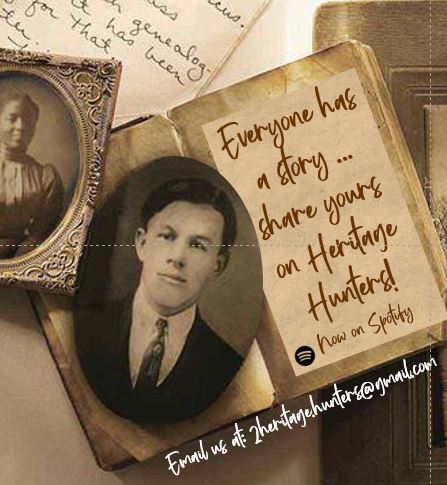 Continuing Research In The James River Area of Virginia 1730s

Research never ends, and this is true with the ongoing process of discovering the Great Wagon Road. The project leads to early settlements in the James River area in Virginia. I have discovered over fifty surnames in this immediate area. I've shared them in a recent article including sources for those who are interested.…

Still On the Hunt

Still on the hunt for this granddaughter of Hannah Jane Champion, wife of 2nd great grand uncle John P Peterson

Emma seems to have married twice. I'm not really sure how this works because a social security record comes up for Dorothy Thompson as her parents who died in 2001 They all lived on Marshall Street in Atlantic City New Jersey that's mentioned in the 1920 newspaper article for Mary A Peterson. If Abel Thomas died in 1902, and Emma's son Herbert was born 15 April 1900, and…

Further research has revealed that my Kennedy lineage traces back to Duncan Kennedy, who married Ann Fraser, in Argylleshire. Their son, Duncan, was born in 1772, and in 1808 he married Mary Butter(s), at Keppoch. Duncan and Mary had at least one child, John, born sometime between 1816-1818. John migrated to Australia, before 1848, when he married a widow, Margaret Drane, ( nee Mc Phee),( born in Scotland, in 1822), in Melbourne, Victoria, Australia. Margaret already had two kids, and she…

Launched my first book - Jolly Boats on the River

Genealogy started as a hobby for me in the early 1980s when began tracing my family's origin.  Becoming more intrigued by my findings, I began my pursuit of a professional designation in genealogy with the National Institute of Genealogy at the University of Toronto.  Today, my research connects genealogical evidence to the family stories, preserving them for the generations that follow.

Recently graduating as a professional genealogist, with a passion for preserving…

Richard Nallen was. Born in 1632 in Market Deeping, Lincolnshire, England and is my 11th Grandfather on my maternal side. Seeking any info please.
https://photos.app.goo.gl/58pZ3fqkWufE8yvK8 Nestled along the side roads of 19th century America, little schoolhouses dotted the landscape. Their building shapes were as unique as the people entering through their doors. From simple designs to an elaborate architectural theme, these structures defined character and future dreams. The size depended on the need, which…

Nestled between the mountain ridges of eastern Tennessee lies a region rich in history. An area visited by explorers, Native Americans, and early pioneer families, a land that speaks of traditions and folklore, stories, and legends. Sullivan County, North Carolina, was the second county located in present-day Tennessee to exist. After establishing Washington County in 1777, Sullivan County began the journey with North Carolina in 1779. The county’s name originated in honor of …

Every once in a while I come back to more recent ancestors. The past few days it's been my great grandaunt; Fannie Slezak.