I have included history, pictures and documents that would be of value to Barnetts as well as allied families from PA, VA, NC, SC and especially Kentucky and Illinois.

With the popularity of the television show Who Do You Think You Are, more people are showing an interest in finding their roots. I am a genealogist, living in Ontario, with an expert in Scottish genealogy research. I offer 10 day trips to Scotland to allow people to access the records directly (as opposed to paying for services of a professional genealogist). I take groups to the repositories in Edinburgh (Scotland's People Centre, The Scottish Genealogy Society, The National Library of…

The Hanging of the third John Billington!

You may remember my blog post; ‘the The Hangmen and the Hanged man – what’s in a name’ . Well, this week , quite by chance, at a visit to the Goole Family History Society open day this week, I heard of John Billington, the actor , who had hailed from this tiny East Yorkshire City. Of course, this type of knowledge is always intriguing to me, with my 3rd Great Grandfather, of the… Continue

I am not sure if I am related but Harvard University has an extensive collection on the family of Artemus Ward. 1724-1933.
Here is the Link: http://vc.lib.harvard.edu/vc/deliver/home?_collection=ward

You may want to print the "Ward family. Artemas Ward House and Ward family papers digital collection: A finding Aid" by Harvard College Library and it will give you the scope of this massive…

Ancestry.co.uk now has 1911 census originals available. Previously these were only on Findmypast.co.uk - these were essential to me in finding my correct ancestors!

All in a week’s work

Last week was another hectic one in the life of Ancestry Central with some time spent in London at the LMA researching British Citizens born abroad between 1836-1907 which will form part of my article for Family Tree Magazine’s November issue.


Aside from that I have been photographing more cemeteries, with the addition now of Monumental Stones  from St…
Continue

Finding Pieces Of Me

I recently added a byline to another genalogy site - Finding Pieces Of Me.  Isn't that why we do this, locating relatives live or deceased , knowing that our ancestors make up genectically who we are.  Wondering which side of your family you are most like.  Searching for pieces of yourself.

Attempting to give a name, find a name , a place in time when someone of your family breathed and walked upon this earth.  Questioning your uniqueness and aspirations.  Were they lost on…

DICKERSON, ELIZABETH A. Died, in great piece, at her home on Main Street,

advanced age of 79 years. The deceased was one of the pioneers of

Jessamine county, having been born at the old Dickerson place on the

She was the eldest daughter of Fountain Dickerson and Mary Rice Dickerson.

Here she lived until her…

The “Truth” In Video Biography

As I was waking up this morning, I was aware of a dream that I was having. In the dream, I was sitting at a dining room table with the family of a client that I had done a video biography for. It was obvious that this person had recently passed and we were discussing the biography. A woman seated to my right said, “well that biography was wonderful except for that huge lie that she told about having lived in the palace at Versailles!”

At that point, I woke up and, after having a good…

Hot off the Press

Genealogy --- Sometimes Re Invents Itself

has expanded in the last 24 hours, I could not resist this tidbit.  For two  years we quietly languished for finding our old roommates and chatter friends and workers.  Facebook changes a format and we have had 60 people found that never knew they were lost.

I feel an inmeasurable lost.  I can't find people.  People who never knew about me but once had to have the dream of a great grandchild or great, great neice.

I feel an inmeasurable lost because there is someone with a name who has walked this earth, lived a life and I know nothing, can't find anything about them.

I feel an inmeasurable lost because when I have reached out to someone for that glimmer of hope there has been no response, and I have concluded…

CELEBRATING LIFE WITH AN IRISH HOOLIE

By pure conincidence, my dad's birthday and Mother's day are nearly back to back .... and sometimes, depending on the year, they fall on the same day.  Robert Daniel Heitert was born on May 9, 1922, in St. Louis, Missouri ...the youngest child of R. G. Heitert and Helen Wethmar Heitert.

"Big Pop" died in 2001after a lengthy struggle with congestive heart failure...just four days after his birthday.  He was a bit of a hell raiser as a young man ...at least that's what I've been told. …

A little bit of Lincolnshire 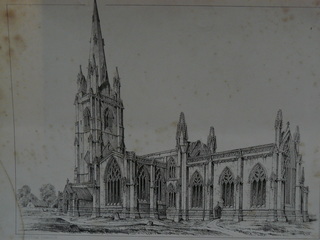 Heckington, Great Hale, Horbling, Billingborough & Burton Pedwardine,Lincolnshire, England.
Heading south from Sleaford in the direction of Bourne are the historic Lincolnshire places of Heckington, Great Hale, Horbling, Billingborough & Burton Pedwardine. The Total distance from start to finish of the journey is 2.5 miles but what the journey lacks… Continue

I am also searching the Teagues. My Grandmother's maiden name was Teague. I have linked them all the way to William Swain Teague -from Moody, Texas- & then on to John & Edward Teague from Ireland. I haven't yet worked out all the kinks closer to the Ireland links, mainly due to clashing internet sources. I've only been on the search for about a week though. I'd say I was doing pretty…