CREMEANS FAMILY FROM IRELAND TO THE APPALACHIA

The Evangelical Lutheran Church in America’s (ELCA) birth, marriage and death records are only available on Archives.com. Originally, the records were kept by ELCA congregations across the United States. Until now, it was necessary to know which church your ancestors attended in order to find their…

Ancestry.com partnering with FamilySearch to bring 140 million pages of US Probate Records covering more than 130 years

Ancestry.com is partnering with FamilySearch to bring 140 million pages of US Probate Records covering more than 130 years.

·        Over the next 5 years, we will be spending $100 million to digitize, index and put online new content on Ancestry.com, Fold3, Archives and Newspapers.com

I got some exciting news! So out of desperation I sent off what I knew about my Great Grandpa Louis Boon and Great Grandma Mary Bauwens to the Dickinson County Michigan Rootsweb email group and GUESS WHAT?! I got an email from a group member that had info on the families INCLUDING where they lived in Belgium! This person lives in Belgium so he can do research in the area that mine lived in. I think our families married into each other or something but he's not directly related.

Historic records from the South West now available on … What are the odds....a sibling decided to move to another state, a small town surrounded by mountains.  A few years later, my mother decided to join him.  Neither sibling or parent had ever been interested in their family history, until I filled them in that they had moved to the same small town that my mothers 3rd great grandfather and family were buried.  They thought I was kidding and asked me to prove it.

On a recent trip to visit them, I took my mother to the small church and…

Looking for a low cost education opportunity with nationally known speakers?  Then plan on coming to the UGA…
Continue

Anticipation making my heart beat faster, eagerly I opened the envelope. Opening the first paper, I read my great-grandfather's Declaration to become a Naturalized Citizen of the United States.  The feelings I had were almost overwhelming. a mixture of elation, relief and satisfaction as I realized I had finally broken through the impasse and yet another piece of my family's history was now complete. After sixteen years of searching, I had his marriage record, census records, newspaper…

Where is Lisa B Lee?

The last speaking engagement on Lisa B Lee's website, gotgenealogy.com, was Sept 2012, and the latest newsletter posted was Feb 2012.  She was supposed to speak at the Santa Clara County Historical & Genealogical Society in Feb 2013, but didn't show.  Is she okay?

PICTURE PERFECT: A CLOSE AND CLEAR LOOK AT MY ANCESTORS 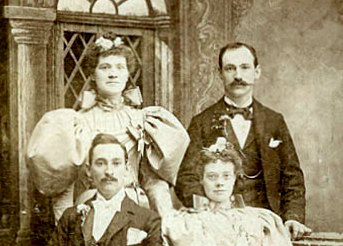 Looking for any information on a John T. Newhouse born in Tennesee ?   married to a Alice Hendrix (morris county, TX.) and lived in Grayson County Texas (Sherman) I have no information on  John Newhouse family or when he came to Texas or where he first settled.

“Journey through Generations” – A Conference for the Nation’s Genealogists