The Ethnicity of African American

You need to be a member of African American Mosaic to add comments!

I just recently became interested in African American ancestry through someone who wants me to help find his relations in Alabama before and around the time of the Civil War.

My Maternal heritage starts with Lottie Burris who was born in 1846 in Tishomingo, MS as a slave in the Stephen Burris household. She was brought to Gonzales County, Texas in 1859 and married Garner Thomas after the civil was in 1867. They purchased 158 cares in Guadalupe County in 1882. Her son Dee Thomas was a prosperous farmer in Caldwell County, Texas.
I don't know as much about my paternal heritage, but I have traced it back to Anthony Hall who was born in 1822 in Georgia. The earliest records I find of him is the 1870 census where his family was living in Lapile, Union County, Arkansas. Anthomy nad his wife Patsy had 3 children, Alfred (1854 - 1929), Bolding (1858) and Lucious (1866). My grandfather, Herman (son of Alfred), moved his family to Allen Parish Louisiana in 1917. He had many wives and children, but I am only aware of the children from his 1st marriage to Laura Norsworthy in 1908. They were Alice, Willie, Theodore and Clarence. 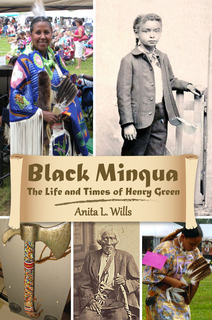 Just released my latest book, Black Minqua: The Life and Times of Henry Green. The book covers the lives of the Green men who resided throughout Chester and Lancaster County In Pennsylvania. Henry Green a was one of the Free Blacks arrested for his participation in the murder of a White Slave Owner. The event took place on 9/11/1851, and is now called the Christina Resistance. Besides Henry the book includes information about the Underground Railroad, and Frederick Douglass.

Following is a link to the site:

My  third book, Minqua People of the Welsh Mountains is scheduled to be released this summer. The book is Creative Non Fiction, a historically accurate book about the Authors Great Great Grandfather, Henry Green. The story covers the exploits of Henry Green, including his service in the United States Colored Troops, and involvement in the Christiana Resistance. Henry Green lived a life of resistance which was not documented until his arrest in 1851. The book covers the event of 9/11/1851, when a slave owner was shot and killed in Christiana Pennsylvania.

Notes and Documents of Free Persons of Color, and Pieces of the Quilt: The Mosaic of an African American Family are still available through Amazon.com. The works are based on over thirty years of researching and documenting my African American family Genealogy.

Many of my ancestors were slaves in Missouri, Virginia, Tennessee and Kentucky.

Among my slave ancestors in Tennessee were Alex Jackson (1848-1876), Betty Grady Jackson (1852-1917) and Charity Grady Duquid (1830-1914). In Kentucky, there was Emily Gladdish (1848-1902). In Virginia, There were John Fuller (born 1815) and Caroline Galloway Fuller (born 1820). Also, I had a Black ancestor who was FREE ISSUE, meaning that he were born free prior to the Civil War. He was my great grandfather Attorney John Henry Collins (1848-1913), the son of a free Black mother and an Anglicized French Jew. Per the 1880 Halifax, North Carolina Census, the father of Attorney John Collins was born in France. He was born free in Norfolk, Virginia, and was States Attorney in North Carolina from 1878 to 1886. He later practiced law in Ironton, Ohio. Another ancestor who was free prior to the Civil War was a ggg grandmother Henrietta Robinson Gordon (born 1815). She was a free live in mulatto mistress of my ggg grandfather Attorney James Madison Gordon (1810-1875) in Columbia, Missouri. In the 1860 Boone County, Missouri Census she can be seen as a free woman living in his household.

Bennie J. McRae, Jr. has been debunking this myth for over 12 years. Herein is evidence that we should review. Mr. McRae not only 'walks the walk and talks the talk'; he SHARES his findings so we all can be better informed. Take your time and read over the more than 60 pages contained in this PDF. Then, pass it on! Go to: http://post.ly/1E8hB

Comment by Julia Mitchel on November 11, 2010 at 12:24pm
Last saturday at our History Center in Frankfort, KY we heard a seminar by Deborah Abbott of Cleveland, OH on her research project for her minister. It was amazing, and the sources she found were some I had never heard of. I do not know if she has a website, but she is a nationally renown speaker on African American research. If anyone gets the chance, please go hear her.

Comment by Anita Wills on October 5, 2010 at 11:12am
Julia,
Thank you for sharing that information. The Library of Virginia is an excellent resource for those who have ancestors from that region.

Comment by Julia Mitchel on October 5, 2010 at 8:13am
Just a genealogist ladies, but very interested in all research. Wanted to let you know that the Library of VA has posted African American Marriages on line. I do not know what it is called but it is a must for your research. Go to their website Lib of VA and check their online databases.

Comment by Joyce Reese McCollum on July 22, 2010 at 9:52pm
33,000 S.C. Estates/Wills
Slaves named You can help put them online www.lowcountryafricana.com for details.Forever Free Online At Footnote.com