Sibling Saturday, Yup, I have some.

Going to try a different approach, this time.  I have three siblings all younger than I am.

One sorta interested in genealogy, the rest, I am not sure about.

for their children.  Why people are not excited to learn about our medical background leaves me dumbfounded.

Any time we can prevent or forestall having a disease, we owe it to…

Thanksgiving Blessings on All

The Holiday is here, though our world does not show it.

Wishing you all the best that we can make it.

Hoping your Thanksgiving is thankful and rewarding for all that we have.

Thanks for dropping by, do come by again.

The next few years were spent getting to know people.  There was the day my dad's older sister came to the house.  She was the first one we connected with.  She lived only two hours away.  She didn't tell us her last name or any personal information.  Everyone was scared.  What will they think of us?  Will they want something from us?  And then she walked in the door and 45 years of separation started to melt away - awkwardly at first, but then in front of me I saw a 14 year old girls who…

Phishing, do you know what it is? or does?

Today, Shirley Becker gave a small presentation on phishing. Telling members what damage it can do and what to look for in your emails or phone calls.  Remember a bank will never email you data a Phishing person asks, if in doubt, first always call the bank and ask. I myself have never found the bank to do this and they say it is not their policy  to email you for the types of information Phishing people ask.

1. You can call your bank and verify if they…

After my dad said "Is it you," there was silence.  I don't think it was probably more than a couple of seconds, but it felt like days.  And then I heard something amazing.  "Oh my God, Terry, how the hell are ya?"  Guess what?  Terry had been in contact with everyone?  For twenty years!  I spoke with Terry that night, which, by the way, was a feeling I can't put into words.  He told me he heard dad say "My name is Jerry," and he didn't hear anything else.  He knew it was his brother.  By the…

"What did I collect as a youth?", Randy Seaver Asked.

What did I collect as a youth?, is more like what did  I  not collect.  First it was Butterflies. I had 7 boards of butterflies.'

Then I have always collected rocks, ie gems, minerals and those types of things. I even when an adult learned to cut,

polish and mount some of my collection.  Did you know you can once in a long while find a rough diamond at the

beach?  My Uncle found on on Stinson Beach in the 1950's.  Therefore I also collected sea…

My dad's next trip was to the Annie Wittenmyer Home.  It had not been an orphanage for many years and had been turned into a library.  Dad walked the grounds and pointed out which dormitory was his and which was his brother's and sisters'.  He reminisced, not fondly, about the house mothers.  They went inside and asked if there was anything left from the orphanage days.  There was one, small file with a notebook in it.  Every year, the home held a reunion for former kids and employees.  In…

I have to start by saying I understand the premise of adoption law.  It protects birth parents, adoptive parents and children.  It has, however, become the bane of my existence.  A very nice lady named Kim, who worked in the adoption office verified that she was looking at my dad's file.  She verified there was information on all seven children.  She read some basic, descriptive information - my grandfather was a tall, angular man -  just enough to leave us wanting more before adoption law…

Fast forward to 2001.  I have graduated from college and moved back home.  I was working full-time.  All of the sudden my dad ends up in emergency heart surgery.  Always a fast healer, he bounced back fairly quickly.  I've always heard that being faced with your own mortality can change your life, but I was hoping he'd quite smoking, eat healthier, etc.  I had no idea his surgery would change his MIND.  One day, out of the blue and very matter of factly, he says "I'm going to find my…

New information has been shared about this lovely family. If you have seen his home in Rhode Island you would be amazed with it's size and quality. He even imprinted his initials in the chimney of the house. You can still see it today.

A distant cousin shared some great information on the JONES lineage from Christopher Jones Jr down and we are looking for other descendants to help fill in the blanks.

In case you think  you may be related do…

The Very Beginning (I promise this will eventually be about genealogy)

I don't remember not knowing my dad was adopted.  I don't remember an earth-shattering revelation that my grandparents were not my grandparents.  I vaguely remember my dad explaining what "adopted" meant, but it didn't seem like a big deal.  If you asked him, my dad would tell you the very few things he remembered about his siblings and his dad, his grandmother and step-grandfather and that he remembered almost nothing about his mom, except that she was hardly ever around.  Here are a few of…

Blessed Veteran's Day to all Veteran's

This is to wish all Veteran's of all services, a Blessed Veteran's Day and life.

Our family is Military orientated since the pre Rev War time, down to current members of today.

The founder members are delighted to announce the launch of The Surname Society - the online society for individuals,… 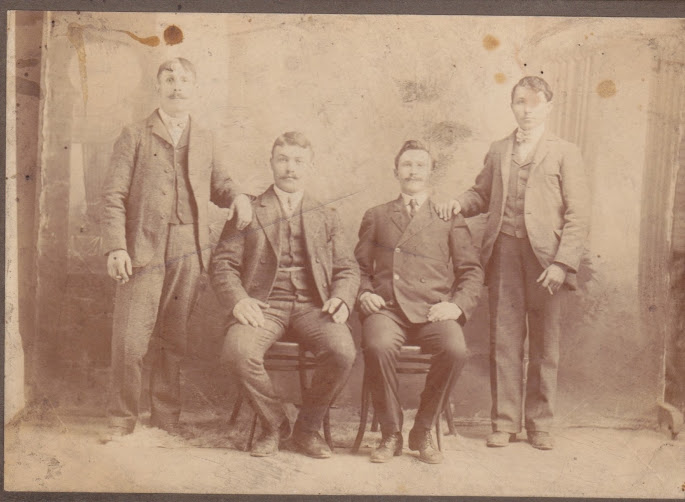 Since women could not vote for a very long time in our current society, I want to ask you, "Do You Vote"?

Some blogging people on Facebook today on the far east coast were mentioning the young and some of the very old whom have trouble attempting to get to the polls and vote on meaningful subjects or even caring.

Decided that  voting was my topic for today.  Does your family or did your family keep you informed of voting practices and topics that would affect…