My great-great-grandmother was Elizabeth Szilagyi, she was born 11 Feb 1853 (according to the obituary found in a Michigan newspaper).  Her parents were listed on her death certificate as Teme Szilagyi and Ersebet Cauka.  Elizabeth married Sgimond or Zsigmond Bertalan between 1872 and 1874 (census gives her age of first marriage as 20)  in Hungary.  Zsigmond died before 1910 because on the ship record for their son Imre, he lists his mother, the widow Zsigmond Bertalan.

Elizabeth and Zsigmond have three children; Imre born Jan. 19, 1875; Eszter born about 1878; and Lajos (possibly born 1881) who I discovered in the obituary and also found a picture of in my grandmother's house after she died. But I've not been able to find anything else about him.

Elizabeth comes to the US on Sept. 23, 1913 in New York aboard the ship Finland with her daughter Esther Politzer (now married) and her grandson Imre Bertalan.  Her last name is written making it look like Nagy, but I think it's Szilagyi (her maiden name). She and Imre Jr.  are bound for Snow Hill Maryland to meet up with her son Imre who arrived in 1910. Daughter Esther was going to NY, and this is the last I've been able to find of her.

She may have had a brother or perhaps an uncle named Janos Szilagyi, as we have a picture of a young man and on the back is written "This is Jonny Szilagyi son of uncle Janos."  See the photo below.

I also have two pictures of Lajos Bertalan.  Here are the links to previous blogs with these photos; 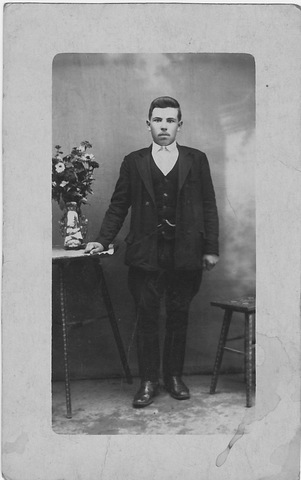