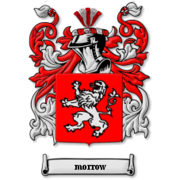 This group is for anyone looking for help researching or anyone wanting to share their Morrow Family History. We are also researching the other spellings: McMorrow. Irish: shortened Anglicized form of Gaelic Mac Murchadha.

You need to be a member of Morrow Family Genealogy to add comments!

Hi, Have just joined the Morrow family group.  My name is Michael John Patrick Morrow and thanks to a few relatives we have managed to link together our strand of our joint family stretching back to the birth of one John Morrow in Ballymoran, N. Ireland in 1751.

Soon I will be post full details of my scant knowledge in the hope that one or more of you has a link to this chain of Morrows and that together we can help flesh out each others' family trees.

I am based in London but my great grandfather moved from Ireland to Liverpool.  My grandfather then set up home in London around the beginning of 20th c..

Looking for parents of William B. Morrow. Born September 1817 in Cumberland County, Pennsylvania. Married Anna Maria Evans. Had Susan, Ann, Margaret, John, Emily, William, Jennie, May, Minnie, and George. Fought in the Civil War and was wounded in Petersburg. Was a shoemaker. Lived in Lees Crossroads on Walnut Bottom Road near Shippensburg, PA. Died 1 Aug 1886.

My great great grandfather John Morrow born 1798 NY died in MI looking for his father, not sure if its William or John Sr. also looking for any information on Morrows from Cheboygan.

Comment by Kathryn Ellis on March 11, 2013 at 8:55pm
Hi I am researching Malcolm Morrow who moved from Scotland/Ireland to Canada. He lived to be in his 90s. Had a son named Malcolm Morrow who married Janet Mathieson and moved with his family to Montana(1860s).I have an article written about his grandson Malcolm Morrow(III).

Comment by historygirl on March 22, 2010 at 3:13pm
I need help finding Thomas Morrow born abt. 1813 in North Carolina that married a Lavinia born in South Carolina. They were living in Blount Co., TN in 1840 but moved to McMinn Co., TN in 1850. Does anyone have these names in their family list? DNA proves to be from John* Morrow b: ABT 1725 in Prince Edward Co., VA.