Do you have ancestors that were veterans in the Canadian army, air force, or navy? Canadian servicemen and women have served in the Fenian Raids in the 1860’, the Boer War, the First and Second World Wars, and the Korean War.

There is a great deal of information available about Canadian veterans online.

For the years before 1914
Canadian Military Heritage Project
http://www.rootsweb.ancestry.com/~canmil/

For the First World War
Canadian Expeditionary Force Study Group. This is for the real die hards amongst you it is very technical.
http://www.cefresearch.com/phpBB2/ or http://cefresearch.com/matrix/index.html
Canadian War Museum(also information on W.W.2) http://www.warmuseum.ca/cwm/home/home
Canadian Great War Project http://www.canadiangreatwarproject.com/
Canadian War Brides of the First World Ward blog http://ww1warbrides.blogspot.com/
Library and Archives Canada. For online records of soldiers and other information useful in your research
http://www.collectionscanada.gc.ca/02/02010602_e.html

For the Second World War
Canadian Virtual War Memorial
http://www.vac-acc.gc.ca/remembers/sub.cfm?source=collections/virtualmem
Commonwealth War Graves Commission http://www.cwgc.org/
Library and Archives Canada above.
Legion Magazine: Last Post: Dealth Notices. Most info here relates to servicement who passed away after January, 1989.
For a transcript of a veteran who served in the Second world War you can send away to Archives Canada for copies of their service records. Should you need help getting them let me know and I will guide you through the process.
This is a short list. There is a great deal of information out there.

Also keep in mind that for both World Wars you might also have to access British records as it was not unusual for servicemen to be loaned out to the different services. My uncle, for example was with the R.C.A.F.; however, he flew his Hurricanes with the 65th squadron which was a British outfit, and my father’s Lancaster had a R.A.F. serviceman as co-pilot on his last mission over Germany.

You need to be a member of Canadian Veterans to add comments!

Did all servicemen keep journals?  My grandfather was in the Boer War with the British 2nd Dragoons and in WW I with CEF Fort Garry Horse.  He was a FQMS with the FGH but I understand his regiment was mixed with others and he was at Somme under the British command.

Did you try the Canadian National Military Library and Archives?  Sometimes it is hard to find info and a lot of the papers have not been transcribed yet.  Also surnames are changed but to how they read the script.  Send his name, birthdate and possible of where born, plus what branch of military was he in to me and will try to help you.  I work with the Legion here and sometimes I can find info through them.

I have hit a little bit of a road block with finding my grandfather's service records.  We know his birthdate and discharge date, but we have almost no other information about him.  He died when my father was 5 and my father was then given up for adoption.  Our major struggle is that the place of birth on his death certificate has no record of him or his parents and we have no idea how he got to Canada.  I have e-mailed the Canadian Archives, but have received no response.  Does anyone have any other research ideas? 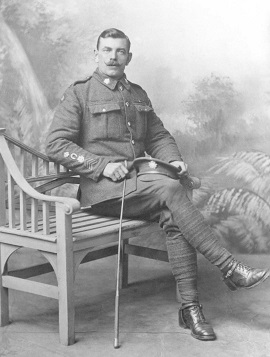 This picture was taken while Harry Louden was visiting family in England.  abt. 1916-17

Grandfather's number in WWI was 117360  and he was a Farrier Quarter Master Sgt..  I have his attestation papers.  I have often wondered if he would have kept a diary or not and would he have to hand them in to his superior.  Since I started this search his papers for both Boer and WWI was the first thing I received.  His surname was changed from Charles H. Louder to Louden when he served in the British army.  Since then I have found even the Canadian papers have different spellings.  Louden, Lauden, Laudin, Loaden etc.

I would like to get to know what he was really like as I find him to be fascinating person from what I have heard by the family and some friends in Big Valley where they farmed.  What would he have received the Meritorious Service Medal for?

Comment by William Bruce Hillman on April 19, 2010 at 5:41am
World War One Canadian War Graves In England

There is a project ongoing in England to photograph and profile all of the Canadian war dead of the First World War who are buried in England. The project website canadianukgraves list each veteran and the county in which he is buried. CD’s with more complete information can be ordered from the website .