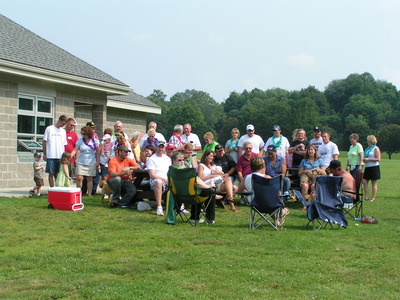 Comment by Tara Pfarner on July 18, 2009 at 2:44pm
The day before our reunion, I am encouraged......through our facebook group, I have heard from three cousins that I don't think I would have heard from otherwise, to let me know that they are coming, ask what they should bring, an to spread the word to bring baseball equipment for a game!

Comment by Patti Wilcox on July 9, 2009 at 9:36pm
Wow! Your enthusiasm is wonderful. Don't give up. Perhaps consider these changes: have the reunion every 2 or 3 years. This works well for my husband's family. Keeps it from getting stale. Find the hidden talents in each branch of the family. Size up who has the most "power" in each branch. Then find out their talents: cooking? - help that person collect family recipes over the next 2 years & be the one to organize the family recipes into a book-many possibilities here. Loves kids - games for kids at the reunion that help pull them together not compete - handprint collage that can be copied and made into Xmas or all occaisions cards, etc. That each set of grandparents can hand out and treasure. Tapping into the talents of persons in each branch of the family will give them a sense of ownership and satisfaction and keep or get them committed to your project. Have fun. Let it evolve. Remember "it's a tough job herding cats" and one has to let them come looking for affection at their own pace. . . . but a little stinky tuna never hurts.
Regards,
Patti