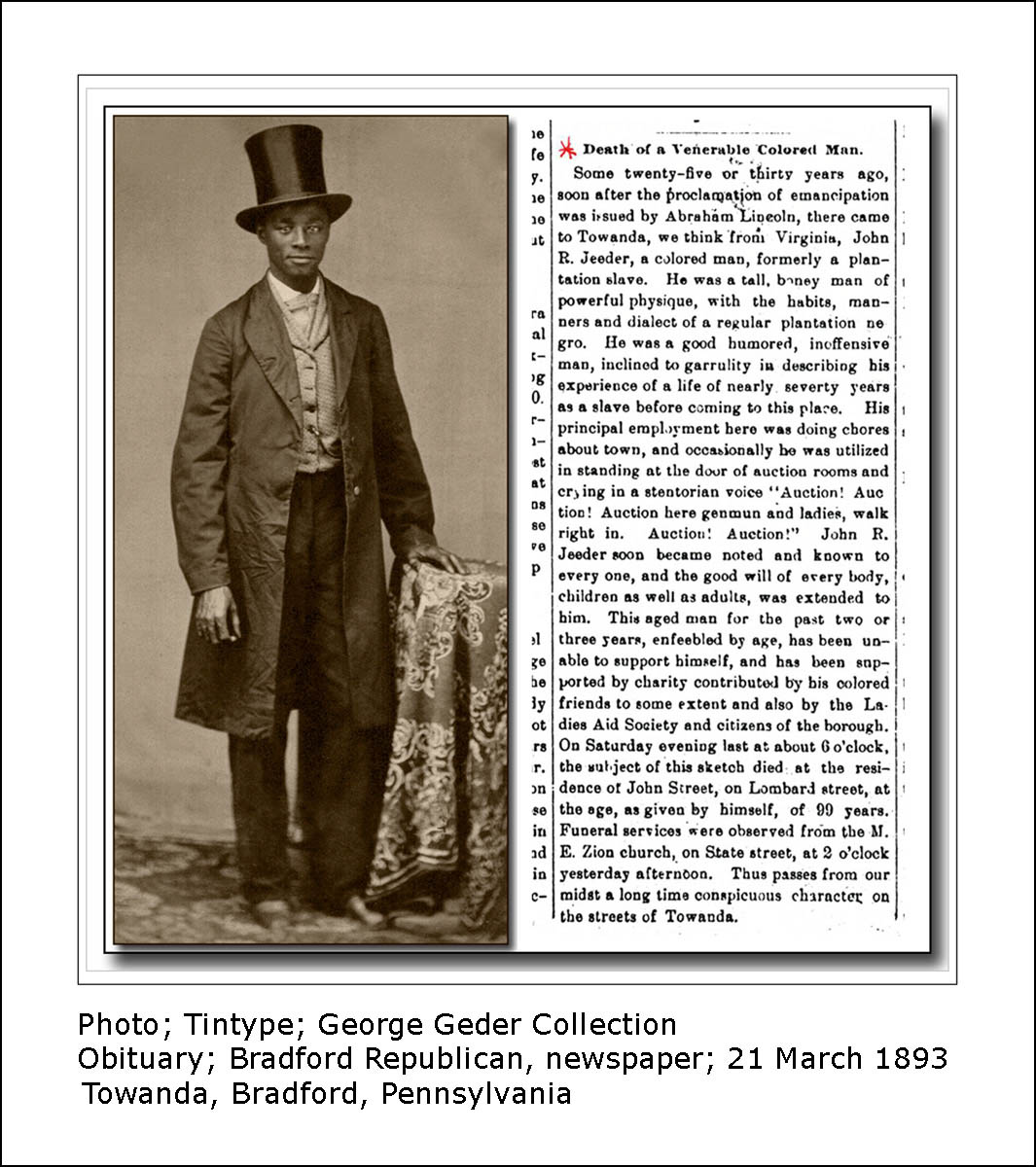 "Bradford Republic; March 21, 1893
-Death of a Venerable Colored man.
Some twenty-five or thirty years ago, soon after the proclamation of emancipation was issued by Abraham Lincoln, there came to Towanda, we think from Virginia, John R. Jeeder, a colored man, formerly a plantation slave.
He was a tall, boney man of powerful physique, with the habits, manners and dialect of a regular plantation negro.
He was a good humored, inoffensive man, inclined to garrulity in describing his experience of a life of nearly seventy years as a slave before coming to this place.
His principal employment here was doing chores about town, and occasionally he was utilized in standing at the door of auction rooms and crying in a stentorian voice

John R. Jeeder soon became noted and known to every one, and the good will of every body, children as well as adults, was extended to him. This aged man for the past two or three years, enfeebled by age, has been unable to support himself, has been supported by charity contributed by his colored friends to some extent and also by the Ladies Aid Society and citizens of the borough.

On Saturday evening last at ab out 6 o’clock, the subject of this sketch died at the residence of John Street, on Lombard Street, at the age, as given by himself, of 99 years.
Funeral services were observed from the M.E. Zion church, on state street, at 2 o’clock yesterday afternoon.
Thus passes from our midst a long time conspicuous character on the streets of Towanda.
~~~

John Jeter, an aged colored man of this place, died on Saturday last about six o’clock, quite suddenly.
He was about town as usual on Friday. The old man was a familiar and well known figure upon our streets; for many years he has done the bell ringing and street calling for every auction that has been held.
Mr. Jeter was about ninety years of age.
The funeral services were held yesterday afternoon; interment at Riverside cemetery.
~~~


The 1870 & 1880 census records state that he and his family members were born in Virginia.
That's clue #1. And if you read my post about his wife, Emeline, you know what I'm up against.
Thanks go out to the Bradford county Historical Society for providing me with this obituary.

Since I live in Santa Fe, I'll be enlisting the help of those residing and researching in Pennsylvania.
Let's keep the discussion going!