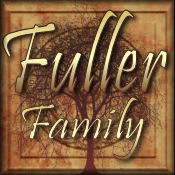 This group is for individuals interested in researching the Fuller surname.

You need to be a member of Fuller Family to add comments!

Hi.  My grandmother was a Fuller.  Her father was George Fuller from Easton, Maine.  His relatives moved there from the Dover-Foxcroft part of Maine.  My assignment for one of my classes was to join a group.  I hope to get to meet some new family members through this method.

Hi, I am LaRose Seltzer from the Tampa area. I am related to Edward Fuller..his son, Samuel through his daughter, Hannah who married Nicholas Bonham. I go through the Bonhams until Mary Polly Bonham married a Fulton. My great-grandmother was their daughter, Rue Ellen Fulton. I just want to introduce myself and say hello. Happy to discover this group.

Have never connected the two Fuller lines together but finding a 3rd line in Maryland area that does connect to the Mass. Fullers  so who knows?

Others in between various lines. SusiCP1@gmail.com

I am just beginning to do my family tree. I am very new at this. I was hoping maybe you can help. My 8th great grandfather is Thomas Fuller 1618 - 1689. He was born in England, Redenhall I believe, He came to America in 1638 and settled in Worburn, Mass. I am trying to find out who his parents were. I can not prove for sure who they were. I would appreciate any information you can help with. Thanks.

Edward Fuller and his son Samuel are my 10th and 9th great grandfathers, respectively.  I am a direct descendent through my great grandmother, Marion Genevieve Fuller Waite. My family's genealogical record for the Fullers goes back to John Fuller III (1518-1599) of Redenhall, England. I've been delving into the women these men married, as well as their families. I am stalled at Sarah Dunkhorne. Any suggestions would be appreciated! If anyone has at questions, I am happy to answer them if I can.

My Fuller connection is Emiline Fuller born in 1814. We think in Canandaigua. Her father was Sylvanus Fuller and we think her mother was Polly Bentley. She died inBattle Creek Michigan. She married first Jeremiah Thompson and 2nd Lorenzo Ireland. Does anyone know how I can find out more about Sylvanus?

I am attempting to find the Sarah Fuller, born in Connecticut, in 1754, who  married John Colvin about 1774, in New York

I have found references in Hudson-Mohawk Genealogical and Family Memoirs by Cuyler Reynolds (pages 457-462) that that states:  “.. [John Colvin] . . 1772, .settling in Nine Partners, New York, where he married Sarah Fuller.  She was born in Connecticut, April 25, 1754, and was a descendant of a Mayflower Pilgrim”  A similar statement may also be found in American Ancestry, Thomas Hughes 1887, page 16, and in History of the County of Albany, page 838, and others.  They appear to be copied from each other and republished in several other places.

In the History of Cornwall, Edward Starr, 1926 page 464, it does show another Sarah Fuller b. 4, April 1754 to Aaron Fuller and Ruth Sawyer.  When I supplied that to the Mayflower Society they declined to accept this source because the Barbour Collection for Colchester births and Cornwall Births did not show a Sarah Fuller born to Aaron Fuller.  Their records show a “Mathew Fuller, 27, March 1754” and they did not have a record for a Sarah and with the birth date cited in the History of Cornwell for Mathew is only a few days before the date for the birth of Sarah they believed it was not viable.

I have researched the Barbour Records (AmericanAncestry.com NEHGS) and cannot find a Sarah Fuller born in 1754 that appears to be correct.  I have also reviewed many family trees online and find many of them to not be factually correct.  I have found many Sarah Fullers born in the timeframe of 1754 and most have been ruled out, e.g. daughter of John Fuller and Sarah Clothier that show Sarah was born about 1740- 1754 in Avon,  and that Sarah Fuller did marry an Isaac Woodruff, and would appear to eliminate her since my Sarah Fuller did marry John Colvin.

I only have a marriage date of about 1774 to John Colvin and am not clear if they were married in New York or Connecticut but most evidence would support a New York marriage.  I do have and believe it to be correct, a death date for Sarah Fuller Colvin of 10 Feb. 1819 in Coeymans, Albany, New York.  There are several references in Colvin books that also mention that Sarah was born in CT.

Any thoughts  regarding resolving this matterwould be greatly appreciated

Looking for John Fuller living in Rome New York with wife Hannah? and eight children. died in 1814 according to pension records.

I am looking for information on Norman Patrick Fuller  born Feb. 21, 1896 in Chicago, Cook County, Illinois and died in July 1964 in Oklahoma.   My oldest brother is the son of Norman Patrick Fuller.  Any assistance you could give me or direct me to would be greatly appreciated.