A few weeks ago, my mom flew here from Texas, the two of us drove to Michigan to pick up my aunt, and then the three of us continued the drive up further into Michigan. Northern Michigan to be exact - to visit this wonderful woman who just happens to be our oldest living family member!

According to my genealogy program - Irene is my 1st cousin twice removed. Now, after being hit with the genealogy bug for the past 2 years, I still haven't quite figured out that "removed" thing when it comes to cousins. All I know is that my great-great grandfather, William Bryan Andrew Parrish, was her grandfather. My grandfather was his son from his first marriage, Irene's father was his son from his 2nd marriage. So maybe that's where the "removed" card comes into play? (Confused yet?)

In the midst of my research, I discovered these 3 wonderful family histories that were written by Irene. Within the chapters of these books were references to a future volume that would be the history of the Parrish family. Upon discovering these, I wasn't sure if Irene was still working on these histories, still had plans for that 4th Volume, or if she was still alive! Silly me for not giving credit to the Parrish women! At 91 years old, not only is she still alive and kickin', but yes - she's still working hard on that last family publication! And after making contact with her, I was invited to come meet her and pour over what I'm sure are just miles and miles of information on our common family!

Who does that? Who drives 10 hours to meet a total stranger, only because they share a common ancestor? Not only driving 10 hours, but driving up into Northern Michigan! There's nothing up there, except a lot of trees! And for that matter, what would possess a 91 year old woman to want to live up there still - year after year?

As it turns out, Cousin Irene is just as amazing of a woman as I imagined her to be - probably even more so. She was only recently put into a nursing home after she had fractured her back, and needed the rehabilitation, medication, and relaxation. Quite honestly, I wasn't sure what to expect upon our meeting. But when I walked into her room, she sat up right and held out her arms to me, welcoming me with as big of a bear hug as she could muster. Her first words to me while we hugged were, "I'm so glad to meet you, cousin!"

My great-grandfather, Charles, was Irene's uncle, so when I introduced my mom and aunt as her "Uncle Charley's grandchildren", she was very surprised, and we had even brought along an old picture of her "uncle Charley" which she had never seen before. Irene was thrilled, and made us promise to give her a copy of the photo for her to include in her book. Then she surprised us.

Irene had written in her book about a set of wedding pictures of her grandfather, William - my great-great grandfather. The story was that the pictures hung on the wall of his son's home for many years, but by the time Irene had begun to write the family histories, the owners of the pictures had both died, and the pictures were nowhere to be found, but Irene was hoping to search for it before publishing her final volume.

That day we visited her, she took my hand in hers and asked me, "Have you seen the picture?" I didn't know what picture she was referring to, and I had not yet been to her apartment. That's when she told us the rest of the story.

As it turns out, once the owner's of the pictures had died, another family member had taken the pictures - only to use the frames they were in, and then moved to Kentucky. As luck would have it, Irene was able to track down where they lived and made the trip to retrieve this priceless family pictures, arriving just after a tornado had gone through the area, and the pictures being lost from the home. Only miraculously was the picture of William found, face down in a creekbed, and returned to Irene. Although water-damaged, the artist in her promptly set to work at restoring the picture, which now proudly hangs in her apartment. 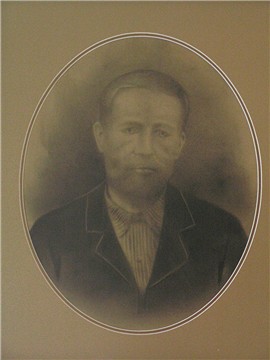 Going in, I didn't know what my part was in this. Irene mentioned to me that there is no one else in our family who was researching this family line. Is that it? Am I supposed to help her finish it? She commented that there was no one else to take the picture of William after she had passed on, as none of her immediate family was interested. Did I just get written into her will as the future heir of a 150 year picture? She also was excited to see that I had purchased one of her 3 family history volumes, as in her words, "nobody buys my books." And that's when it hit me.

This trip was not about me gathering information for my records. It was about meeting this woman who has devoted 50 years of her life to OUR family. It was about sitting and listening to her tell her stories of our family members, stories I had never heard of, and stories my mom had long forgotten she had heard. It was about seeing the common threads that link us together as family. And perhaps, just maybe, it was about being a light in her world. A bright spot that perhaps had been dimmed by what appeared to be a lack of interest in our family's history, now once again brightened in her eyes. 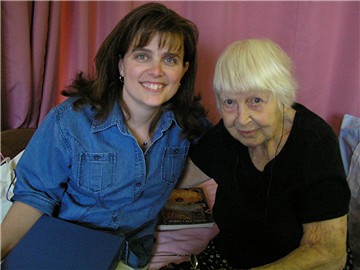 Comment by Candy Hulbert Ditkowski on July 8, 2009 at 8:52pm
Thank you! THAT made sense to me! (Someone should explain that to the PAF people!)

Comment by Lorine McGinnis Schulze on July 8, 2009 at 6:09pm
"Removed" is simply the number of generations apart two individuals are. You and a cousin would be first cousins. The word "removed" isn't used here because you are on the same generation line.