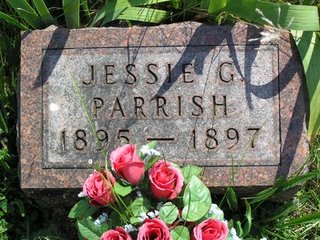 There has always been a story told over and over again by my mother and grandmother. I doubt it was told to us as a warning regarding the dangers of playing near railroad tracks - we never lived near railroad tracks. I think perhaps it was probably one of the most devastating family events, so it was a story that was retold over and over to preserve the memory of this little boy as best as possible?

Oddly enough, before I began researching my family history, this story always went that "Grandma Parrish had gone to the store, little Jesse slipped out the back door and innocently made his way to the railroad tracks exploring, and was decapitated by the mail-arm of the train that was passing by. " As a young child, that story always caught our attention!

Years later, searching out ancestors, I found myself at Jesse's family. Something about that story didn't sit quite right, mainly the fact that little Jesse was just a toddler, and those crane-arms that were used to pick up mailbags were much too high to have done what such a horrific thing.

As a good genealogist does, I asked my mother to tell me the story again. It had been years since hearing it, and who knows - maybe there was a detail that as a child I didn't bother to pick up on, that would be of importance now. Nope, she pretty much told it to me word for word as I remembered it, the only new detail being the name of the railway - the Nickel Plate Road.

Google is an amazing thing, and sure enough within a few minutes, I had the history of this Nickel Plate railroad staring me in the face, including a map of it's different lines. In particular, it's main line which ran from Buffalo to Chicago and all points in between.

What I realized was that the little town of "Latty" was on this line. Knowing that my mother's family spent many years around this Paulding County area, that didn't necessarily surprise me, but intrigued me - confirming the name of the railway that went through here. But, I also had been to the old homestead where Jesse had been born (my great-grandfather), and knew that there were no railroad tracks near that house. So the story was still not quite ringing true for me. I thought surely, if a child had been killed on a railroad track, there needed to be a newspaper article - even in 1897! I was right, and after a few brief emails to a wonderful researcher in Ohio, the pieces started to come together.

Child Killed at Hedges - A fatal and distressing accident occurred near Hedges last Sunday afternoon. The little two-year-old child of Mr. and Mrs. Charles Parrish was struck by a Nickel Plate engine and instantly killed. They were visiting friends two miles east of Hedges near the railway track, and was struck by train No. 5 going west. Dr. Gordon of Broughton, County Coroner, viewed the remains, and rendered a verdict of death by accident. (Paulding County Democrat, Sept. 9, 1897)

Being the inquisitive (or maybe morbid) person that I am, on my next visit to Ohio I decided to see this area where this happened. After all, the story had been repeated so many times, I may as well get a visual for the layout of the land! I found old maps from that time frame, and looked in the area that was, according the newspaper, 2 miles east of Hedges. What I found, I couldn't believe. Right near that railroad track was the home of my great-grandmother's parents! These were not "friends" that they had been visiting as the newspaper reported, but rather they had taken young Jesse to his grandparent's house for the afternoon! 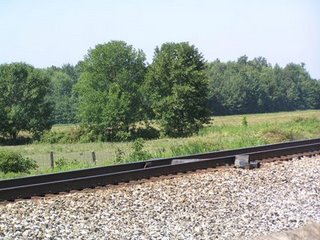 (The land which once belonged to Elias Medley - Jesse's grandfather, and the railroad track that ran alongside the property.)

I'm no longer intrigued by this tale as a young child who is listening to a ghost story. Instead my heart is broken - the loss of a life so young, the heartbreak of his parents, and the devastation of his grandparents at whose home he was at that fateful afternoon.