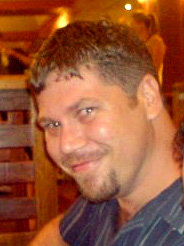 John Patten has not received any gifts yet

What countries and other locations are you interested in researching?
Australia, Ireland, England, Sweden, Bundjalung, Yorta Yorta

If you are a genealogy expert, what are your specialties?
Indigenous Australian (Aboriginal) genealogy

For what reason did you start genealogy research?
To gain a greater appreciation for my personal genealogy.

Do you have a genealogy website or blog?
http://pattenproject.com/family

I'm an artist / ICT Technician based in Melbourne Victoria and am originally from Northern NSW. I'm interested in Indigenous and Colonial Australian History and Genealogy, as they apply to both my personal genealogy and Australia's in general. Currently I am researching a book(s) (Creative Non-Fiction) about 3 generations of family on my father's side and intend to follow it up with one based on that of my mother.

Always happy to talk genealogy, or about anything in general. Drop me a line.

Jack Patten said…
Hello John,
Yes. I think that might have been me. Was your Dad a Union or Labor Party official?
Briefly, probably 20 years ago a friend of mine from North Stradbroke Island, Estelle Bertossi, an aboriginal woman of the island asked me if I was any relation to Jack Patten. I said I didn't know and she gave me a little pamphlett about Jack Patten.
It wasn't until 1995 and I was dragged kicking and screaming into email and internet, that I would Google my name as a Civil Mariage Celebrant, and found I was drowned out by this other Jack Patten.  I was fascinated by his story, and wondered about his education, and how he was able to communicate in such times to acheive what he did. I was born in 1934, so I can recall the period of the later years of Jack's life, and the social circumstances of the time..
Just recently I happened on your blog and tried to follow it up, but being an I.T.  dunce had trouble getting through. It was your comment about looking for antecedents from Somerset that attracted me. My great-grandfather Samuel Patten was born in West Chinnock, Somerset, and the Patten family was obviously pretty thick on the ground in East and West Chinnock and Chiselborough.
My wife Audrey has got us back to a Roger Patten in the 1600's and we can also show that the Patten's migrated to Australia in numbers, many to the area south of Sydney, Kiama etc.,
As a Korean War veteran I have noticed that a whole stack of Pattens reside in the Warnambool area in Victoria, and served in the RAN in Korea and since.
John, my email is trulyromantic@bigpond.com, website is www.trulyromantic.com.au  My phone number are 07-38223229 and 0417758737.
We would be happy to share with you any of our research. I think it would be a mighty co-incidence if we don't have a common ancestor in times past. A cousin of mine is the father of Luke Patten, a full back for Canterbury, and I was always happy if someone asked me about Wes Patten, who played for Balmain at one time, and I would claim him too.
Regards
Jack Patten.

Geniaus said…
John I have 7 Google Wave invites - pls email me with your email address (a gmail one is good) to bibliaugrapher@gmail.com and I'll nominate you.

Geniaus said…
John, I didn't have any Wave invites to hand out. I was able to get some for the first three people to contact me. If I can organise anymore you will be top of the list.Pls send me your email address to bibliaugrapher@gmail.com
Cheers,Jill

Jim Avery said…
I have set up an Avery discussion group. There are 26 Avery researchers on here. I thought by putting our heads together we might find some common relatives and breakdown our brick walls. Please feel free to drop in and post your Avery lines.

Well, the name John Smith isn't all that common here in Sweden.
The problem though in your case is that Stockholm is a nightmare to check.

You really need the correct parish within Stockholm the even begin to think about checking his life.

Do you have ANY information about when or exactly where in Stockholm your ancestor was born?

Thank you for your kind words. I am very happy to make your acquaintance.

Officially it wasn't slavery, but when you're not allowed to leave the place you are forced to live in squalor, and you aren't paid for your services - what else is there to call it?

Of course, slavery by another name is still slavery.

If you haven’t had a chance to read Pulitzer Prize winning author, Douglas A. Blackmon’s book, Slavery by Another Name: The Re-Enslavement of Black American from the Civil War to World War II, (Doubleday, New York, 2008) I would highly recommend it.

During his recent journey to Ghana, President Barack Obama reflected on the reality of slavery, not just in America, but around the world:

And is still very much with us.

So, wherever we’re witnessing or researching the enslavement of others, be it the US, Australia, or “too many other places around the world,” it’s man’s greed, intolerance and inhumanity which remain the common threads that bind all the stories together.

It’s important work you’re doing John. I wish you well as you continue your journey.