A Group for anyone that has web-footed ancestors from the flat area of of eastern England located particularly around The Wash, including towns such as Boston, Spalding, Wisbech, Whittlesey, Ely and Kings Lynn

Are you someone whose anc

estors came from the Fenlands of eastern England, which cover parts of five different English counties? The area includes north Cambridgeshire, south Lincolnshire, west Norfolk, small parts of Huntingdonshire and Northamptonshire ...and a sixth county if you include the Isle of Ely. Frustrating isn't it, visiting all those different record offices to track your elusive ancestor just to the next parish! Hopefully this Group will be a useful meeting point to share tips, knowledge and advice. 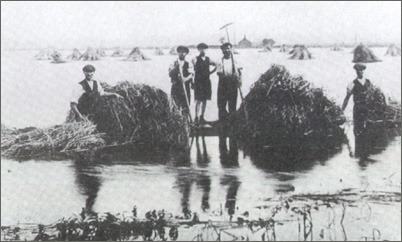 My ancestors came from the Cambridgeshire Fenland. My great x 5 uncle Charles sold his wife for 1 guinea in Wisbech market. My great-great grandfather Levi fell into a drainage canal and drowned while catching water voles. Whoever said the Fens were a boring place?!

Parish Churches in and around Peterborough
Wisbech and the Fenlands

PRESTON, WARD and SMITH from the Wisbech area. 1 Reply

You need to be a member of The English Fens to add comments!

Comment by Maureen West on May 16, 2011 at 7:40pm
My family comes from the villages around Wisbech, in the counties of Cambridgeshire, Norfolk, Lincolnshire, Northamptonshire and Huntingdonshire: see my surname list at http://makingconnectionsgenealogy.blogspot.com/p/surnames.html.

Comment by Sean K on April 27, 2010 at 2:57pm
Yes, that's right, they are recovering hay from a flooded field. I believe it is farmland in Cambridgeshire, not the Norfolk Broads, haha.

Thanks Anna for the mention of Emerson, I've just googled him and his photos of Norfolk are absolutely fabulous!

Comment by Rosie on April 27, 2010 at 2:45pm
I might be wrong and they could be bundles of reed stooked up because the stooks are in the round not in an oblong the way we use to make them, but aren't those chaps trying to retrieve shoofs of corn from a flood? When they cut reeds near me on the Norfolk Broads they aren't usually cutting them out of deep water like that ( see Emerson)

Comment by Sean K on April 27, 2010 at 2:36pm
The image is from a popular picture postcard, I think published around 1910. Like many postcards of the period the photo is likely to be taken somewhat earlier.

Comment by Anna Wego on April 20, 2010 at 5:10am
What a wonderful old photo of the men working in the water. I have been looking for some good old photos to print off around Isleham where my ancestors (PAMMENT) mainly came from. There was a fantastic photographer in the 1800's called Peter Henry Emerson and many of his photos are on the net. They are mostly taken in Norfolk. Can you tell me who took the photo on this page, when and where? Or where you obtained it?
Thank you and warm regards from Auckland, New Zealand

Comment by Sean K on January 11, 2010 at 5:24pm
Thanks for joining, Al. In reality, none of the locations you mention are in the fens. Sleaford is not far away though, so you never know, your ancestors may have passed by a marsh. But the remainder around Caistor and Market Rasen are well to the north of the county.

Comment by Al (alpobc) on January 10, 2010 at 1:37pm
Hi;
I've been researching my family history since 1992. My wife's Paternal side came from Lincolnshire.
They emigrated / immigrated to Alberta, Canada 1902 & 1907.
I've been a member of Genealogy Wise for a short while.
I am a bit geographically challenged when it comes to places in Lincolnshire and found a posting on the Lincolnshire group in reference to the Fens.
I am researching the following names in Lincolnshire; WHITE (bef 1828 Nocton & Nettleton), COOK (bef 1846, Cabourne & Limber), PATRICK (bef 1808, Habrough, & Cabourne), BEVERLEY (bef 1828, Nocton & North Kelsey) and ELVIDGE (bef 1808, Habrough & Cabourne). The dates are marriage dates (undocumented as yet) and the places are marriages and birth places. Other places these folks lived in Lincolnshire are; Sleaford, Market Rasen, Glanford Brigg, Middle Rasen, Lincoln & Nettleham.
I don't now if any of these places are in or near the Fens. Some of the occupations I have been able to find from the censuses are;
Farmer, Druggist's Porter, Sheep Dipper and Labourer.
I live in British Columbia, Canada on beautiful Vancouver Island.

Where was this photo taken? And what are they harvesting?