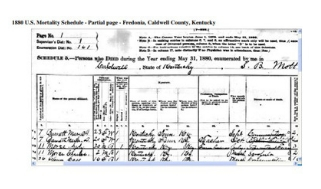 Even though these lists of deaths are widely believed to underreport the actual number of deceased, this is still a valuable source of information.  In many states where vital records were not kept, it provides a nationwide death resister for four years between 1849 and 1880.  The schedule lists the deceased’s name, sex, age, color, widowed or not, place of birth, month of death, occupation, and cause of death.  In 1870 the parent’s birthplace was added.