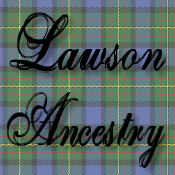 If you are researching any form of the LAWSON surname, welcome.

If your Lawson line has been in the US since 1747, when the Ship Gildart arrived with prisoners who were indentured slaves, punishment for the Jacobite uprising, then you may want to review the data for the Lawson Family Heritage Program. Their database is hosted on Rootsweb.com

The LFHP is specifically for the descendants of William "The Scottish Rebel" Lawson & his wife, Rebecca. (Her surname is not Banks as was reported at one time.)

"William was taken prisoner by the English following the Scottish uprisings of 1746. He was given a conditional pardon by King George II of The United Kingdom of Great Britain and banished to the colonies. He arrived on the ship Gildart in July, 1747 near Port Wicomico, St. Mary's County, Maryland. The land location is now known as Bushwood. We believe that the ship anchored offshore in this general area."

NOTE: The Lawson Family Heritage Program just created a Message Board. Registration is no longer required to post, but you do have to be registered to post attachments such as documents or photos.

Some important places for the Maclaren Clan, associated with the Lawsons 2 Replies

You need to be a member of Lawson Ancestry to add comments!

Hello, Scott Lawson here. I am addicted to this family research thing. Way too many late nights. I started with only my grand father's name and am now back to 1811 to my 3x great grandfather James J. Lawson. b. 1811 d. 1874. Born in Maryland. Seem to be stuck with him. His wife was Catherine Fry and they were in the Westmoreland PA area. Everything up to James is well documented via obituaries and death certificates. Line looks like this starting with me and going back. Scott -> Timothy -> Paul -> Edward or Edmon -> Jacob -> James. A cousin from Jacob's brother side told me he has a bible that references a William but I can find no documented link. If you happen to be searching the same lawsons please let me know. Thx

Comment by Robert l waggoner jr on March 26, 2012 at 3:05pm
My grandma was surrilda catherine lawson she was daughter of noah a lawson and kate fraley

My wife Moya's Great Grandfather was William Robert Lawson,and going by his marriage cert was born in New Orleans,America in 1857.
He married Emily Cameron on the 10/12/1887 in St Arnaud,Victoria,Aust. His father was also William a sea captain and married to a Isabella Young,these details are also on the marriage cert.
We seemed to have lost track of William Robert somewher betweeb 1907 and 1911,
areas that william and emily lived in were Donald,Maryborough,Ballarat, all in Victoria.
I have just sighted his daughters marriage cert dated 24/5/1907 and it shows her father william as a millwright,so we are only looking for his death or disappeaance from 1907-1911

Don't know if I have already posted this information, other than I did update the link up above, but the Lawson Family Heritage Program has moved their website. New look, new URL but same great research. There will be some additional info to be posted in the near future. (Children of the next generation, headstones, etc...)

Hi    My grandmother was a Lawson. Her name was Jessie. b Matlock vic.

Comment by Sherry Hightower on February 1, 2010 at 12:29pm
Christine, I do not know of this lady but I will check to see what I can find. Can you give some details?

Comment by Christine Elaine Law on December 30, 2009 at 11:45pm
Hi, do you know of anything about Elizabeth Littleberry Lawson?