Permalink Reply by Nancy House Perry on August 22, 2009 at 1:52pm
1st Row: Evan Fain and his second wife, Mary D. Preston. Their children in the back, from left to right, are Gordon Fain, Arkie Diamond Fain and John Hamilton Fain (he went exclusively by his middle name, Hamilton). This photo was taken in 1900 at their home on what is now Elm Fork Road.
The Fain family came to Jessamine county from Virginia in the late 1700/early 1800 timeframe. Evan Fain, born 1824 and died 1902, was the son of Richard C. Fain and Mary Polly Cobb. Mary D. Preston Fain, born 1846 and died 1925, was the daughter of Richard Preston and Susan Switzer. Gordon Fain and Arkie Diamond Fain Grant left Kentucky around 1920 and moved to central Indiana. Hamilton Fain remained in Kentucky, living in Lexington until his death in 1941. 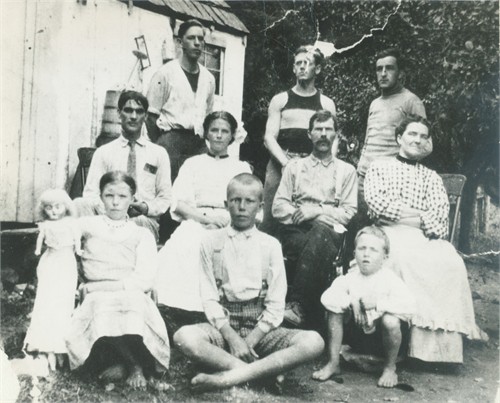 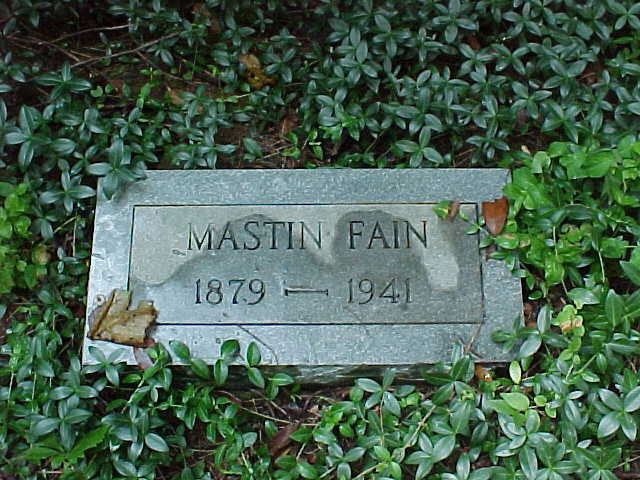 Permalink Reply by Nancy House Perry on August 22, 2009 at 1:19pm
Kentucky Artist Franklin D “Howard” Fain, 73, husband of Ruth Ann Rhorer Fain for 50 years, died Saturday, August 25, 2007 at the Hospice Care Center at St. Joseph Hospital after a short illness. He was the son of the late Clifford and Beulah Fain and a lifelong resident of Jessamine County. A graduate of Nicholasville High School in 1952, he attended the University of Kentucky majoring in art. Through further training with I.C.S. in Pennsylvania, he earned a diploma in commercial art. During his years at U.K. he worked for an engineering firm as well as an architectural firm. He later held, for seventeen years, the position of Vice-President and interior designer for Faulkner-Fain Corporation. At present and for the past 35 years he has been a full time artist and author. He was the founder and operator of Howard Fain Gallery from May 5, 1958 until May 1, 1997 and had worked from his home studio since retirement.

His work is found in all 50 states as well as several foreign countries. Some of his better known works are the Largemouth and the Smallmouth Bass prints that were distributed by the Bass Anglers Sportsman Society in Alabama. His Kentucky-American print was released for America's 200th Birthday, and can be found in many government offices. Drawings and stories from his book "Six Years Before Electricity" were published in 19 issues of the Country Extra magazine, based in Glendale, Wisconsin. The pictures and stories in this book are from real life experiences, as a farm boy, growing up without electricity.

He has typically shown with pen and brush many of his native Jessamine County's past scenes. Churches, schools, historic buildings and related subjects have become his favorite subjects. He has published over 400 pieces in limited edition and has done more than 700 private commissions for collectors over the United States.

Other than his wife, he is survived by a son, Jessamine County Circuit Clerk Howard Douglas “Doug” Fain and his wife, Amy Pritchett Fain and his 3 youngest grandchildren, Haleigh Cecilia Fain, Jonathan Pritchett Fain and Katherine Elizabeth “Katie Beth” Fain, all of Nicholasville. His other son, Cecil Allen Fain, a full time Lexington, KY Firefighter, was killed in the line of duty January 2, 1993 while serving with the Jessamine County Fire Department. Cecil and his wife Paula had one son, Howard's oldest grandchild, Kaihlab Allen Fain. He is also survived by a daughter– in-law, Paula Carson Fain Jasper and her husband Jeff and their children, Amanda , Madison and Morgan Jasper, all of Bryantsville, and his brother-in-law William T. “Bill” Davis, Nicholasville. In addition to his parents and son, he was preceded in death by his sister, Jean Allen Fain Davis and his in-laws, Cecil and Dixie West Rhorer.

He is a Charter member of Edgewood Baptist Church in Nicholasville, where he has served as Deacon, Trustee and Sunday School Teacher. He was active as a scout leader for several years. He served in the U.S. Army at Fort Knox, Kentucky Fort Jackson, South Carolina and Fort Chaffee, Arkansas with the 100th Division and attained the rank of Staff Sargent.

Permalink Reply by Nancy House Perry on August 22, 2009 at 1:31pm
Pearl Stinnett Fain, 96, formerly of Brown St. died Sat. July 18, at Northpoint Nursing Home. She was the widow of Virgil D. Fain who passed away in 1989. She was born April 24, 1913, in a house built by her father and grandfather near Pollard in a community then called Cobbtown. Her parents were the late Wilmert and Fannie Woodward Stinnett. She became a Christian at the age of 15. Her church membership is at the Nicholasville United Methodist Church. She was a 50 plus year member of the WMU, a Sunday school teacher and served many other roles in the church. She was a member of the Oak Hill Homemakers Club and had been a piano teacher. Music was a vital part of her life and she sang for church and funeral services, and taught music in the public schools and also privately in the 1950’s. After moving to town in 1959 she worked and retired from Central Baptist Hospital. Survivors include her daughter Janelle, a half sister Margie, a half brother Arnold, several cousins, nieces and nephews. She was preceded in death by 2 full brothers Stratton and Marvin and 2 half sisters Lorene and Emily. A special thanks to the staff at Northpoint Nursing Home and to her roommate, Helen.

Services will be 1:00 PM Wed., July22, at Hager & Cundiff Funeral Home. She will be laid to rest beside her husband at Maple Grove Cemetery. Family and friends will serve as pallbearers. Visitation will be from 4 to 8 PM on Tues., July 21, at the funeral home. 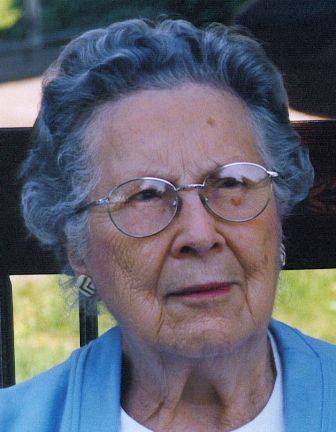 Permalink Reply by Nancy House Perry on August 22, 2009 at 3:17pm
Mattie Belle Fain, two year old daughter of Mr. and Mrs. Joe Fain, of near Keene, died of influenza and pneumonia Friday (November 2, 1918), and the body was buried in Pleasant Hill graveyard Saturday. The deceased, besides her parents, is survived by four brothers; Herbert, Arthur, Leonard and Joe Lee Fain; and four sisters, Nellie, Mary, Minnie and Elizabeth Fain.

Permalink Reply by Nancy House Perry on August 22, 2009 at 3:17pm
Mattie Flora Fain, 79, of Lexington, died Friday, June 7, in Lexington. Mrs. Fain was the daughter of the late Floyd and Mary Flora and the widow of Edgar Fain, who died in 1972. Survivors include a son, Donald W. Fain; a daughter, Cecie Fay Hugg; three sisters, Geneva Tutor, Dorothyn Buffin and Evelyn Hunphrey. She was preceded in death by a sister, Sue Ann Johnson and a brother Raymond Flora. Burial was in Maple Grove Cemetery.
Jessamine Journal, June 13, 2002

Permalink Reply by Nancy House Perry on August 22, 2009 at 3:17pm
Nathan Fain, aged 63 years, died at his home 349 South Mill Street, Lexington, Sunday morning, Mar. 8, 1914, of apoplexy. Mr. Fain was a native of Jessamine County and was twice married, his first wife being Miss Sallie Young, of Madison County. Three of their children survive; Norman, Ulmont, and Gordon Fain, of Lexington. Several years ago, Mr. Fain was married to Miss Kettie Richardson, of Rice Station, Estill County. Three sisters, Mrs. John Williams, of Valley View; Mrs. George Turpin, of High Bridge; Mrs. Lucy Mahin, of Canton, Oh. Mr. Fain was engaged in the general merchandise business in Estill County for a number of years, but moved to Lexington about ten years ago and has been in business there until a short time before he became ill. The remains were brought to the Pleasant Hill burying ground and interred in the family burying lot Tuesday.

Permalink Reply by Nancy House Perry on August 22, 2009 at 3:18pm
At her late home in the Little Hickman neighborhood, Mrs. Sarada Fain, widow of the late Larkin Fain, died Tuesday, (May 15, 1894) aged 70 years. The deceased was the mother of Mr. Fayette Brooks, Mrs. Green B. Sageser, Squire Wilson Fain and Dr. Tilford Fain, of Kirksville. Mr. William Fain, of Wilmore, is also a son of the deceased. The funeral services were conducted at the residence by Rev. F. W. Noland yesterday; interment took place in the Fain family burying ground near the old Potts Mill.

Permalink Reply by Nancy House Perry on August 22, 2009 at 3:18pm
Squire Wilson Fain died suddenly, Thursday, Jan. 6, 1910, at his home near Little Hickman. He was apparently well at breakfast, but later complained of a pain about the region of the heart. He had been subject to acute attacks of indigestion. His son, Will Fain, was in the room and as he went out, his father fell forward into the fireplace and, hearing his daughter scream, Will Fain hastened into the family room, to his father's relief. He was only slightly burned about the face and expired in a few minutes. He was sixty-four years of age, and was born near where he had spent his life. He leaves a wife, who was Miss Mary E. Vanpelt and three sons and two daughters, Wm. Fain, Mrs. Wm. Collier, Indianapolis, Ind., Mrs. Richard Robards, Lexington; Alvin Fain, Hanley, Harry Fain, Plymouth, Ind., all of whom were notified by wire yesterday. For a number of years, deceased was a member of the Jessamine Fiscal Court and he was serving his second term as County Superintendent of Roads. He leaves two brothers, Mitchell Fain, a farmer near Little Hickman and Wm. Fain of Garrard County. Deceased was a leading and influential citizen and Democrat; a man of general information and high character, respected and honored by all our citizens; a member of the Mt. Zion Methodist church. He made a good official, both as Magistrate and Turnpike Superintendent and the news of his sudden taking was received with expressions of regret. The interment will be in Maple Grove Cemetery, Nicholasville, Saturday afternoon.