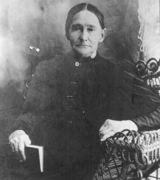 For descendants of Johanne and Susanna (Reiss) Ebenstein of Kleineuhausen, Germany.

Notes on the Ebenstein family

I have been researching this family for almost 50 years, as Ebenstein was my maiden name.

This family is the only one with this surname that is NOT Jewish. As far back as the mid-1700's they were Evangelical or Lutheran.

Johanne came to the US in 1851 with his daughter Maria. His wife, Susanna, came in early 1852 with their son, Charles/Karl's family. Charles' wife, Hannah (pictured in the group photo) was pregnant with twins and gave birth on the voyage. My great-grandfather August was not quite 2 when they left Germany.

They first settled just north of Marion, OH, where they apparently rented at least one farm and saved their money. Both Johanne and Charles were weavers, but I have no evidence that they ever touched a loom after arriving here. Their next move was to Darke Co., OH, where Johanne and Susanna both died. Charles became a citizen there and the family then moved to New Corner, IN, just north of Muncie. He served in the Union Army during the Civil War. They lost children there, and August married Hannah Brock. Their remaining children also married. August moved to Mecosta Co., MI and Charles and Hannah packed up and moved to Baxter Springs, KS. The rest of the family followed them - except for August.

My web site is not complete, but take a look at it and see what I have. I am constantly adding to it. If you connect with this family, please join us and let's share what we have.

You need to be a member of Ebenstein surname to add comments!