NY - OH - MI :: What Branch of the Cousins family are you researching? Please open a new Discussion for your Branch. 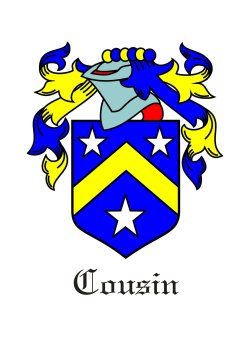 Cousins Family Websites
http://www.cousinsfamily.co.uk/start.htm
Cousin
English and French: nickname from Middle English, Old French co(u)sin, cusin (Latin consobrinus), which in the Middle Ages, as in Shakespearean English, had the general meaning ‘relative’, ‘kinsman’. The surname would thus have denoted a person related in some way to a prominent figure in the neighborhood. In some cases it may also have been a nickname for someone who used the term ‘cousin’ frequently as a familiar term of address. The old slang word cozen ‘cheat’, perhaps derives from the medieval confidence trickster’s use of the word cousin as a term of address to invoke a spurious familiarity. The patronymics constitute the most frequent forms of this name.
Dictionary of American Family Names, Oxford University Press, ISBN 0-19-508137-4
Cousins
English: patronymic from the nickname Cousin.
Dictionary of American Family Names, Oxford University Press, ISBN 0-19-508137-4
Cozzens English: variant spelling of Cozens.
Dictionary of American Family Names, Oxford University Press, ISBN 0-19-508137-4

The names Cousins, Cussans and Cussen in Ireland are of Norman origin having been brought to the country during the twelfth century. Families bearing this name formed the Cuisin Sept along native Gaelic lines and became fully integrated into Irish society. Counties Limerick, Wexford and Cork were the main setlement areas.