For those who have an interest in the symbols found in cemeteries. Come ask questions or assist others.

You need to be a member of Cemetery Symbols to add comments!

All information is good, even if its heard a second or third time. From what I have been told, our line comes from the Hylton Castle line. But again, this is not my research so I would have to double check everything. Which, you have given me good cause to pick that line up and see what I can find. If you are on facebook, I am on there regularly you can find me at www.facebook.com/tracingmyfamily

Hope you have a great day!

The first Hilton/Hultons were recorded in the 1160s and the Hilton/Hyltons showed up a bit earlier than that. The family in the East believe that they came from Viking stock and my lot in the West were most likely from Wales; although where we came from before we got to wales is anyone's guess.

The Lancashire family is much bigger than the Durham lot; all the censuses indicate that the vast majority of Hiltons originally started in the NW. Lancashire, in the second half of the 19th Century, was a fertile recruiting area for the Church of the LDS and quite a few Hiltons went to the US as converts to that religion.

The Hiltons in the NE mainly relate to a family that lived in Hylton Castle (near Sunderland) whereas my lot in the NW all lived in or around 3 villages called, Little Hulton, Middle Hulton, or Over Hulton. The main line of the family owned a lot of property and had an extremely large house and a lot of coal mines and other interests. Sadly I am a younger son of a long line of younger sons in a country that firmly believed in the principal of "primo genitor"; (but as the French say - c'est la vie).

I get the slight impression, having seen other (mainly US) websites, that most Hiltons in the US think they must be related to Edward or William Hilton who founded N Hampshire; in reality it is quite unlikely and they are more likely to be lucky enough to have stemmed from the steady Lancastrian stock!

Anyway enough for now and sorry if I have told you things that you already knew.

Thanks for replying so quickly! To be honest, I do not get on here often enough. When I saw that someone posted to this group I created I thought it best to check it out before I forget.

I find it interesting that in England the spelling of Hilton/Hylton can be Hulton. That is not one I have come across yet. Though the majority of the Hilton Research has been by a cousin of mine.

I am always glad to connect with more family, maybe one day we will find the connection. Right now, I am looking into DNA testing for other lines and should add this line to it. Unfortunately, I would have to look to family in WV to see if I can find a male that is willing to take the test.

If you find the guy from DiVinci Code, let me know. There are many mysteries that need to be solved.

Gosh that was a quick reply!

I've posted this question because I noticed that you have an interest in Hilton/Hylton family genealogy; this grave is by Deane Church near Bolton in Lancashire.

I am a Hilton and I'm fairly certain that James was a relative of mine; the problem is that there were so many Hiltons in the area that they are difficult to differentiate; particularly as they weren't very imaginative when it came to choosing Christian names.

The E symbol has been deliberately carved into the stone and doesn't seem to relate to either of the occupants of the grave - they were John and James Hilton.

In those days the family used either Hilton or Hulton as the mood took them; the earliest spelling is Hilton and then over the years the "clerks or scribes" used their own interpretation of how to write the name down.

I wondered if there was any religious symbolism in the letter E - perhaps as an abbreviation; maybe we need the guy out of the Da Vinci code to help us!

Sorry, Exile. I have no clue, but hopefully someone else will chime in and help.

Guys, this grave was placed in position in 1608 and I wonder if anyone has an idea what the E shaped symbol at the top of the stone represents. 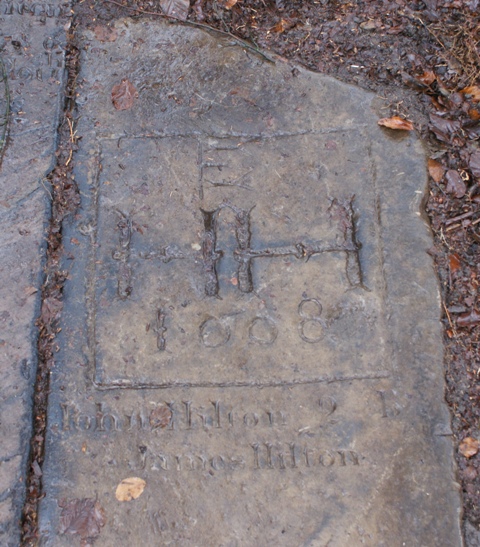 Comment by Terri O'Connell on March 28, 2010 at 3:07pm
Everyone has been a bit quite in recent months. Lets see those pictures of symbols that you still do not know what they mean. Or feel free to start a new discussion above in the "discussion forum"!

Comment by Michael Stills on September 12, 2009 at 10:42pm
Dr. Chauncey Sheldon, moved to Warsaw, NY in 1808. He was a physician and started a Drugs and Medical store and was know as a "professor of religion." He was Presbyterian.

Comment by Unknown Ancestor on September 12, 2009 at 10:22pm
MS: what's the locality and likely religion?
The sun is probably about resurrection, the triangle can be the Trinity, and 6-point-star can be good and evil, or natural man/spiritual man.

Comment by Lacuna on September 12, 2009 at 10:14pm
Also, an upside down triangle is sometimes used to signify a male - the broad shoulders and narrow waist. Based on the name, this would work.