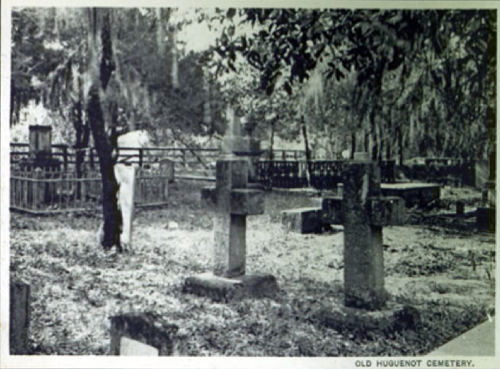 INSCRIPTIONS IN THE OLD PROTESTANT GRAVEYARD AT ST. AUGUSTINE, FLORIDA. Vol. XLVII (1893), Page 300 Communicated by B. Frank Leeds, Esq.
Row 17. John Drysdale, who died 24 May 1845, aged 62 years. Ann Drysdale, daur of John and Lois H. Drysdale, born on the 22nd of June 1823; died at St. Augustine, 14 January 1844. Forty lines of inscription, the last words of which are "beloved friend and pastor, Rev. Joseph H. Rutledge, of Trinity Church of St. Augustine." Thomas W. Drysdale, who departd this life at St. Augustine, 11th day of October, 1841,in the 17th year of his age.
Lewis Drysdale, died Dec. 2, 1857, aet. 27. Perhaps other persons buried in western part of lot. A horizontal slab considerabley moved. This grave is in the western part of the Drysdale lot, the wall of which is in a ruinous condition.

Huguenot Cemetery - Wikipedia, the free encyclopedia
en.wikipedia.org
The Huguenot Cemetery in St. Augustine, Florida located across from the historic City Gate was a Protestant burial ground between the years 1821 and 1884. The Spanish colonial city of St. Augustine, along with the entire Florida Territory became defacto American possessions after the 1819 signing of...http://www.scribd.com/.../Huguenot-Cemetery-Inventory-1892

The first Huguenots to leave France seeking freedom from persecution went to Switzerland and to the Netherlands.[citation needed] A group of Huguenots was part of the French colonisers who arrived in Brazil in 1555. Two ships with around 500 people arrived at the Guanabara Bay, Rio de Janeiro today, and settled in a small island. A fort, named Fort Coligny, was built to protect them from attack from the Portuguese troups and Brazilian natives. The settlement was an attempt to establish a French colony in South America. The fort was destroyed in 1560 by the Portuguese who captured part of the Huguenots. The Catholic Portuguese threatend the prisoners with death penalty if they did not convert to Catholicism. The Huguenots of Guanabara, as they are now known, produced a declaration of faith to express their beliefs to the Portuguese. This was their death sentence. This document, the Guanabara Confession of Faith, became the first Protestant confession of faith in the whole of the Americas..[citation needed]
A group of Huguenots under the leadership of Jean Ribault in 1562 ended up establishing the small colony of Fort Caroline in 1564, on the banks of the St. Johns River, in what is today Jacksonville, Florida.
The colony was the first attempt at any permanent European settlement in the present-day continental United States, but the group survived only a short time. In September 1565, an attack against the new Spanish colony at St. Augustine backfired, and the Spanish wiped out the Fort Caroline garrison  North America

Main article: The Huguenot Society of America
Barred from settling in New France, many Huguenots nevertheless moved to North America, settling instead in the Dutch colony of New Netherland (later incorporated into New York and New Jersey), as well as the Thirteen Colonies of Great Britain and Nova Scotia. A number of New Amsterdam's families were of Huguenot origin, often having emigrated to the Netherlands in the previous century. The Huguenot congregation was formally established in 1628 as L'Église française à la Nouvelle-Amsterdam. This parish continues today as L'Eglise du Saint-Esprit, part of the Episcopal (Anglican) communion still welcoming Francophone New Yorkers from all over the world. Services are still conducted in French for a Francophone parish community, and members of the Huguenot Society of America.Huguenot immigrants founded New Paltz, New York, which has the oldest street in the current United States of America with the original stone houses, and New Rochelle, New York (named after La Rochelle in France). Louis DuBois, son of Chretien DuBois, was one of the original Huguenot settlers in this area.[33] There was Huguenot settlement on the south shore of Staten Island, New York in 1692. The present-day neighborhood of Huguenot was named those early settlers.
Some Huguenot immigrants settled in Central Pennsylvania. There, they assimilated with the predominately Pennsylvania German settlers.
Some of the settlers chose the Virginia Colony (John Broache is one on record), and formed communities in present-day Chesterfield County and at the falls of the James River. They settled at what is called Manakintown, an abandoned Monacan village now located in Powhatan County about 20 miles (32 km) west of downtown Richmond, Virginia, where some descendants continue to reside. On May 12, 1705, the Virginia General Assembly passed an act to naturalize the 148 Huguenots resident at Manakintown.[34]
The Huguenot Memorial Bridge across the James River and Huguenot Road was named in their honor, as were many local features, including several schools, including Huguenot High School.