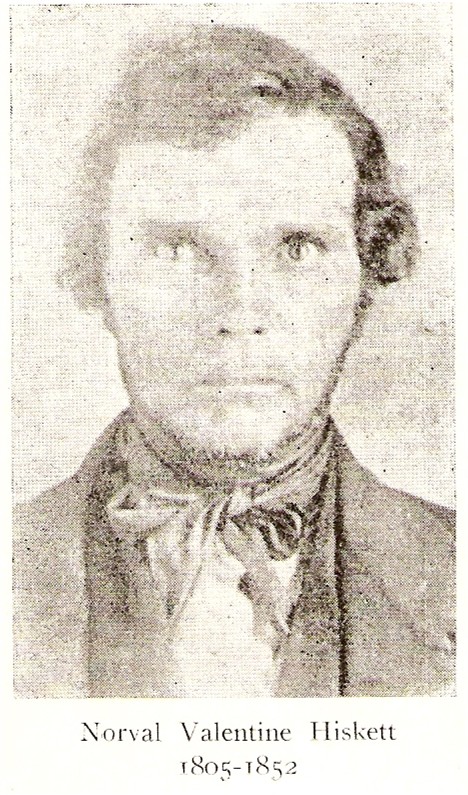 Norval Valentine Heskett/ Hiskett is my 4th Great Grandfather and his early life is a total mystery.The only information I have about his early years is from a family history written by my great grandfather in 1947, and of course he didn't cite his sources, so I have no clue how accurate the facts are. The information from ggrandpa states that Norval was born 15 Feb 1805 in Loudoun county, VA, to Benjamin Adam Heskett/ Hiskett. There is no mention of his mother. Norval's gravestone located in the Old Presbyterian Cemetery in Mt Gilead, Morrow county, OH, supports the birthdate. Norval was supposedly raised by his grandparents in VA, although whether it was his maternal or paternal grandparents was not stated.

That was all the information I started out with. Who was Norval's mother? Why wasn't he raised by his parents?

Most of the Heskett researchers that I have found say that Nancy Nevin was the mother of Norval. Nancy was born in 1792, only 13 years before Norval's birth. Benjamin Adam and Nancy were married 23 Jan 1812 in Ross county, OH, 7 years after Norval's birth. I got a copy of Norval's paternal grandfather's will from Loudoun county, VA. I wrote to Belmont county, OH and got a copy of Benjamin Adam's will. Although I had my fingers crossed, there was no mention of Norval in either will, although Benjamin Adam's children by Nancy were all mentioned.I wrote to see if there was a previous marriage record in Loudoun county for Benjamin , with no luck. I wrote letter after letter, each one with a negative response.

On 12 Feb 1829 Norval married Massey Nickols in Marion county, OH. They had 7 children and then on 19 April 1844 Massey died. Norval then went to Loudoun county VA in 1846 and married Emily Howell. They returned to Marion county where they had 4 children, only 2 survivng infancy. Norval died 8 Feb 1852 in Mt Gilead, Morrow county, OH.

The more I research, the more questions I have. Who is his mother? Can I even be sure that Benjamin Adam was his father? Where was Norval from birth until 1829 when he married? I search the records, bang my head against the brickwall , and still have no answers, only questions. And over and over I ask, WHERE'S NORVAL???

Someone please pass me the Tylenol.

Comment by Dawn Evans Stringer on July 16, 2009 at 3:49pm
You know as often as I have looked at all my information, it had never "clicked" that Norval appears when his grandfather dies. Hmmmm this gives me more to think about. I also misspoke when I said I had received the will of Benjamin Hiskett Sr. He had no will, but I have his inventory and accounts. Still no mention of Norval though.

Comment by Dawn Evans Stringer on July 16, 2009 at 1:54pm
Here is a transcription of the will of Benjamin Adam Heskett. I have kept the spelling and punctuation as it was written.
Will book H pages pgs 328-330
Belmont county, Ohio

Will of Benjamin A Hiskett decd

I Benjamin A Hiskett of the township of Goshen in the County of Belmont & state of Ohio, do make and declare this my last will and testament as follows to wit:

second
That all my just debts be fully paid

sixth
It is my will that at the death of my wife Nancy (or if she should die prior to my children being of lawful age, then at that time) my said farm be divided among my children as follows. to wit: in six equal divisions from North to South, by line running N to S without regard to quality, and to my daughter Phreba C the Eastern division, to my daughter Harriet the next division adjoining, to my daughter Sarah Jane the third division & next in order from the E line to my son Everett I the fourth division from said E line, to my son David N the fifth division from the E line & to my Son Hamilton R the sixth & W division which divisions are to be made and come into the possession of my said children at the time specified

seventh
I will that my oldest daughter Phereba C have the use of the Eastern from said time during her life & at her decease, to be divided equally between her children now living Emily and Louisa and to the survivor of them

eighth
I will that at the death of my wife Nancy if any personal property should remain unconsumed, the same shall be divided equally among my living children

Benjamin A (his mark) Hiskett