I was recently asked by another genealogy addict..."Out of all your ancestors, who would you want to be like and why?"

As soon as I heard the question, my mind was racing. No, I haven't found anyone incredibly famous along the lines of my family tree that I wish my genes were traced from. But these ancestors that I've found...oh the stories they could tell of their own lives.

There's my 9th great-grandfather, William Hulbert. I can't imagine being a young man of only nearly 18 years of age, and traveling across the ocean to start a new life in the colonies which were barely even started. But I hope that any amount of bravery I have I can credit to him.

William's great-great grandson, Moses Hulbert - who my lil' princess swears we must be related to Jesus Himself just because we have an ancestor named Moses. He was the first to venture out away from the New England colonies, and traveled across New York state, and his son, Lester, who I can give credit to my Ohio roots.

My favorite ancestor has to be a woman though. And traced far back enough, these women were strong, enduring, and famous or not, their lives were a testimony in their own right. My 7th great-grandmother, Mary (Gauslin) Hulbert - her life was also in Northampton, Massachusetts. What I love reading and re-reading is a short record found about her from 1749, where she was refused admittance (or membership) into the local church there.

Here's the interesting little tidbit - at that time, the local church was under the leadership of Reverend Jonathan Edwards. The same Rev. Edwards who was responsible for the wide-spread revivals we know as the Great Awakening. I have yet to dig deeper into this, but it would appear that perhaps my grandmother was refused membership into the church by Jonathan Edwards himself! I shake my head and laugh at this.

Although Edwards is known for the revival atmosphere, what's not usually spoke of is what happened after the fact - the Rev. Edwards had begun the practice of closed communion, where only members of his church were allowed to participate. Eventually this was part of what led to his leaving / being removed from that church. As best as I can understand, Mary requested her admittance into the church, but would not sign the church covenant stating Edwards' strict beliefs for church membership, thus denying her membership??

I know many of you are thinking that there is nothing wrong with having a covenant belief in our church. We need order! We need rules! We need - what?...legalism? Faith based on works? I know faith without works is dead, but give me a faith in spite of those works anyday. A faith that my great-grandmother had even after she was refused membership into her church. That's a personal faith and belief in her God, one that I am proud to have as her descendant. 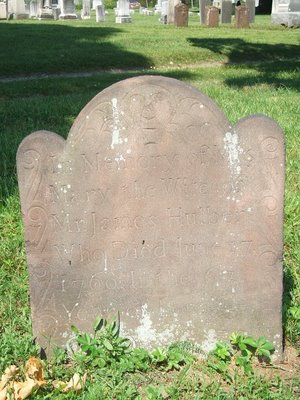 (Mary Hulbert's stone in the Bridge Street Cemetery in Northampton reads, "In Memory of Mrs. Mary the wife of James Hulbert who died June 17, 1760, in the 63 year of her age")