I'm taking the writing course in September, and one of the first things we're asked to do is talk about our writing experience. That reminded me about this story from 17 Oct 1992 that I wrote for the Prince Albert Daily Herald. It was three weeks into my first job after graduating from journalism school. Apparently, I hadn't yet learned the difference between "that" and "which." Oh, and I took the photo, too. 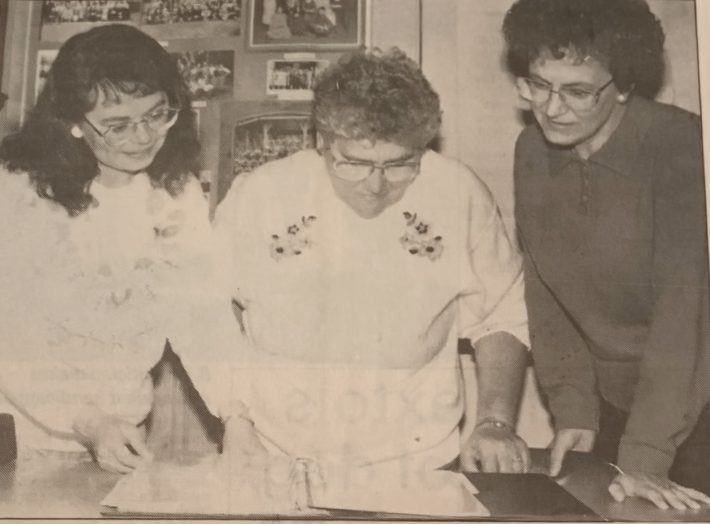 Audrey Boyko says people who want to research their family histories have to be good at keeping secrets.

She has traced her family tree back to 17th century Czechoslovakia.

In the process, Boyko says she has found many skeletons in the family closet.

"I can't say what they are," she says with a laugh.

Boyko, however, has written down the stories and says no one will see her secret files until she's dead.

Whatever mysteries remain lurking in the Boyko past are obviously not disturbing enough to prevent her from digging further.

As president of Prince Albert branch of Saskatchewan Genealogical Society, she is helping others peer into the murky closets of their families' pasts.

"We show people it can be done. You can find your ancestors."

The branch, one of the 23 which make up the provincial society, held its annual meeting Tuesday to elect executive.

The branch meets once a month at the Historical Museum, 10 River Street east.

Though Boyko says the branch promotes the research and discovery of local history, the location is a coincidence.

"It's the only convenient place we could meet.”

Boyko says the branch holds seminars to help beginners start to trace their roots. She says her best advice to beginners is to ask older relatives about the past.

The branch also has a cemetery committee which visits graveyards and collects information from tombstones.

The committee checks this information against church and municipal records.

The branch runs a tiny research library for members’ use. All  Branch members are able to use the provincial society's library in Regina.

These libraries can help people track down copies of birth and marriage certificates, documents Gladys Christensen says reveal a lot about family history.

She located some documents which show some of the dates in the family Bible had been fudged to cover up the fact that two of her ancestors "had to get married."

Christensen has also found a copy of a divorce record from the 1860s in which the husband complained that his wife "was sluttish about the housework”.

She joined the branch three years ago.

"You always have questions and you don't know who to ask,” she said.

"So belonging to the group is a good way to find things out."