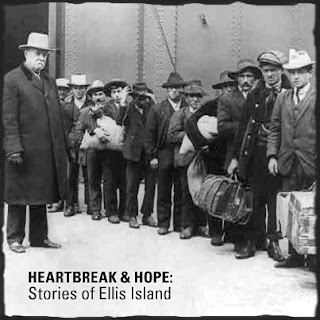 New York, NY – In honor of the reopening of Ellis Island on Monday, October 28, 2013, Statue Cruises is pleased to announce the launch of a new blog to tell the stories of the immigrants who came to the United States through Ellis Island.

Anyone with an Ellis Island story is welcome to submit their story through the blog for publication. The blog will also feature those stories of the employees of Statue Cruises, and its parent company Hornblower Cruises.

Reopening almost exactly one year after Hurricane Sandy devastated the East Coast, Ellis Island’s reopening is a symbol of the recovery effort. The goal of this new project is to bring attention to the valuable resources offered by the Ellis Island Foundation, and their mission, in partnership with the National Park Service, to preserve and share immigration history. The Ellis Island Foundation estimates that it will cost them $2 million to replace and install the destroyed computer equipment that runs the American Family Immigration History Center at the museum.

Statue Cruises, the official concessioner to the National Park Service, is the premier harbor cruise operator in New York Harbor, sharing the sights of New York with almost 4.0 million annual visitors from around the world. For more information visit: http://www.statuecruises.com/press.aspx. It is a subsidiary of Hornblower Cruises, which has been the leading charter yacht and public dining cruise company in California for over 32 years. The company operates 32 vessels in San Francisco, Berkeley, Sacramento, Long Beach, Newport Beach, Marina del Rey and San Diego, and an office in New York City.

About The Statue of Liberty-Ellis Island Foundation, Inc.

The Statue of Liberty-Ellis Island Foundation, Inc. is a non-profit organization founded in 1982 to raise funds for and oversee the historic restorations of the Statue of Liberty and Ellis Island, working in partnership with the National Park Service/U.S. Department of the Interior. Its endowment has funded over 200 projects at the islands.

Ellis Island was the former federal immigration processing station which processed over 12 million immigrants between 1892 and 1954. A 1965 presidential proclamation added the island to the National Park Service as part of Statue of Liberty National Monument. After years of neglect, major restoration work on the Main Building took place in the 1980s, opening as the Ellis Island Immigration Museum in 1990. The National Park Service works with its partner organizations, The Statue of Liberty – Ellis Island Foundation and Save Ellis Island, to improve and enhance operations at the park.