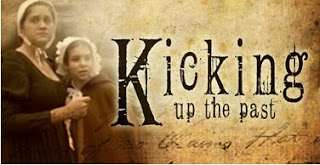 Speaking Saturday before a well-attended meeting of CAGGNI (Computer Assisted Genealogy Group of Northern Illinois) Kicking Up the Past project producer Ken J. Marks said, “this is the only documentary you will find on television that portrays the hard-work, art and science of researching your family tree… no celebrities… no button-pushing short cuts”.

Just 7 days remain to the novel project conceived by Chicago-area teacher & genealogist, Madonna Davis to utilize crowd funding to fund a television documentary project called Kicking Up the Past. The effort relies strictly on the strength of the public to make pledges to support the expense of producing a made-for-television documentary preserving family histories. Co-producer Madonna notes, “If just one half of 1% of everyone who pursues genealogy in the U.S. pledges just a few dollars, it would fund a full season of great television that the whole genealogy community could fully endorse.”

The deadline for pledging is this Sunday, November 24th. Simply go towww.kickstarter.com and type “genealogy” in the search bar to find the Kicking Up the Past project.The project rewards may also be viewed at http://goo.gl/n8f2f5.

Kickstarter is a funding home for everything from films, games, and music to art, design, and technology. Kickstarter is full of projects, big and small, that are brought to life through the direct support of the public. Since its launch in 2009, 5 million people have pledged $822 million, funding 49,000 creative projects.

Those interested in this history-making project can visit:http://www.KickingUpthePast.com for details on the project, launch and campaign updates, preview reward levels, and access additional information on how to participate in this history making event.