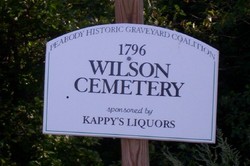 
Robert Wilson served in the Revolutionary War as a private in Captain Samuel Epe’s Company, under Colonel Pickering’s regiment of Danvers. He marched on the alarm of April 19, 1775 to Lexington for a service of two days. He was a potter of some renown, being from a family of potters who produced an unusual black glaze. He died fairly young (aged 50), and his wife, Sarah (Felton) Wilson, isn’t buried with him, but across the street at the Felton Family plot. She died in 1836, surviving him by about forty years, but never remarrying.


The attempt to find the Wilson Family Cemetery was not easy. I was told to park at Kappy’s Liquor Store to find it, but I didn’t know that I would have to park BEHIND the story, near the dumptsters, where there was a very steep drop covered with weeds. The Peabody Historical Society has placed a very nice sign here, but it isn’t visible from the road. Neither is the cemetery visible from the road. Only after climbing down the steep embankment can you see the stone wall and the gravestones. Down there, in the deep chasm behind Kappy’s and the embankments of Rt. 128, you can see nothing but trees and gravestones. It is how it must have appeared before modern times, and before backhoes changed the landscape.


The Wilson Homestead stood near 141 Andover Street (Rt. 114), and it no longer exists. Actually, the street is just a conglomeration of strip malls, chain restaurants, stores and parking lots. Nothing older than about 1950 seems to exist.


The first potting Wilsons were Robert, Jr. and his brother Joseph, who went to Dedham (also famous for its pottery) and to Providence, Rhode Island. Robert Wilson 3rd and his brother Job were potters, too. Robert 3rd served as administrator to his father’s will in 1793, when two- thirds of the Wilson land and the potting business was sold to Isaac Wilson 3rd, another brother. The three Wilsons ran the business together, but both Robert and Job died before 1800. Isaac died in 1809 and the Wilson black glazed pottery business ended.


I imagine that the black glazed pottery must have contained lead or some other poison, to kill all the Wilsons so early, but the death records at the time do not list a cause. I’m descended of Robert’s son, another Robert Wilson, who died in 1803 at the very young age of 27! Again, the records, and the gravestones give no cause of death, so I’m free to let my imagination run wild.


In the next generation, Mercy Wilson, born in 1803 just a few months before her father’s death, lived to the ripe age of 80, dying in 1883. Phew! It couldn’t have been something genetic killing the Wilsons, it must have been the pottery! At least that is my theory… and I’m sticking to it!


And so, I photographed all the Wilsons in the quiet little cemetery in the gully in Peabody. Quiet because the trees, embankments and steep inclines muffled the traffic of routes 114 and 128, even though a large cloverleaf interchange was located just yards away. All those generations of Robert Wilsons were found, recorded and digitally saved.
However, one more Wilson mystery remains. Across the street, behind the North Shore Mall, lies the grave of Jonathan Wilson, undisturbed by the back door of Macy’s. He has another historical marker located near his grave, and the flag carefully placed there by the local DAR chapter, because this Jonathan Wilson was also a veteran of the Revolution. I haven’t been able to place him among the branches of the Wilson Family Tree, but I’m working on it!