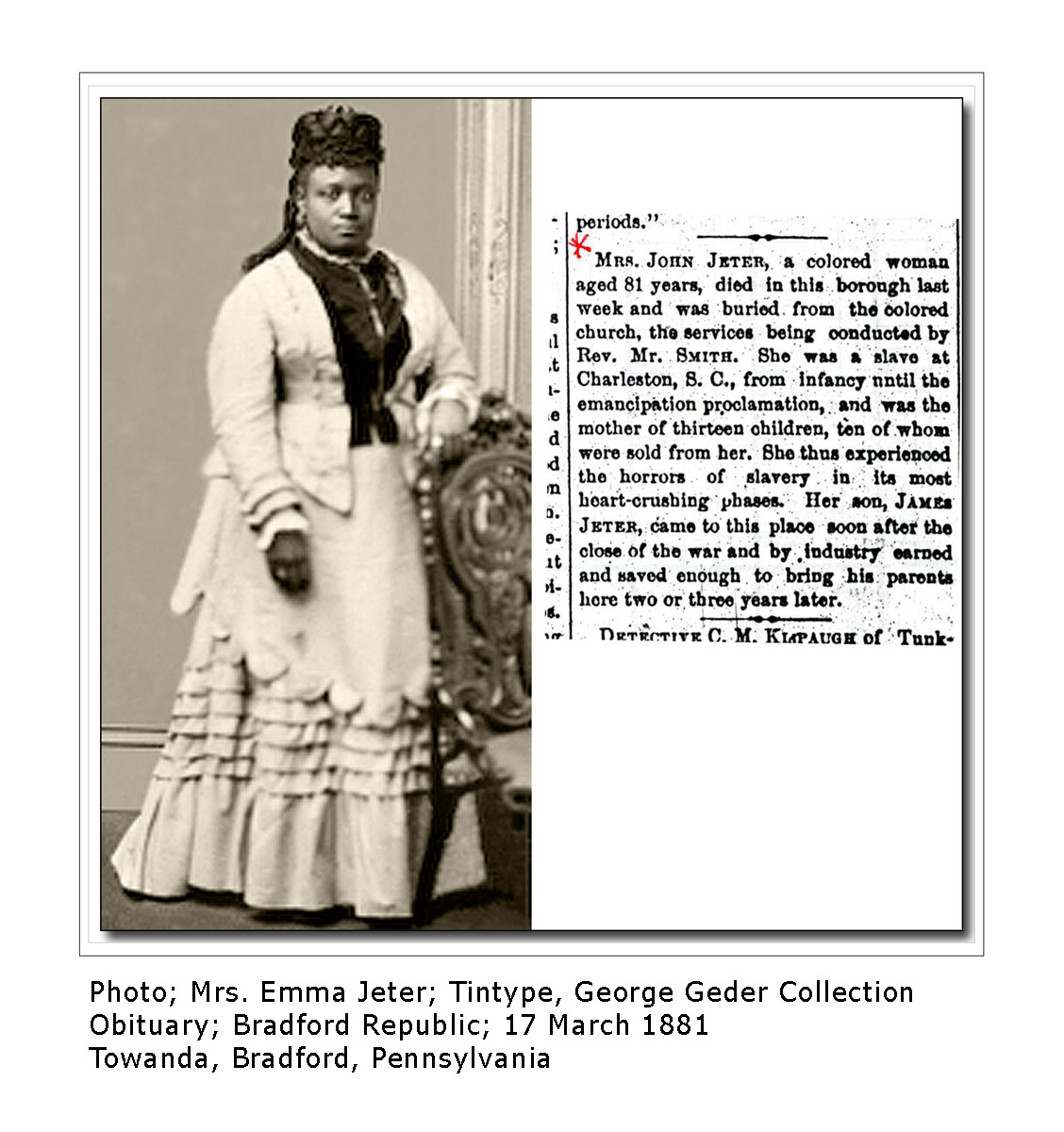 This is my 2nd Great Grandmother.
I'm blessed to have inherited this Tintype from my Dad.
Also, I'm thankful to the Bradford County Historical Society of Pennsylvania for sending me the obituary a number of years ago. It reads:

-Mrs. John (Emma)Jeter, a colored woman aged 81 years, died in this borough last week and was buried from the colored church, the service being conducted by Rev. Mr. Smith.

She was a slave at Charleston, SC, from infancy until the emancipation proclamation, and was mother of thirteen children, ten of whom were sold from her.
She thus experienced the horrors of slavery in its most heart-crushing phases.
Her son James Jeter, came to this place soon after the close of the war and by industry earned and saved enough to bring his parents here two or three years later.

I need help; as you'll also see in subsequent posts.
I'll be calling upon those GenealogyWise folks who live in Pennsylvania to help me. (Friend requests coming up shortly! LOL)

My Jeters came to Towanda from Virginia. I just don't know where in VA. Jeters are in practically all of the counties and mine are named James, John & Jeremiah.

Wills, deeds, and court records are what I need help with.
Can anyone assist?

Comment by Toni Carrier on July 19, 2009 at 4:14pm
Yes, the Emma Jeter in the WPA narrative is clearly not your Emaline. And you have potentially conflicting information from obituaries. Puzzling. Sure wish you knew who the informant was for her obituary. ---toni

Years ago, when I first learned about the existence of Emaline, I immediately went to the Slave Narratives.
I found 'Emma Jeter', but couldn't connect her to my Emaline. They're both in the 1870 census in different locations. When you get to the 1870 census, you find a zillion Jeters and Geters throughout the South. With names like Emma, James, John and Jeremiah you can see right away the challenge.

The only record I have of Emaline in South Carolina is that which is in her obituary.

Comment by Toni Carrier on July 19, 2009 at 12:18am
Well I'm shocked to find a record, we have been trying to grow our database for six years now to build a robust data set but I searched and found an Emma Jeter, she may or may not make sense for this research question:

Not sure what it's worth or if it fits the research question. --toni

Comment by Toni Carrier on July 19, 2009 at 12:07am
So her son James was free when he migrated to PA. Looking right now through labor contracts for Charleston an surrounding. ---toni

The first was the mention of the “colored church” where her burial services were conducted.

The second was the identification of the minister who officiated at her funeral as the “Rev. Mr. Smith.”

I’m always curious about the relationships our ancestors had with others within their community and what we may be able to learn about their lives by examining the lives of the folks they knew and interacted with.

In this case, what do you know about the “colored church” where Emma Jeter’s funeral was held and the clergyman who conducted the service?

Yes, it appears so!

In the History of the Towandas 1770-1886 by Clement F. Heverly, Towanda, PA Reporter-Journal Publishing Company, 1886 there is a brief sketch of the African M.E. Church of Towanda on Pgs 189-191. In that sketch we learn that William SMITH was secured as pastor sometime between 1869 and 1870 and that “In 1871 the church joined the Zion conference at Philadelphia” henceforth known as the “African M.E. Zion Church of Towanda.” The sketch further tells us, “The church edifice is a wooden building, 30x40 feet, with basement, and stands on State Street between Second and Third. The building was begun at the suggestion of John Carter, who was one of the first and most liberal subscribers.”

Could Pastor William Smith, cited in the above history, be the same “Rev. Mr. Smith” who officiated at Emma Jeter’s funeral in 1881? It’s seems very likely. So, what does the 1880 census reveal, if anything, about a minister named William Smith residing in Towanda or in Bradford County, PA?

The only record I could locate in the 1880 Census for a black male named William Smith residing in Bradford County, PA was the following:

In Asylum Township, Bradford County, PA, enumerated in the household of a white farmer named Benjamin Mingos, age 49, was a black man named William Smith, age 42, who stated he and his parents were born in Virginia. His occupation was not listed as preacher or minister, but “laborer.” His relationship to the head of household was recorded as “servant.”

Emma Jeter’s obituary stated that your JETER family came to Towanda via Virginia at about the same time period that William Smith was installed as pastor of the African M.E. Church of Towanda.

It begs the question: If Rev. William Smith was born in Virginia -- could there be a Virginia connection between the SMITH and JETER families?

Also of great interest is the bio in the same "History of the Towandas" for John CARTER, the man credited with being the “first class leader” at the African M.E. Church. According to the remarkable sketch on pg 301, John Carter was born into slavery, also in Virginia, and escaped a slave coffle bound for Georgia. He eventually settled in Towanda, PA in 1837.

Hmmm…there seems to be a preponderance of former Virginia slave families who belonged to the African M. E. Zion Church in Towanda. Since your family appears to have belonged to that church for a long period of time, have you inquired about any church records which many shed further light on the JETER/GEDER family history?

Knowing the sleuth that you are, I’m sure you’ve already considered or examined most of this information George, but I couldn’t help thinking out loud. All good wishes to you my friend as you continue your search!

P.S. Now, what about those EUBANKS and DUNBARS from South Carolina?! ; -)

Comment by Katrina Haney on July 14, 2009 at 1:31am
This just breaks my heart. I simply cannot imagine how horrible it was for people to have their children ripped from them and sold like they were they were just another possession, with no thought or concern about the feelings of the people involved. I've never been able to wrap my head around this. But how you must cherish this photo and obituary. So many people did not have anything recorded about them like this. Thanks for sharing.