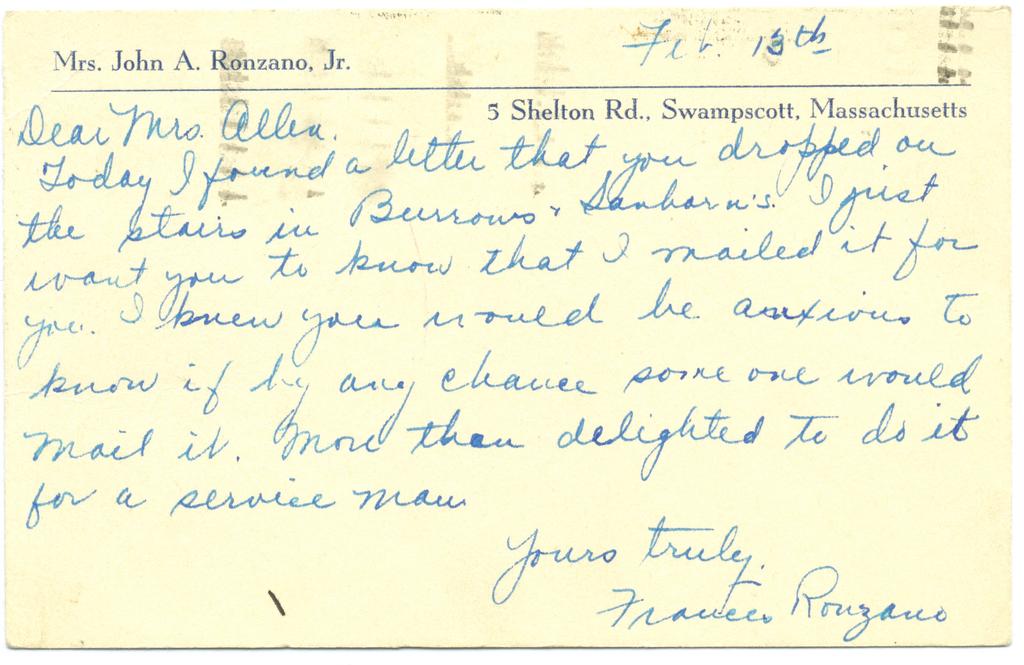 Sometime in February 1945 my grandmother was shopping at Burrows and Sanborn, a department store in Lynn, Massachusetts. She dropped a letter to her son, my uncle, who was serving as an airman in Guam during World War II. A woman from Swampscott, Frances Ronzano, found the letter in the stairway and mailed it. Then this kind woman dropped a postcard in the mail to Nana, and let her know that her letter was on its way to her son.

The stationary is labeled, Mrs. John A. Ronzano, Jr. at 5 Shelton Road, Swampscott, Massachusetts. I couldn’t find a reference to anyone named Ronzano of Swampscott on Google.com except for a reference to a “Ronzano Family Memorial Scholarship” under awards given at Swampscott High School.

I found references on the internet, through Google, of the Burrows & Sanborn store in Lynn. I even found a reference to Charles Sidney Sanborn, son of John Sidney Sanborn and Frances Alexander, on page 71 of “The Register” a book of memoirs by the Lynn Historical Soceity published in 1931. He went to work for a dry goods firm in 1872, known as Homan & Burrows, which later became the retail store Burrows & Sanborn.

My uncle, Stanley Elmer Allen, Jr., served with the Army Air Corps in the South Pacific. He was part of the 21st Bomber Command as a tail gunner on a B-29 named “Orpen’s Orphans”, named for Colonel Bud Orpen. His unit was involved with the final bombing of Japan and Tokyo at the end of World War II. These final bombings started in February 1945 (at the same time my Nana wrote her letter) and ran through the summer until the B-29s hit the arsenal complex on August 10, 1945. He died at the Maine Veteran’s Home in South Paris, Maine on 14 July 2003. I never did find out if he got his letter from his mother.