What is a FamilySearch Center?

The very recent additions to the Beta FamilySearch.org website prominently features a search link to "FamilySearch Centers." Here is a screen shot showing the link:… 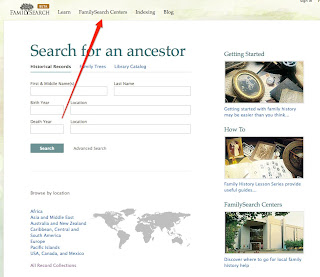 How do I know what's new in the genealogy world today?

There are a number of programs called aggregators. These aggregator
programs do all the work for you of going out onto the Internet and
gathering any changes in posts to websites and blogs. Google Reader and
other similar programs are also known as feed aggregators. They may also
be referred to as feed readers, news readers, or rss readers. (RSS
stands for really simple syndication). Aggregators reduce the effort
needed to check a number of blogs or websites for… Continue

Isn't genealogy supposed to be fun?

Fun is a serious topic. I would hesitate to even do a Google search on
fun with anything else, there would be so many responses. If our society
was judged by our advertisements, fun would be judged to be one of our
most sought after goals. Here are some of the titles of the hits found
by a search on "fun genealogy." (6,470,000 results)

Indications are that FamilySearch must be getting closer to releasing the new version of their FamilySearch.org
website. This last week or so, a banner appeared on the original site
inviting users to try the new beta version. There is also an invitation
on the FamilyHistory Library startup page to try the beta version of the
Family History Library Catalog which is incorporated in the beta site.

The beta site for… Continue

Connecting the Research to the Genealogist