There is only one day left

"There is only one day left, always starting over: It is given to us at dawn and taken away from us at dusk."- Jean-Paul Satre

What was the song that the character played by Bill Murray woke up to everyday in Groundhog Day?

It was a great surprise when I discovered just how far back teaching goes in my family especially through my Moody ancestors.
My mother (Ozie Mae Moody Hunt aka Koko) was proud that all three of her children went to college, graduated, and became teachers. Her goal, spoken to us time after time, was that we would go to college “one way or another.” I don’t know if she wished all to be teachers, but she always spoke highly of her cousins who were teachers. After both of my children also… Continue

When I first decided to start researching my family history in earnest, I was totally under the belief that I wouldn't get very far. My paternal grandparents were immigrants from Sicily, so I didn;t expect to get much on that side.

The only hope I had was on my mother's side. I knew my grandmother was born in 1895 in Colorado. I am still kicking myself for not realizing the significance of this and asking her questions before I lost her. Nevertheless, I set out to see what I could… Continue

"A Buck's head, decorated with flowers, fixed to a pole" (Marriage in the Newspapers from 1786)

Broadly I find two catagories of marriage entries in newspapers -
The normal Mr.X son of Y married Miss Z daughter of .... at .... on so and so date.

And then we have the more uplifting one's. For example this came from one of my recent transcriptions of the Salisbury and Winchester Journal, 1786.

"A few days since was married at Compton, near Shaftesbury, John Jeanes, aged 83, to Elizabeth Fisher, alias Rideout, alias Thrifty, a brisk young widow of 25. They were… Continue

Spelling, my thoughts on the subject

Thought I would mention this as I have found some instances where folks say the spelling of surnames and place names are not correct and can't be their ancestor. But when you go back in time and folk learnt to write they all wrote the words phonetically, i, e, o and y can all be transposed. Gibbins, Gibbons, Gybbons, Gebbens. etc. So keep an open mind and think about the local dialect, the speaker may have a cold, or a lisp!! In old wills and documents you will often find the same name with a… Continue

I am trying to find Kate Pink youngest daughter of Benjamin Pink and Agnes Williams she was born 1867 at 9 King Street, Camden Town, England. After Agnes died, Benjamin came to Australia with his two oldest children leaving Kate with her maternal grandparents Thomas and Mary (Martin) Williams in Herdford. I have traced her to the 1891 census but since then have not been able to find her. I have bought 3 marriage certificates for Kate Pink that thought were going to be the ring ones but of… Continue

I guess I just needed to post my vent in order to find my missing Mathieu. He was born July 4 1807 to the parents I suspected him with. I am just so happy ya'll don't know!

Searching and not finding

I have looked through all the Drouins for St Ours for the 1810 time frame and have not come across any Michel Mathieu. I did find a Michel Mathieu born in 1810 in Yamaska which is 30 miles from St Ours and one born in 1805 in St Ours. I am hoping to obtain a copy of his death certificate soon so that I can see it for myself to verify dates and who gave the information.

When I'm searching the internet for people or even just background information on the area they were in, I look for genealogical societies and historical societies at the state, county and individual town level to see if they have a website available. Often these smaller, more local groups will have great collections of written information and if you're really lucky, photographs as well. New to this site

I'm glad I found this site. I was wishing for a site like this. Now I can talk to other people who are researching their family trees.

New to this place.

Well since I'm new I figured I better say something.
Been doing genealogy for abt 5 yrs now. Oneof the most rewarding things I've ever done.
Mooney is my main line of research but have more.

Dick Eastman (who's blog I try to read every day) has highlighted an interesting article by Gena Philibert Ortega on the subject of tracing female ancestors - the content is US based newspapers and I thought it worth contrasting this with earlier newspapers.

Newspapers are a brilliant resource for family and local historians - but you do need to mindful that early newspapers had a number of objectives, they were commercial enterprises, which in practical terms means they needed to… Continue

Hi all I would like to know if anyone know of the SAVIEL family in India and Burma.

The SAVIEL family has been in INDIA for many years and Origiated from Europe in the 18th and 19th century.

My SAVIEL family descended from GEORGE THOMAS SAVIEL who was born in 1827 India and married first to SOPHIA MARY MORLEY in CALCUTTA INDIA in 1853.
HE later went to work for the Public Works Department in BURMA in 1861.
In 1873 he married ROSE HNIN SI in Thonze,BURMA and… Continue

My Haley/Healy/Healey Line of Descent

Have set up a website with information relating to the 1790 Census: Slave Holders, Other Free Persons and Slaves.

I joined GW on the first day - don't know what number I was, probably six hundred-and-something. One thing that attracted me was the ability to connect with others who are researching the same surnames as me, in an environment where all had the same interests - genealogy, family history and the like. I watched for hours and days as the membership grew and grew and grew.

Every day I search the member list for my surnames that are a bit less common, but I didn't know how uncommon they… Continue

The article “Where’s Rose” that appears @ www.missingheirfinders.com under the testimonials tab: case study appeared in the February issue of PI Magazine and won first place in the National Association of Legal Investigator’s Editor and Publisher Awards given at their annual conference held this year at Nashville, TN This open case remains on my desk and we try every new digital source that comes online. I have placed her particulars on my profile page. Someday we will find her. 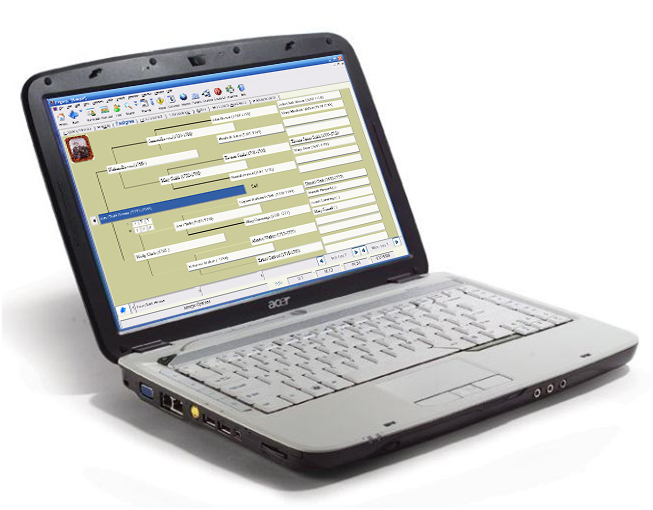 Here's a little extra incentive to stop by the Legacy Family Tree booth at the BYU conference next week (begins Tuesday, July 28 in Provo, Utah). We're giving away a free Acer Netbook PC.

You do not have to register for the conference to be eligible to win the computer. But you do have to turn in the entry form (it's a crossword puzzle) to the Legacy booth by 4:00pm on Thursday and be present for the drawing.… Continue

"No MAN Shall Build a Meeting House at Chebacco (now Essex, Massachusetts)"

I love this story. "Just regular folks" in the family tree. Thomas Varney was born about 1630 in the Barbados and removed to Massachusetts to settle at the Chebacco section of the town of Ipswich before 1650. His first wife was Abigail Proctor, who was also just a "regular folk" except that her brother John was hung as a witch in 1692. Perhaps being a bit different from all the other puritans in town ran in the family.