For over ten years, I have written regular columns about my research experience, first for Ancestry and most recently for Dick Eastman. Starting this week, my weekly "how-to" column "Casefile Clues" will be available exclusively through subscription through my website http://www.casefileclues.com/. I am very excited about the move. Our first issue will be sent out the first weekend of August.

Looking for Featherstone Information worldwide, willing to share some 12 years of collecting information.
Founder member of the Featherstone Society a one name study group for Fe(a)therston((e)haugh) You can join via http://www.featherstone-society.com My main genealogical activity in the last couple of weeks has been chasing up our Sandercock - Saundercock families. I've just blogged about the earliest ancestors, William Sandercock and Mary Verran, with a picture of their tombstone in Cardinham churchyard in Cornwall, England, over on our main family history blog.

Today marked a very important day. Armed with the knowledge there was a reference to my great-grandfather, Dan Kelly, in J. Sterling Morton's 1905 Illustrated History of Nebraska, I took off for the local library (just one block from my workplace), found the book, opened it to the biographical section and right before my eyes saw the name of William D. Kelly who was married to Mary Casey. These were Dan's parents.

Today I did a search on Grooms family in S.C. and Grooms Family in America.I found a lot of imformation that needs sorting through.Maybe I will find family connections to Chesterfield County , S.C. Alligator Province prior to 1850.I have a Grooms family there in 1820,1830 and 1840, but not sure which family is mine.

Come see us at the BYU Family History Conference this week (Tuesday July 28th – Friday July 31st). Visit our booth, attend our classes, or take away one of our $1,000 worth of prizes! You don’t even have to be registered for the conference to attend the class or be eligible for the prizes.

Looking For Relatives Of Margarie Farren

I recently Order a Birth Certificate from NARA Looking for Winifred Farren Of which they did not have but what i did
get was a Birth Certificate Of Margarie Farren Who was born the same year my Grandmother was born .
Margarie Farren Was Born March 4 1894 Her Parents are Mary McElkinney and James Farren . He Has the same exact name as my Great Grandfather But not the same person.
I want to E-mail or Mail it to the rightful owner in this case Her Relatives Please contact me… Continue

A massive family reunion will descend on Sandy, Utah, Aug. 28 and 29. All relatives – dead and alive – are invited to the 2009 Salt Lake City, Utah Family History Expo! This event is an opportunity for everyone to connect with the past, present and future through family history research. 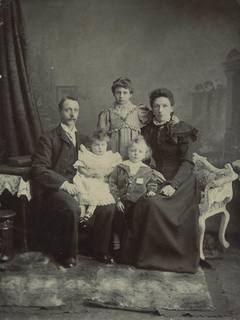 Although I have many ancestors who came from England on the Mayflower or with the Winthrop Fleet, I also have some ancestors who came to Massachusetts via Ellis Island in 1915. My grandmother, Bertha Louise Roberts, was just nineteen years old at the time, and she traveled from Leeds, Yorkshire with her parents and her older brother, Horace. My great –grandparents were John Peter Bowden Roberts and his wife, Emma Frances Warren. John Roberts had a job… Continue

I am looking for lost siblings that were adopted about 30 years ago. Their names at the time were kevin john conrad, terry joe conrad and joyce ann conrad. now they go by the name parker. they lived in colarado at the time of adopttion. joyce was born oct 31, 1971.

cannot find any trace of my great uncle Richard Taylor born in Bolton, Lancs, England and emigrated to either New Zealand or Australia in ? early 1900's. siblings were George, John William, Elizabeth? and Emma?.
Any leads much appreciated John Taylor

I start a Egbert Surname list. I know that I'm not the only person research the Egbert name, sometime I feel like I'm. My Egbert came from Staten Island, New York to Ohio to Iowa. But where were they before Staten Island ? Maybe someone can help.

Alice COGSWELL (1805-1830) was the inspiration to Thomas Hopkins Gallaudet for the creation of the now American School for the Deaf in Hartford, Connecticut.

At the age of two years, she become ill with 'spotted fever' (cerebra-spinal meningitis). This illness took her hearing and later she lost her speech as well. She was met, at age 9, by Gallaudet, who seized the opportunity to teach the deaf girl. He and Alice's father, Doctor Mason Cogswell, decided that a formal school… Continue

I posted my weekly Best of the Genea-Blogs post for July 19-25, 2009 on the Genea-Musings blog. See the blog post here.

This is my opinion of the "best" - if you think you have written a great post that I'vem issed, please let me know!

My gggrandparents Henry and Margeat Shank Knupp came from Bavaria, Germany. 1870 U.S. census shows them in Monroe county, Ohio. They were were born approx. 1835-1836.
If someone can find anything about them before coming to U.S. let me know.

My ggrandparents came to United States in 1884 from the port Havre. They were from Germany, Their names were Ambrose and Tekla Rebholz, They had a baby with them, Karl and a daughter Zazilia?
Tekla's parents were John and Mary Ann Rapp Goetz. This was noted on Tekla's death certificate.
This is all I know about them.
On the U.S. 1920 census it notes that Carl (Karl) was born in Wurttemberg, Germany.
If anyone can find birth records for him in Germany please let me know..