John ADAMS Jr (1735-1826) was an American politician. He was elected second President of the United States (1797–1801) after serving as America's first Vice President (1789–1797) for two terms. He is regarded as one of the most influential Founding Fathers of the United… Continue

Considering much of my genealogy contains ancestors who were beyond "way back", and even earlier ones that folk suspect were ancestors but elude that vital connection, there is a missing link in my tree that is ridiculous.
I cannot find my great-grandmother.
I know her name, and thanks to my grandmother, I know her birth date, date of death and when she married my great-grandfather. I know she was born in New Jersey. That's it.
Her name was Kathryn Conway. The spelling of her… Continue

I happened to notice this Slate headline: Gates and Crowley Share DNA - So What?

Had a discussion over lunch with a friend about it. I touched on three things that the article brought to mind.

The first thing I thought when I read the article was: are you kidding? I've spent hours adding up to YEARS researching my family, and… Continue

As I mentioned in response to "Too Many Groups," most of my greatest progress in research has come as a result of focusing on location more than surnames in general. This approach has helped me make connections that I really am sure I couldn't have made otherwise. It has also enriched my appreciation for different communities in the United States and Canada, and what makes them unique. I've learned more about their geographies, histories, cultures, etc. It has made genealogy more meaningful to… Continue

Know When to Walk Away...

All genealogists ultimately hit the proverbial brick wall. We just can't seem to find a birth date for our great great grandfather that would help us distinguish him from another individual with his same name. We research for hours through microfilm hoping to find the piece of the puzzle that will suddenly flood our family tree with new branches. As genealogists we strive to not just get past the proverbial brick wall, but to tear it down. Not brick by brick, but all at once with one piece of… Continue Sometimes after fiddling with new technology, I am reminded of a story about my grandmother Hunt (Anne “Annie” Elizabeth Fears “Mamaw” Hunt). I have a new cell phone which not only lets me make and receive phone calls but send and receive text messages (a la my computer but a bit slower). And, if my way bigger than the buttons fingers happen to accidentally strike a certain key, I am logged on and can surf the web. (I think. I haven’t done anything yet but panic and turn off the phone.) Mamaw… Continue

In the news yesterday is a story about a couple who are engaged and planning to wed soon. What makes this story really unusual is that they have the same name, Kelly Hildebrandt, and they met on Facebook.

One night (female) Kelly was bored and typed her name into Facebook to see what came up. Up popped Kelly Hildebrandt but it was a guy and he was in Lubbock Texas. She sent him a note that said “Hi, We had the same name. Thought it was cool.” He “thought she was pretty cute” and on… Continue

Michael Oliver Jenkins is my 3rd great grandfather. I have been searching for his family for more than four years. As in the case of my gg grandfather William Woolsey, it's as though his life also does not start until he married. I often expect to encounter this hurdle with my female ancestors, but I seem to be encountering this with my male ancestors quit often. So in order to break down this brick wall, I sat down and wrote out his Biographical Outline as I know… Continue

I can't find where my gg grandfather's family is in those two censuses.I know they didnt move away.I will keep looking today.Also I have been sorting out the Grooms' that I am related to in Chesterfield County.

I was able to obtain a copy of the original application which my grandmother filled out when applying for Social Security. As I expected, It confirmed which date was accepted by the SS administration, but was of little other value. Did it contain the truth? That was what I needed to know. And if it was a lie, when was the lie first told? This brings me to another document that was supplied by one of my aunts. Apparently, what was found in the old bible was a letter that my grandmother herself… Continue

talkingroots: Rolling out of the car

Lots of things make me uncomfortable. These include driving on freeways with cars and big, big trucks tailgating then whizzing by me and/or blocking me in and going over tall bridges like the one over the harbor at Corpus Christi or the high rise freeways of Dallas and Houston. I don’t ride roller coasters or tilta-a-whirls. As a child I remember feeling nauseous playing in the playground merry-go-round (whatever those round push with you foot and then jump on things were called).
In later… Continue

Although there is still some controversy, many genealogists now subscribe to the belief that my great-great-great grandfather, Nathaniel (Miguel Luis) Pryor (c. 1800-1850) was, indeed, the son of Nathaniel Pryor, a well-documented member of the famed expedition of William Clark and Meriwether Lewis, the first American overland expedition to the Pacific coast and back (1803-1806).

There have been numerous books written about the expedition, of course, and also one written specifically… Continue 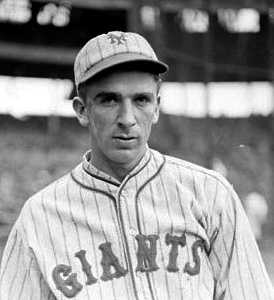 Carl Owen HUBBELL (22 June 1903 - 21 November 1988) was a left-handed screwball pitcher in Major League Baseball who played with the New York Giants in the National League from 1928 to 1943. In the 1934 All-Star game played at the Polo Grounds, Hubbell set a record by striking out in succession five batters destined for Cooperstown: Babe Ruth, Lou Gehrig, Jimmie Foxx, Al Simmons and Joe Cronin. Married (1) 1930 to Lucille HARRINGTON… Continue

I was researching some archived list messages, gleening bits and pieces of old information when I came across this posting. It is suppose to be an actual ad, a recruiting article for Census Takers in 1869, Bexar Co., TX

The original poster failed to include the link or source so please just read it for the humor and not the "god's honest truth". If this is a real newspaper or handbill notice, it's a wonder any one has a surname spelled correctly. ;-)