>> The archivist, David S. Ferriero, can
>> be reached by email at
>> research@nara.gov.

WorldCat.org is a major international connection to over 10,000
libraries worldwide and catalogs over 1.5 billion items. Google Books
contains over 10,000,000 digitized books and magazines. WorldCat.org
and Google Books are now interlinked. If you search for a book on
Google Books and find the item, one of the options is to find the item
in a library. Clicking on this option gives you a link to… Continue

I'd greatly appreciate it, and it will help put ShoeString in the top ten, thus enabling more people to visit and…

An
article in Mormon Times, opens the door for almost the first time,
to a main stream airing of some of the most glaring problems with New FamilySearch.
Although the article is low key, it points out some of more difficult
issues with the program. If you have been following the development of
the program at all, you will… Continue

I am the great-great-grandaughter of James Golding and Maria Humphris. They married in 1849. He was a house painter. They had I think 8 surviving children - Maria, Elizabeth, James (my grandfather) Jane, William, Emily, Sarah and Anne. James employed his 3 sons, James, William and Edwin as housepainters, until James immigrated to Australia in 1883. They lived variously in Charlton Kings, Guiting Power, and Bouron-on-the-water. In the 1870s they settled more permanently in Regent St Cheltenham.… Continue

Faces of America and GenealogyBank comments

Today we were able to watch a segment on Faces of America. The hope to encourage people to learn more about whom they are and whom in their back ground helped to make them whom they are.

It was great with the diversity of the people interviewed and researched, to learn that there was even an interconnect between two of them. No I will not tell the whom's.

Then in the blog GenealogyBank.com by Thomas Kemp there was a great start of how to start your Genealogy. It was labeled… Continue

The Underground Railroad was neither Underground, nor was it a Railroad. It was in essence a series of conductors, safe houses, trails along rivers, secret routes, sometimes walking, and other times hiding in wagons. Before Europeans arrived, North and South America was comprised of thousands of Native American Tribes. Native Cultures date back at least ten thousand years, having traveled over the Bering Strait into North…

Researching genealogy at the Library of Congress

I have been working on preparing a presentation I am giving on March 2 at the Abundant Living Conference at Camp Allen. The conference spans 3 days and is billed as “Explore aging as a spiritual journey-grow mentally, socially and creatively. Come, relax, enjoy… celebrate the years!” The setting is a beautiful one, deep in the Piney Woods. I have never been to Camp Allen. In fact, it’s been many years since I’ve been to any ‘camp’ at all so I’m looking… 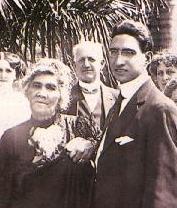 Additional thoughts on the revolutionary challenge of New FamilySearch

New FamilySearch
(NFS) is
much more than a simple database of names, it is a revolutionary way of
presenting genealogical information that has far reaching and even
revolutionary consequences to the way family information is stored,
displayed and maintained. One aspect of the program (if you can call it
that) is the extensive help system.… Continue