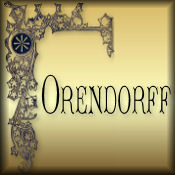 Please add your queries/info to the "Discussion Forum" in the group section so the RSS reader will picke them up.

You need to be a member of Orendorff to add comments!

I have created a cemetery for the Orenduffs  buried in Kentucky. Working with the Kentucky Historical society, I hope to have pictures up soon.

If it doesn't come up - there are two Orenduff cemeteries on Find-a-grave. Since I could not get responses from contributors for the one south of Melissa Texas, I posted my results from research on

A work of fiction that has several "Von Ohrendorf''s" as characters. I do not
know if she has any family connection, but it I would imagine it unlikely that she just happened upon the name.

It can be read online at Google books:

Comment by J Orendorff on May 22, 2011 at 3:45pm
Some FYI info on Hof Ohrndorf and coat of arms issues. I recieved the following info from the Westphalian Heraldry Society:

The "Manor" Ohrndorff was a so called Koenigs-Gut (King's Estate). Such Gueter (manors) were free from taxes etc.! In early times Germany had no capital and the King/Emperor and his court always was on journey through his realms. To maintain and support the court shattered over Germany were so callled Koenigs-Gueter. There the court could have a break or a longer rest.
Administrators of the Gueter were Lord-Stewarts often called "Graf" as Gograf (modern German "Gaugraf")!
In the 16th century Koenigs-Gut became less important and were sold to the administrators or to other noble families. By the way if there would be a family arms it must show the Imperial Eagle. Imperial places always were displaying a kind of an eagle.

This info corresponds to the reference, noted by others, in "Some ancestors of George Miess/Juliana Baldt and Philip Miess/Louisa Ohrendorf" - Clifford R Canfield (Author) that Simon was a courtier (?) of Orndorf. Per Wiki:
http://en.wikipedia.org/wiki/Courtier

"A courtier is a person who is often in attendance at the court of a king or other royal personage. [1] Historically the court was the centre of government as well as the residence of the monarch, and social and political life were often completely mixed together. Monarchs very often expected the more important nobles to spend much of the year in attendance on them at court. Courtiers were not all noble, as they included clergy, soldiers, clerks, secretaries, and agents and middlemen of all sorts with regular business at court. Promotion to important positions could be very rapid at court, and for the ambitious there was no better place to be. As social divisions became more rigid, a divide, barely present in Antiquity or the Middle Ages, opened between menial servants and other classes at court, although Alexandre Bontemps, the head valet de chambre of Louis XIV was a late example of a "menial" who managed to establish his family in the nobility. The key commodities for a courtier were access and information, and a large court operated at many levels - many successful careers at court involved no direct contact with the monarch himself."

My speculation-guess is that the resident family and or other workers at "Hof Ohrndorf" (Ohrendorff etc) were "stewards/stuarts" charged with farming and operating the property for the Holy Roman Emperor etc. who used the Koenigs Gut...Royal Estate.
As the herald noted, any Wappen / arms associated with the locale would have employed the double headed eagle. Eventually, the property was sold, gifted etc. to the people from the Hof "Ohrndorf/Ohrendorff even "Ahrendorf" etc. various spellings...and they adopted the surname(s).

As far as the name goes....in modern German it literally means "ear village" but my guess is that is not the original meaning....as in human ear. Since this area spoke low German it could be that the following options make more sense:

IF it was a Koenigs Gut...the symbol of the Holy Roman Empire was the double headed Eagle. My guess is that the name refers to either its status as a Koenigs Gut or there was an eagles nest....or grain growing farm.
Finding out for sure would be nice.