My Ancestor was a Preacher 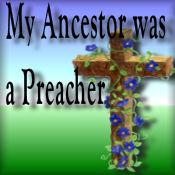 Preachers, Minister, Priest,etc. Anyone whose ancestor was spreading the word of God, often called Circuit Riders.

Notice: This group is in need of a moderator and if someone would like to take on that duty, I would really appreciate it! Not much to do really except answer questions, help with research if you can and just be available. Anyone interested, please email me at sherry.hightower@hotmail.com with "Group Moderator" as the subject. Thanks.

Just to let you know, if you will utilize the "Discussion Forum" below, the RSS reader will pick up the entries (for those of you who like to use the readers) and it will also help in keeping the replies with the original query or comment.

Appointments as listed under "Religious" in The Houston Daily Post, Nov 29, 1899

You need to be a member of My Ancestor was a Preacher to add comments!

Comment by Ron White on August 9, 2009 at 3:59pm
My wife's family branch comes down from Reverend Jacob Locke born in Hanover Co., Va. 24 Aug. 1767. He married Margaret P. Jett 09 March 1787 in Va. and had 9 children. Several of the boys were preachers as well. Reverend Jacob died 18 Jan 1845.
You can find his name mentioned many times in the Ky. history books. You can also find a very good bio. as to who the man was in my wife's other relative Cyrus Edwards book, Cyrus Edwards' Stories of Early Days. (written by his daughter Florence Edwards Gardiner).
I would say that anyone who has not read this book really ought to take the time out and do so. This book is a great way to see how the people lived and died. It's not just about names and dates but as to how they lived. Cyrus paints a great story through his writings.
As far as my side of the family, my grandmother was a preacher.

Comment by Carol Dobkins Keith on August 4, 2009 at 1:50pm
Sherry, is there anyway we can post the pictures of our preacher men with our comments? Or do they have to just go into an album. I think it would be so nice if we could see the person everyone is describing in their comments.

Comment by Barbara Cunningham on July 18, 2009 at 7:28pm
My great grandfather, Eudora Albion Smith, was a Methodist minister in Texas. I have heard that he was appointed president of Southwestern University in Georgetown but had a stroke and died shortly after accepting the post. However, I cannot confirm this story at all. Interestingly enough, his wife's grandfather, Thomas C. Lewis, was a minister in Louisiana. I used to joke that my father was a rebel from a long line of Methodist ministers, and then I found out that it wasn't far from the truth.

Comment by Doris McClenton Smith on July 16, 2009 at 9:46am
My ggrandfather was a circuit rider in Mississippi i hear he would go to the families houses and made sure everyone was out the house to go to church and if they were ill he would pray for them there but he tried to get the word out to everyone that he could about Jesus Christ

Comment by Michael Gallagher on July 16, 2009 at 9:40am
I thought I had a preacher ancestor with the surname Volck in NY, but I looked and could not find him again.

We don't know a whole lot about him. He and Maranza came to Texas in 1872/3 where they both died and their children were put with various families in the area.
What litte we know:
FROM THE BASTROP (TX) ADVERTISER
Abstracts published online at
http://searches.rootsweb.com/usgenweb/archives/tx/bastrop/newspaper...

09 October 1875
DIED - - - Edward D. SAXON on the 11th inst. He became entangled in the shaft at Mr. BARBEE's Steam Mill. Relatives unknown. SAXON has been living with W. H. COULSON, Sr. at Mcdade. SAXON said his parents settled in Fayette County [TX] 2 or 3 years ago, both dying in the same year they came to Texas. Said his father was a Baptist minister. There were many children, all scattered about after the parents' deaths. One is a sister of SAXON living with Mr. BASTIAN of Bastrop.

30 October 1875
N. THOMAS of Winchester, Fayette County, reports on the family of Edward D. SAXON who died recently. The Rev. Sanford SAXON, Baptist minister, came to this vicinity three years ago and settled on Maj. J. C. STRIBLING's farm in CUNNINGHAM's Prairie in Fayette County [TX]. This man and wife died the same year, leaving 8 children. The oldest, a girl of 17 or 18, married Sam SMITH who keeps "Jonis' Ferry" three miles from here. Robert, the eldest boy, is at the ferry. Paratina is with Major STRIBLING. Samuel is with Mr. Wesley HUNT in Williamson County. Margetta is with Mrs. COOK at Rutersville in this county. The little girl Emer is in your place [i.e., with Mr. BASTIAN of Bastrop]. The youngest is deceased. This family came from Florence, a small place in Alabama.

Comment by Heather Valdez Chambers on July 15, 2009 at 12:58pm
My husband's ggg grandfather was Kinsey S. Chambers. He was a Baptist preacher in Columbia County, FL. I found him on Find-a-grave and he has a footstone that says he is credited with being the first to share the gospel in Alligator Community. The cemetary he is buried in is named Chambers Cemetary and I have been trying to find out if it's named for him and his family, which I believe it is, but have no concrete proof yet.

Comment by Lynda McCann Ovington on July 15, 2009 at 10:22am
Researching the family of REV DAVID ELKIN(S) - Hardin and LaRue Counties, Kentucy
http://www.geocities.com/Heartland/Prairie/8066/preabios.htm#DElkin

·he was the first pastor at Otter Creek United Baptist Church which became Rolling Fork Baptist Church and at Little Mount Church
·and as a circuit rider, he preached the funeral of Nancy Hanks Lincoln, mother of Pres. Abraham Lincoln, in IN

Comment by Pat Salisbury on July 15, 2009 at 8:47am
My Husband's ggrandfather was a Baptist Circuit rider in Kentucky. His name was Rev William Salisbury.