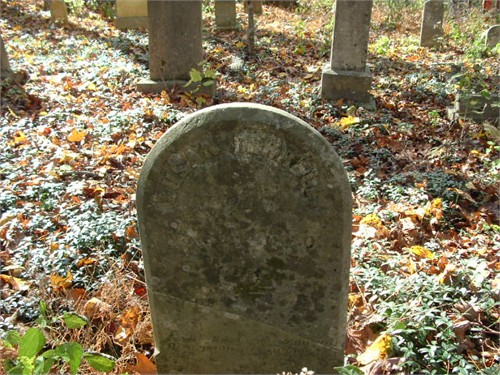 Aunt Edna was one of my dads sisters. My dad is late Carl Vernon Dean (married to late Geneva Hudson Dean. Harvey A and Elva Kemp Dean were my paternal grandparents. i never knew my grandfather. There were 10 children altogether. some are not mentioned here (i guess because they were already deceased. There was Mattie Ann Roberts(Patsy), Buanna Dean Roberts, Harrison Dean, Craig Dean, Floyd Dean. There was an uncle call "Woody" Dean. There was a sister i am told who passed away from leukemia when real young, can not remember her name.

Permalink Reply by Nancy House Perry on August 22, 2009 at 2:57pm
Funeral services will be held at 2:30 p.m. today (Friday) at the Mt. Beulah Methodist Church for Tom Blakeman, 82, retired Jessamine County farmer, who died Thursday morning (2-4-1954) at the home of a son, Buford Blakeman in the Pollard section, after a long illness. He was a native of Jessamine County, a son of the late Frank B. and Kitty Fain Blakeman. Besides his son, he is survived by another son, Smith Blakeman, Nicholasville; two daughters, Mrs. Hamlet Fain, Lexington; and Mrs. Henry Gullette, Wilmore; and one brother, Owen Cobb, Nicholasville. Rev. Elmer Ray and Rev. Thomas Murphy will officiate and burial will be in the Pleasant Hill Cemetery. Pallbearers will be Thomas Orbra, and Kenneth Gullette, Buford T. Blakeman, Howard Fain and Albert Hall. The body will remain at the Betts & West Funeral Home here until time for the funeral services.

Permalink Reply by Nancy House Perry on August 22, 2009 at 2:52pm
Charles Wylie, 90, husband of Margaret Lewis Wylie, died Saturday (March 28, 1998). A native of Jessamine County, he was a son of the late Robert and Nannie Blakeman Wylie, and a veteran of WW II. Besides his wife, survivors are a daughter, Mary Elizabeth Snellgrove and husband Robert, of Houston, Texas; a grandson, Matthew S. Snellgrove and wife Jennifer R. of New York City; and a granddaughter, Angela M. Snellgrove of Houston. Burial in Lexington Cemetery, Lexington, Ky. The Lexington Herald-Leader, Monday, March 30, 1998

Permalink Reply by Nancy House Perry on August 22, 2009 at 2:56pm
Owen Blakeman, 84, a retired employee of the University of Kentucky, died at his home on Cisco Road, in Lexington, Saturday, February 23, (1963) after a long illness. He was a native of Jessamine County, and a son of the late W. D. and Mary Blakeman. He was employed at the University of Kentucky for 27 years, and was a member of the Little Hickman Christian Church, in Jessamine County. He is survived by a daughter, Mrs. Jesse Steele, Lexington; four grandchildren and several great-grandchildren. Funeral services were held Tuesday afternoon at the Kerr Brothers Funeral Home by the Rev. Paul Gray. Burial was in the Maple Grove Cemetery, Nicholasville. 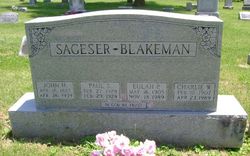 Charlie Blakeman 82, husband of Eula Pennington (Sageser) Blakeman died unexpected at Sunday, April 23, 1989 at Central Baptist Hospital in Lexington. He was the son of the late George Willard and Ella Sewell Blakeman. Mr. Blakeman was a famer and a member of the Nicholasville Christian Church. Other survivers include a brother, Carlos Blakeman, Jessamine County and a neiece and several nephews. Funeral services were conducted Wednesday April 26, 1989 at Guyn, Kurtz, Hager, and Cundiff Funera Home with Rev. Todd McCullen and Rev. W. J. Arvin officiating. Jessamine Journal 04/27/89 Eula Pennington Blakeman

Eulah Pennington Sageser Blakeman, 84, died Saturday, November 18, 1989 at St. Joseph's Hospital after an exteded illness. A native of Jessamine County, she was the widow of Charlie Blakeman and the daughter of the late George and Elizabeth Pennington. She was first married to and widowed by John H. Sageser. She is survived by a number of nieces and nephews. Funeral services were conducted at Guyn, Kurtz, Hager, and Cundiff Funeral Home with Rev. Todd McMullen officiating.

Permalink Reply by Nancy House Perry on August 23, 2009 at 9:58am
Frances Fain Blakeman 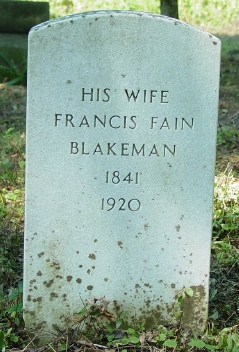