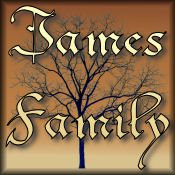 This group is for individuals interested in researching the James surname.

Whose line is it anyway? 3 Replies

You need to be a member of James Family to add comments!

Interested in informaion about Wiley B. James born 1824 in Davie Co. NC. He married Sarah Holder around 1842. I believe that his parents are Cornell James and Nancy Brickhouse but have no proof of that. Is anyone familiar with any of these families? Thanks in advance for any help!

my line is out of Arkansas, then Tenn. then North Carolina, then through Wales

She was mother of 16 - buried in Blanton Cemetery, Walker Col. Al. Would like more into on the James family.  Fran

Thank you, I have since been able to trace my line back to wales and even back to the orgin of my sur name.  Awesome Stuff, anyone in the james clan can email me personally, just put james in the subject line    my email is kemetic_priest@yahoo.com

Matt: North Carolina State Archives, Raleigh, has long published a very helpful book, I believe called the legal history of N.C. counties. For example, two counties are long defunct, Dobbs County and Glasgow County; the book should tell you to which each part of these counties went to in existing counties today.

I think Pitt County was formed from older Craven County, but perhaps 50 years later, a strip perhaps five or ten miles long and two to five miles deep, was taken from Craven and added to existing Pitt. Deep in the lowest Pitt Register of Deeds vault where the real old stuff like cattle branding marks, hogs ear notches, old slave mortgage books, etc., were kept, I met a lawyer who asked what I was doing in the really old stuff? I explained genealogy, and that my 1700's Wooten, Murphy, Roach, Forbes, Johnson families (and Blount, Roundtree kin) remained in Craven County after Pitt was formed until decades later it was added to now Pitt. The lawyer said that explained why he could not settle a farms boundary line dispute via historical research and instead had to settle it by contemporary mutual agreement. The two farms were within the Pitt-Craven strip I talked off, Still in Craven County. He only looked in Pitt.

My Millers, Halls, Pinkstons,  Sloans, Smiths, Lockes, Propsts, Barringers, Elliotts, et al, were in Rowan County, N.C., and if memory serves, Rowan was once a larger County.  If adjoining Davidson County (?) was later taken out of Old Rowan, you'd need to be checking in today's Davidson if they went from Davidson to Tenn., or where ever?  At one time Tenn. was part of N.C., and after the Revolution, N.C. gave many Tenn. land-grants to N.C. Revolutionary War soldiers. At one time the N.C. Secretary of State kept the old Tenn. land-grant records, but I think N.C. State Archives now has them?  Many of the chain-bearers for the surveyor were the sons of the purchaser, to save him money. Good luck! My Tenn. ancestors were 1815  Mobile, Alabama, 3rd U.S. Infantry, Col. Gilbert Christian Russell, Sr., born Abingdon, Virginia, and 2nd U.S. Infantry Captain at Fort Pickering below Memphis where he tried to save the life of his friend, Capt. Meriwether Lewis. His father, Maj. Andrew Russell, Sr. (wed Margaret Christian) fought at the Battle of Kings Mountain, N.C., and died somewhere in Tenn. I seek he and Margret's graves. I think her dad was Col. William Christian? Jim Miller, Southport, N.C.