Families 'Round the Cape

Families 'Round the Cape is for members (cousins!) who have ancestral roots in Plymouth and the Cape Cod area of Massachusetts.

In 1602 Bartholomew Gosnold named it Cape Cod, the surviving term and the ninth oldest English place-name in the U.S. Samuel de Champlain charted its sand-silted harbors in 1606 and Henry Hudson landed there in 1609. Captain John Smith noted it on his map of 1614 and at last the Pilgrims entered the "Cape Harbor" and – contrary to the popular myth of Plymouth Rock – made their first landing near present-day Provincetown on November 11, 1620. Nearby, in what is now Eastham, they had their first encounter with Native Americans.

Cape Cod was among the first places settled by the English in North America. Aside from Barnstable (1639), Sandwich (1637) and Yarmouth (1639), the Cape's fifteen towns developed slowly. It is in these fifteen towns on this small peninsula that many of the United States early colonial families settled, worked, and eventually (in some cases) spread out to other colonies.

Families 'Round the Cape invites you to share your genealogical findings, discuss topics of interest and history, and help us plot the trees of our common ancestors.

Hello,I am a descendant of Richard Warren (Mayflower)and Edward Bompasse (The Anne)I'm new to this group and mostly wanted to just check in.Say hello!   I'm always interested in discussing…Continue

Attached is what I have on the first 6 generations (male lines) of the descendants of Humphrey TURNER. Additions. corrections greatly appreciated. I am also interested in the other early TURNERs who…Continue

Descendants of the Reverend Stephen Bachiler who founded the town of Hampshire, New England

Much has been written about Rev. Stephen Bachiler.  He came to the colonies in about the year 1632 and is recognized as the founder of Hampton, New Hampshire.  Many of his descendants spell the name…Continue

You need to be a member of Families 'Round the Cape to add comments!

Comment by Spirit Baker on June 8, 2010 at 5:10am
Thanks for the huge history lesson William and I have more research to do. Too bad you are too far away to go to the Wing Family Reunion. Maybe next year you would like to go. Off I go to print my Doane Family book and research. Thanks

Comment by William S Dean on June 7, 2010 at 11:08pm
Plymouth Colony Militia, Being Resident Men Between the Ages of 16 and 60 Able to Bear Arms: Any of your Ancestors Here?

[SOURCE: Shurtleff, Nathaniel B., "List of Those Able to Bear Arms in the Colony of New Plymouth 1643," New England Historical and Genealogical Register 4, 1850]

Deacon. John Doane was born about 1590. He married Abigail Unknown.

He was one of the first seven settlers of Eastham and recorded there on 22 May 1655.

John Doane received a portion to keep and bring up Mary Brown until she was 17. On 10 Oct 1644, the term expired and he returned two cows and their offspring to John Brown of Duxbury.

Mr John Done is in the Plymouth section of the 1643 list of those between 16 and 60 able to bear arms in Plymouth Colony.

Children of John Doane. Their names are given in Hamlin

Abigail Doane was born on 29 Jan 1632. She died in 1734. She married Samuel Lothrop in 1690. Samuel was the son of Rev. John Lothrop.
"The following notice of the second Mrs. Lothrop is found in Miss Caulkins' history of Norwich: 'On her hundreth birthday a large audience assembled at her house, and a sermon was preached by the pastor of the church. At this time she retained in a great degree the intelligence and vivacity of her earlier years. At the time of her decease the descendants of her husband amounted to 365.'"

Shurtleff, Nathaniel B., "List of Those Able to Bear Arms in the Colony of New Plymouth 1643," New England Historical and Genealogical Register 4, 1850

Huntington, E. B., A Genealogical Memoir of the Lo-Lathrop Family in this Country: Embracing the descendants, as far as known, of The Rev. John Lothropp, of Scituate and Barnstable, Mass., and Mark Lothrop, of Salem and Bridgewater, Mass., and the first generation of descendants of other names, Ridgefield, CT, M. Huntington, 1884]

English military institutions formed part of the cultural inheritance which the first colonists brought to America, immigrants and occasional contact with the British Army kept the colonists informed about newer developments. The most important of the inherited institutions was the militia, which dated back to Anglo-Saxon times, but the specific conditions of colonial settlement produced important modifications. Other variations crept in as the defensive needs of the colonies began to outstrip the capabilities of the militia.

The first settlements in Plymouth and Massachusetts Bay both recruited professional soldiers to act as military advisers. The colonists recognized from the beginning that both the Indians and England's European rivals posed potential threats. Plymouth, on the advice of Miles Standish, organized four companies of militia within two years of its founding. The Massachusetts Bay Colony profited from the experiences of the earlier settlements. In 1629 its first expedition left England for Salem with a militia company already organized and equipped with the latest weapons.

Growth in each colony soon led to innovation. In Massachusetts, an excess of non-commissioned officers over European norms allowed for forming subordinate elements, or "demi-companies," which received a field test in a 1635 punitive expedition against Indians on Block Island. When the colony then grouped its fifteen companies into three regional regiments in December 1636, it became the first English speaking government to adopt permanent regiments. Plymouth followed in 1658, Standing regiments did not appear in the English Army until the 1640's.

Another modification of the European heritage occurred in the choice of weapons. Wilderness conditions accentuated the flintlock musket's advantages. By 1675 nearly every colony required its militiamen to own flintlocks rather than matchlocks: American armies thus completed this transition a quarter of a century before European armies. Many colonists hunted, but few had ever fought in a formal line of battle. Militia training consequently stressed individual marksmanship rather than massed firing at an area, which had been the norm in the Old World. A specific byproduct of this emphasis was the refinement of the rifle - a hunting weapon with German roots - by gunsmiths in Pennsylvania. The Pennsylvania rifle was longer than the standard musket but had a smaller bore (usually .45-caliber). Grooves, or rifling, cut into the barrel imparted spin to the ball and allowed a trained marksman to hit targets at up to 400 yards. As a military weapon the rifle was effective in skirmishing, but its slow rate of fire and lack of a bayonet placed riflemen at a disadvantage in open terrain.

The biggest difference between the English trained bands and the colonial militia was the latter's more comprehensive membership. Few free adult males were exempted by law from participating: the clergy, some conscientious objectors, and a handful of other special groups. This situation was the result of the first settlers' immediate need for local defense, a need absent in England since the days of the Spanish Armada. But in the late seventeenth and early eighteenth centuries, the danger to the more settled regions subsided. Although a militia structure based on an area's total male population was an admirable goal for local defense, taking the men for military service disrupted a colony's economy during extended crises or lengthy offensives. As other institutions emerged, the militia was left as a local training center and a replacement pool, a country selective service system and a law enforcing agency, an induction camp and a primitive supply depot.

As early as the 1630's during the Pequot War in New England, temporary detachments were drawn from the militia companies for field operations against the Indians. Volunteers or drafted quotas formed the detachments. This expedient practice minimized economic dislocation and concentrated field leadership in the hands of the most experienced officers. But even the detachments were seen as disrupting continuity life too much, and eventually they were employed primarily as garrisons. A different type of force emerged in the 1670's. Hired volunteers ranged the frontiers, patrolling between outposts and giving early warning of any Indian attack. Other volunteers combined with friendly Indians for offensive operations deep in the wilderness where European tactics were ineffective. The memoirs of the most successful leader of these mixed forces, Benjamin Church, were published by his son Thomas in 1716 and represent the first American military manual.

As you can see, if you have Plymouth and Cape Cod roots, some members of your family tree were likely members of a local militia and may have engaged in -- like at least one of mine -- the Pequot War 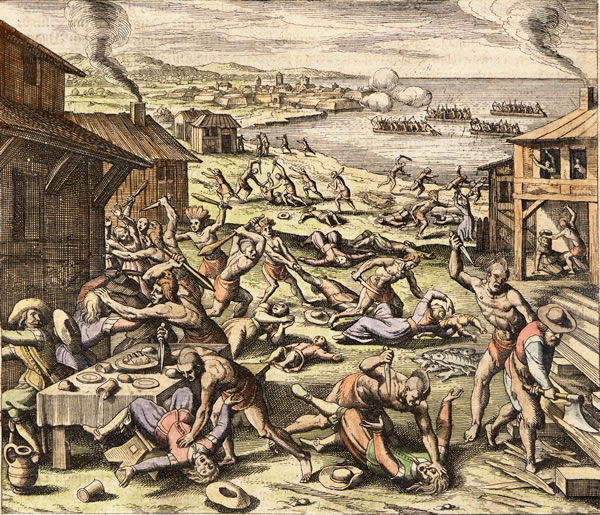 A depiction of the Pequot Massacre of 1637 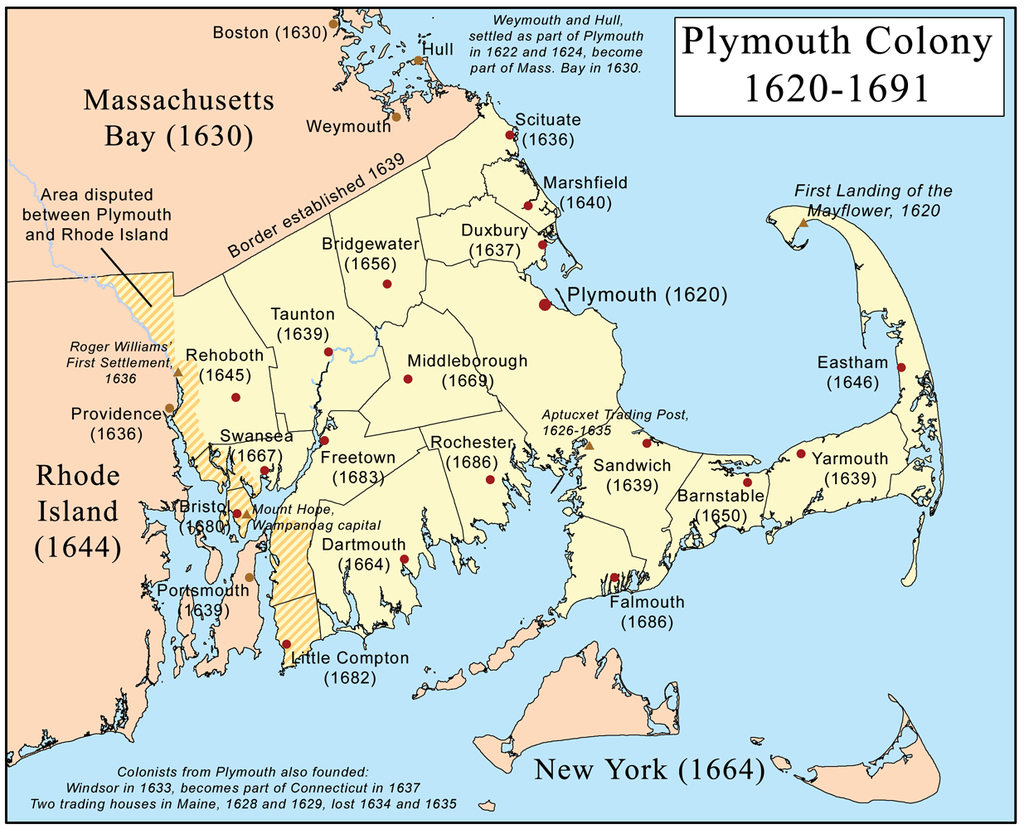 Comment by William S Dean on June 7, 2010 at 9:25pm
"It is well known that Cape Cod families are difficult to trace. Only the probate records survived the burning of the Barnstable County Courthouse in 1827, and similar disasters have taken their toll on the Cape's town records. Many of Chatham's records, for instance, were lost in a fire, and Yarmouth's records of the Revolutionary War period have been missing for years. Even so, many important Cape Cod town records still exist: the problem is that so few of them are in print. So it was fortuitous when Col. Leonard Smith stumbled upon a series of pamphlets published at Yarmouthport by Charles W. Swift in the early part of this century under the name Cape Cod Library of History and Genealogy: A series of 108 pamphlets which have become the basis of much genealogical research.

Comment by Spirit Baker on June 7, 2010 at 6:48pm
I was born in Hyannis. My family also came from Harwich and Brewster. Before the Cape they came from Plymouth. My maternal Great Grandfather Eugene Doane is part of The Doane Family from England.