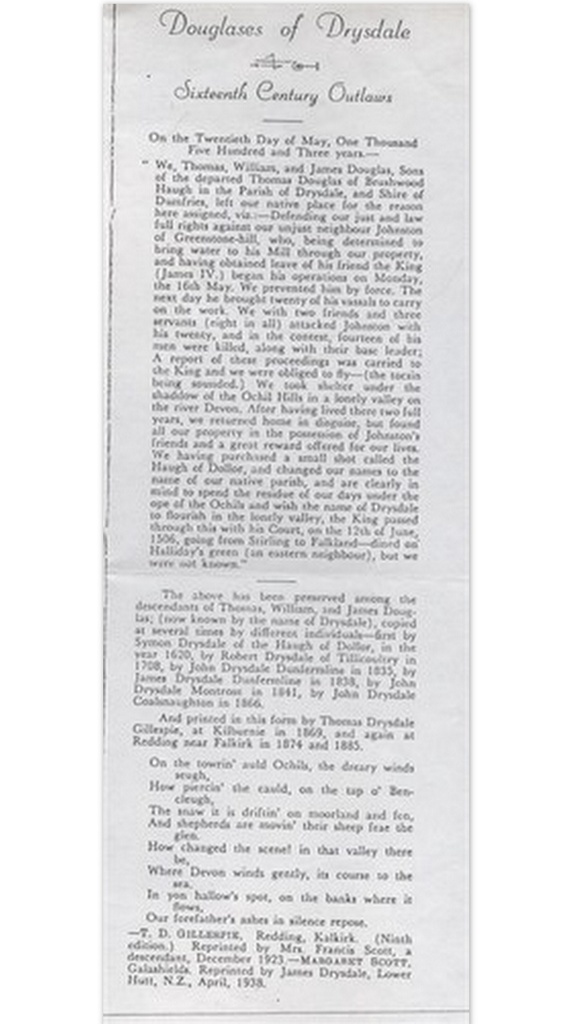 sorting out the extra  files

there has gotta be a better way to do this . 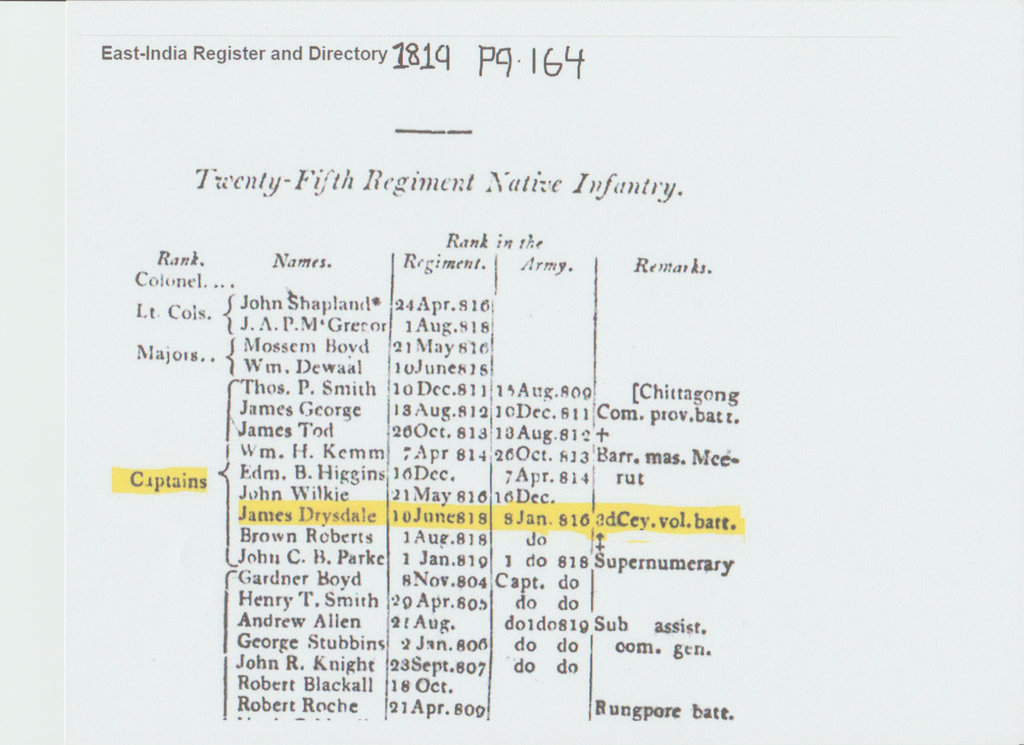 From Fife Family Histories , I own none of these  publications as they are works of the Authors who wrote them , they are unedited in original form .

ADAM DRYSDALE (1806-1886) OF MONTREAL, His Ancestors, Descendants and Related Families (1987) by Alpin Ogilvie Drysdale, can really be sub-titled The Drysdales of Dunfermline, Montreal, and Newfoundland, for the families were all connected. The families can be traced back to Dunfermline to the Thomas Drysdale who married Janet Walker. They had 3 children: Adam (b 1738), who married Margaret Thomson in Inverkeithing in 1762; William (b 1740), who married Catherine Cunningham in Dunfermline, also in 1762; and Elsped (born Dalgety, 1747). The Montreal Drysdales descend from Adam and the Newfoundland from William, Adam's son, Captain Adam Drysdale (1767-1849) married Torryburn, 1795, Grisal Magdalene Robertson (d 1835). His early history has been lost, but not that of his career as a master mariner. Following the end of the Napoleonic Wars he went into partnership with Captain Alexander Allan of the Canadian Allan Line and built their first brigs, the Jean in 1819 and the Favourite in 1825, to transport goods and emigrants to the New World from Glasgow to Montreal, including the first Scottish emigrants to Canada. In 1837 Captain Drysdale retired from the sea and he and his son, also Adam Drysdale (1806-1886) settled at St Andrews East near Montreal, but the father only remained there six years. The son was quickly followed to Canada by his fiancee, Mary Black (1810-1902), also from Dunfermline, who from her great-grandmother, Ann Wardlaw, married to Robert Mudie in Balmule (1766), could claim descent from the noble Wardlaw line and through them to King Robert the Bruce. In 1842 the yr Drysdale, who had been trained as a wheelwright, moved to Montreal, and branching out into the construction business with a new partner, Robert Allan, they became today's equivalents of developers; many of their subsequent building endeavours took place in the central section of the city. Thus, firmly established Adam Drysdale and Mary Black were the progenitors of the Montreal branch of the family. As stated earlier the Newfoundland branch of the family stem from William Drysdale (b 1740) in Dunfermline. From him four Adam Drysdales followed in succession. The third Adam (b 1803) was a blacksmith in the Hydepark Locomotive Works in Glasgow. His son, Adam Drysdale (1832-1921), born Dollar, Aug 31 1832, married Jeanie McKersay in Glasgow on Dec 31 1868, and worked with Wylie and Lochhead, a fashionable Glasgow store, from 1860 until his retirement. His only son, Adam (b 1871) and grandson, William (1906-1985), were both newspaper printers in Glasgow. The third son of the last Adam, Charles Drysdale, also started out in the newspaper printing trade, but qualified as a chartered accountant, and went to Newfoundland in 1928, where, as well as becoming a founding member of the Newfoundland Institute of Chartered Accountants, was also the progenitor of the Newfoundland Drysdales, by his wife, Claire Murray

Rev JOHN DRYSDALE AND HIS DESCENDANTS, 1681-1991 by D C L Drysdale, is the story of Rev John Drysdale (1681-1726), Minister at Kirkcaldy from 1712-1726, and his famous descendants, by his wife, Anne Ferguson, daughter of William Ferguson, Provost of Kirkcaldy. His third son, Rev John Drysdale (1718-1788), minister in Edinburgh, was twice elected Moderator of the General Assembly of the Church of Scotland. Another son, William Drysdale (1717-1757), was merchant and Treasurer of Kirkcaldy, and through his wife, Katherine Robertson of Gladney, the family was related to the famous Adam brothers, architects. Two other sons, Robert and George, were Town Clerks of Kirkcaldy, and George also served two terms as Provost (1763-1765 and 1771-1775). The office of town clerk of Kirkcaldy seems to have been almost an inherited position, the last recipient being John Drysdale, who held office from 1811-1873. William's (1717-1757) son, William Drysdale (1745-1825), was also Town Clerk of Kirkcaldy, and acquired the estate of Pitteuchar, in Kinglassie parish, in the early 1800s. He was succeeded there by his son, Sir William Drysdale (1781-1843), Writer to the Signet, who was knighted while City Treasurer of Edinburgh, 1841-1843. The latter's sister, Ann Drysdale (1792-1853), emigrated to Australia per the "Indus," ex Leith, Oct 1839, arriving Melbourne, 15 March 1840, and there formed a squatting partnership with Caroline Newcomb of London. Her brother, John Drysdale, farmed Kilrie Farm in Fife, and married a cousin and sister-in-law of George Russell of Golfhill. Frequent mention to both the latter Drysdales is to be found within the 7-volume "Clyde Company Papers," edited by P L Brown. Later Australian Drysdales were engaged (from 1883 onwards) in sugar cane refining in Queensland, and their story can be found in "John Drysdale and the Burdekin" (Sydney, 1964) by Roy Connolly

OBITUARY: DRYSDALE  John Drysdale, an early pioneer of Cedar Fort, died at his home in that place April 4. Mr. Drysdale was born Oct. 10, 1837. He came to Utah in 1853. He crossed the ocean in the ship Elvira Owen in a company of emigrants in charge of Elder John R. Winder. He went to California in 1854, where he remained during the winter, coming back the next summer when Johnson's army came to Utah. He located first at Bountiful and later moved to Clearfield. He was in the Tintic war and took part in the skirmish in which George and Washburn Carson were killed. Soon after this episode he located in Cedar Fort, where he had lived until his death. He married Emma Clark July 8, 1861, and to them were born nine children, six of whom, and his widow, survive him. He had been a prominent citizen and took part in many religious and secular affairs in the community. (Deseret News 15 May 1912)