For Discussion of Death Records, Obituaries, Funeral Cards and Cemeteries as they relate to Genealogy. 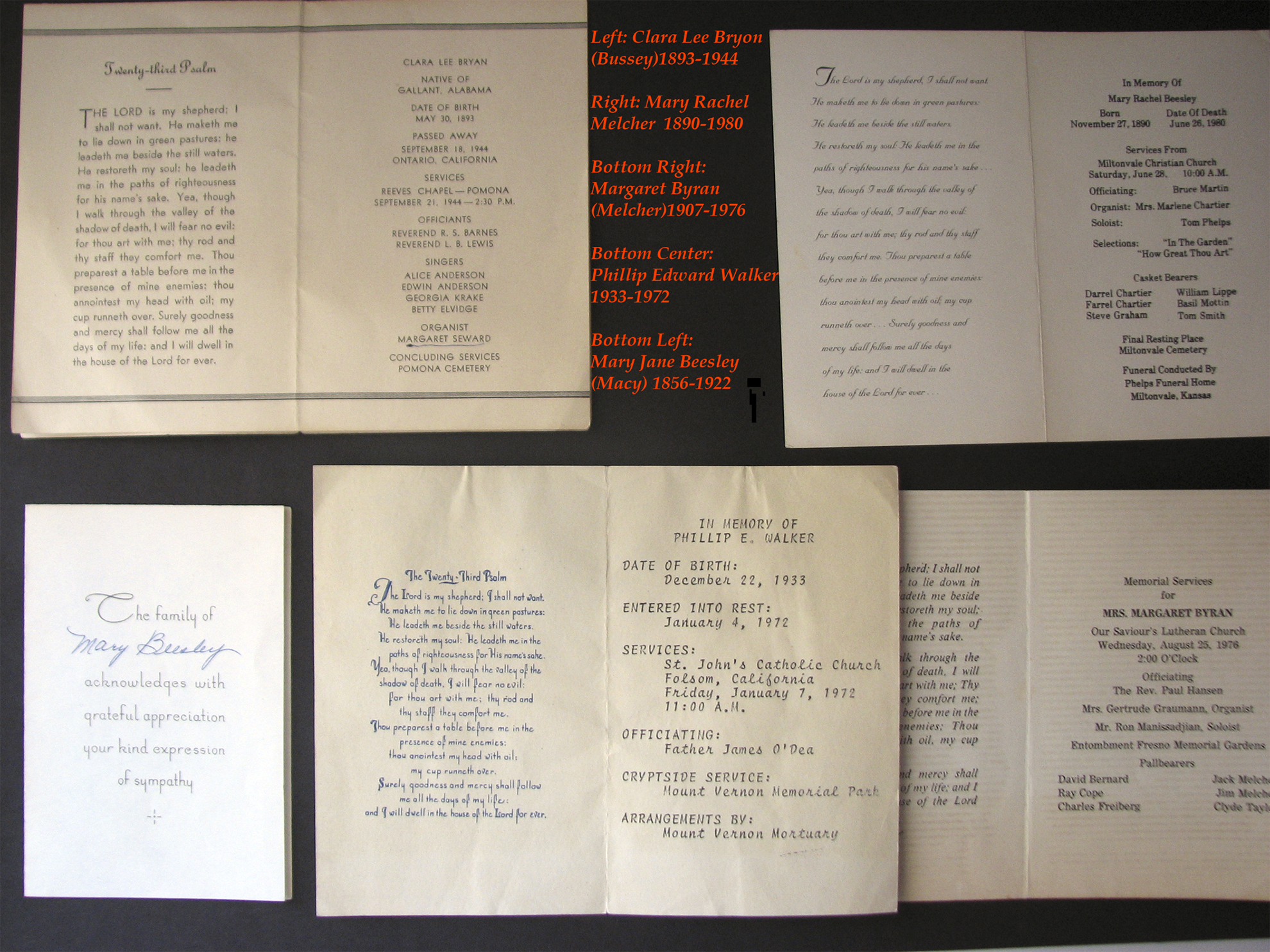 How the Mind Works in a Cemetery

In search of my great-grandmother: off to the cemetery or not?

You need to be a member of Death Becomes You to add comments!

Comment by Rhonda Foley on March 1, 2011 at 7:36pm
Hi Everyone, I enjoy spending the day in graveyards. My sister and I have been cataloging this one cemetery that has many many relatives. Last fall, I got to the cemetery before my sister so I started so I began cataloging the headstones. It was a beautiful day. I felt something tap my right shoulder 3 times. It got real cold and I was thinking I cold front is coming in, I should have brought my sweater. At that time I turned thinking my sister was there and said "Did you bring your notebook Stacy"?  and no one was there. I instantly got a cold shiver down my back and left. That really freaked me out. Maybe it was my grandmother that was 3 rows over. Who knows.....

Comment by Teresa McVeigh on September 19, 2009 at 6:07am
I found this book review of "Food To Die For" on the Old City Cemetery site (Lynchburg, VA): www.gravegarden.com It not only has heritage recipes, but explains funeral etiquette.

Review by Rowena T. Morrel
From In the Kitchen, Lynchburg Edition, September 2004

The second best time I ever had in a cemetery, I spent with Jane White, Jessica Ward and Tom Burford in the Old City Cemetery. I had come to Lynchburg to learn more about Food to Die For, a cookbook filled with funeral lore, etiquette and history about the old cemetery and how it came to be living testament to the willful ways of five women determined to honor their dead, clean up the place and create an organization that would perpetuate the Old City Cemetery, the nucleus of a group known as The Southern Memorial Association.

All of us have been at a loss from time to time as to what to say or do when confronted with the death of a friend, relative or acquaintance. I always head for the kitchen where I find solace preparing food for the bereaved and expressing sentiments not readily spoken.

Jessica Bemis Ward follows a similar direction. She married into a large, aging and well know Lynchburg family over 40 years ago and is an experienced funeral goer. Jessica applies her sense of good taste to the delicate task of burying the dead and now shares sage advice with good humor. She compiled over 100 recipes she calls funeral food and created a unique and much needed guide for the bereaved. From my search, I found no other cookbook that deals with the practicum or mourning—filling this not so obvious void is Food to Die For.

I asked Jessica where the idea came from. “The phrase came to me during a funeral and I thought it would be the perfect title for a cookbook to raise funds for SMA.”

Where did the recipes come from? “Many are my own tried-and true recipes; others were contributed by friends who have both experienced the comforting generosity of friends and prepared food themselves for such occasions, still others are keepers of those recipes traditional to the area and the times—like pimento cheese and corn pudding and country ham. Funeral food recipes are not easy to come by, not because good cooks withhold them but they are usually recipes, reserved for such occasions, which cooks know by heart, without need for measure or written instruction. Funeral food must be familiar, delicious and portable, foods that escape the bonds of ‘piping hot’ as well as dishes that can be stored and served again with safety and ease.”

Jane White’s Corn Pudding fits the criteria: prepared in one dish suitable for transporting, made easily in any season of the year with fresh, canned or frozen corn and includes only ingredients that are normally in her kitchen.

Jane White is the director of Old City Cemetery; she is a gardener and planner with long and wise vision not just for the cemetery. The philosophy she lives by, she calls “in dying order” (I call “drop dead ready”), meaning that she is ready to go—all things are in order, all of the time. It is an enviable position—my silver isn’t polished, but my dresser drawers are straight. Under her astute management, Old city Cemetery has four museums, beautiful gardens and ongoing plans for its beautification and growth. You will want to ask about the beehives and the goats located on the premises when you visit.

Jessica has included other useful information about funeral etiquette, expressions of condolence, writing an obituary and lingering expressions of condolence over an extended period of time as well as helpful handy tips. Recipes are prefaced with helpful, sometimes humorous remarks about the contributor, the origin or ingredients. Wonderful old photos punctuate the book embracing its history, personality, functions, occupants, visitors and events through the years. Food to Die For is helpful and handy, historically enriching and traditionally rewarding.

Comment by Teresa McVeigh on September 19, 2009 at 5:35am
In one of my gardening magazines I found an article about Lynchburg, VA's Old City Cemetery. It has been restored and also made into a garden to preserve historical flowers, especially roses. They have a wonderful website at

with a genealogy section and search engine for the graves. Some lovely inscriptions:

“Leaves have their time to fall,
And Flowers to wither at the North wind's breath,
And Stars to set—but all,
Thou hast all seasons for thine own O Death.”

“We know when Moons shall wane,
When Summer birds from far shall cross the Sea,
When Autumn's hue shall tinge the Golden Grains,
But who shall teach us when to look for thee?”

“So fades the lovely blooming flower,
Frail smiling solace of an hour,
So soon our transient comforts fly
And pleasure only blooms to die.”

“A rose and rosebud half blown
Late flourished near this ground.
A while they bright and lovely shown
And shed their fragrance 'round.
The scythe cut down these flowers fair,
To earth too briefly given.
Though here they fade, their sweetness rare
Exhaled, ascends to heaven.”

Comment by Kay Adkins on August 27, 2009 at 4:47pm
Went to Boise to see a long lost nephew (my bro in law is a deadbeat dad) and ended up in the Idaho City Cemetery. A pseudo-ghost town (pop 400 or so). While looking at a fenced-in plot we commented on Anna D Shanahan's untimely death in 1911 at age 21. In the way of 15 year old boys everywhere, our nephew said she probably died from drinking too much whiskey. When he finished speaking, the gate slowly creaked open. Buried in the Catholic section of the cemetery, Ms Shanahan, or the Mr. Daley (a brother?? uncle??) buried with her, was inviting us in to set the record straight and uphold her virtue. Dylan closed the gate - being sure to latch it! - but I wasn't about to get close! I like my graveyards quiet. Any other ghostly encounters out there?

Comment by Teri Lewis on July 26, 2009 at 1:17pm
Hi Debbra! I am located in SW Georgia, USA. No specialization on cemeteries, just whatever I come across going down the road sometimes. I like to travel down back country roads and sometimes luck out on an old cemetery.

Comment by Debbra Walker on July 25, 2009 at 4:26pm
Hello Terri, Glad to have you here. What area are you from? Do you "specialize" in a certain kind of cemetery?

Comment by Teri Lewis on July 24, 2009 at 10:32am
Greetings to all! I am considered a young researcher by some because I am only 35 but I find the research so fascinating. It is almost like I am being called into the cemeteries. Creepy by some standards. Anyway, I also take pictures of the grave sites. I am addicted and love it. My grandmother use to say I was 'digging up bones'. So now when my husband asks where am I going for the day, I say 'digging up bones'.

Comment by Kay Adkins on July 23, 2009 at 1:34pm
How wonderful it must be to see those old cemeteries! The oldest one I've ever seen was in Nova Scotia. There's an Arcadia Press book about San Diego, CA cemeteries - I bought it for a friend whose relative was mentioned in it. It's so sad how San Diego completely disresepcted a lot of their old cemeteries -bulldozed them and built freeways over them with no atempt at documentation or preservation. They actually built a big "grave" and pushed lots of the old headstones into it, keeping a few to mark the top. It's the only place with a grave for headstones. Makes me glad I didn't have any San Diego pioneers in my family.

Re: Graveyards and stones in the UK
Yes, they are wonderfully preserved. In fact the British are exceedingly into preservation of everything historical, from tombstones to 1000 year old churches to 3000 year old henges (stone circles). I could not actually search much for ancestor graves in the UK since almost all of my and my husband's lines came over before the Revolution, were mostly poor Scots and Irish, and tracing them to the homeland has been difficult. But my husband and I were enamoured with the churches, which are often the oldest buildings, and loved the ancient Celtic stones (c700-900 AD). Most churches are exceedingly well preserved, even the rare Anglo-Saxon ones. If you can find where someone is buried, there may be excellent records and stones. Most parish registers are preserved and may date back to the 1500s.

Comment by Debbra Walker on July 22, 2009 at 7:53pm
Hi Teresa, Maybe you could share a little of what it is like in the discussion form to search in the UK? Are the old cemeteries kept up? Are there many small family plots? Is it hard to find the stones you search for? Are people "across the pond" as grave crazy as some of us?