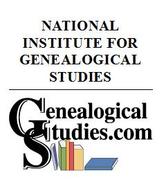 This group is for students taking courses or working on the Certificate for American Records from The National Institute for Genealogical Studies.

My name is Laurel Brown and I live in Indian Trail, NC just outside of Charlotte. I started doing genealogy over 40 years ago, but have had many starts and stops along the way. Over the last few…Continue

Thank you for adding me. 5 Replies

Thank you for adding me. I am just learning about Genealogy Wise in the social media class. I am Mary Mitchell. I am 41. Between my husband and I we have eight girls. They are ages 21 to 10. I will…Continue

Thank you for adding me to this group.Continue

Feel free to ask questions or post comments here about the Basic  Level Courses you are taking.Continue

You need to be a member of American Records to add comments!

Kerry - I research in NY also - along with surrounding states.  About conferences - Consider the New England Regional Genealogy Conference held every 2 years - the next one will be in Springfield in April 2021.  You can get on their mailing list by googling them.

The NYB&G sponsors a New York Genealogy Conference every 2 years - I believe the next one be in the Albany area in 2020.

Both of these conferences are definitely worth attending!

Hello, my name is Kerry Atkins, and I am enrolled in the American Records certificate program. I just completed Methodology 1 & 2 and am currently taking Social Media for the Wise Genealogist. The coursework so far has been very interesting and fun and has allowed me to put what I’ve learned to practical use. Most of my research, btw, is in Vermont, New York, and New Hampshire. I particularly enjoy transcribing documents, which harkens back to my secretarial career.

I recently joined the Connecticut Society for Genealogists and will soon be volunteering on a preservation project to index family group records donated to the Society between 1968 and present. My short-term goal is to attend a regional or national conference within the next 12 months. (Any suggestions?) My long-term objective is to become a certified genealogist.

I look forward to networking with my fellow genealogists and chatting with you soon!

An interesting tidbit for anyone doing research in the western Finger Lakes area of NY state.  It's too bad I just saw this now, I would have been interested in stopping by this event.

Four hundred years ago today on June 10th a man named Pabos visited what is now Fishers in 1618, apparently the earliest known European visitor to Victor.

Commemoration of the 400th anniversary of this landmark visit is to be held at the Pabos monument by Irondequoit Creek on Wangum Road next to Fishers Park in Fishers at 11:15 a.m. Monday, June 11th.

Event is being coordinated by Victor Town Historian Babette Huber and the Town of Victor Historical Advisory Committee.
All are invited and welcome to attend.

An historical researcher named George B. Selden determined that Pabos had been a Basque explorer from Europe who had boated up the St. Lawrence River in quest of the Northwest Passage. Irondequoit Creek had evidently been a candidate of routes to explore. Unfortunately for Pabos, he passed away during this expedition, with the consequent grave marker.

This information was found in response to a small stone tablet having been excavated in Fishers in 1907 by village of Victor resident Lou Crowley, who was then working for the Locke Insulator Company in Victor.

Fred Locke had been working as a railroad telegrapher in Fishers when he invented the porcelain insulator. He manufactured the early insulator prototypes in Fishers, which had copious clay deposits suitable for baking into insulators.
The particular load of clay from Fishers was being delivered to the insulator plant in the village of Victor when Locke spotted this small stone.

The small tablet, approximately 4” x 5” x 3/4” in dimensions, or about the size of a hand, was engraved as:

The phrase on the stone “ I Y I M “ has been translated to mean “At Home with Jesus in Death”, denoting its being a grave marker.

In the summer of 1959 historian J. Sheldon Fisher consulted with Lou Crowley in order to record his recollection of the 1907 marker discovery. Fisher then personally constructed the stone pyramidal monument to mark this history.

This stone pyramid is located in Fishers alongside Irondequoit Creek, about 300’ west of the clay field site where Crowley had identified that the stone had been found.

George B. Selden, Jr., an amateur archaeologist and friend of Fisher, researched the history that is memorialized in the plaque on the pyramidal monument.

His father held the patent on the "Road- Engine", also known as the automobile, composed of a wagon driven by an internal combustion engine. George Eastman had witnessed the signing of the patent application.

Archaeologist Selden had spent many years researching the colonial influence of the French in New York. He was the last living charter member of the New York State Archaeological Association, which was founded in Rochester in 1916.

Hello!  I am currently taking Land Records and have completed Methodology I and II.  This one is a bit of a challenge for me since pretty much all of the material is stuff I have never seen before, but I am really enjoying it.  I just have to carve out enough time in the next few weeks to finish it up!  Tough because we are in NY and my boys are in the last two weeks of school for the year and there seems to be multiple things going on at the same time for the next two weeks!

I didn't know this site was here, and I'm excited to have found it.  The one thing I have found missing in the classes I have taken so far was a way to have easy discussions between students.

I have been a member of this site since about 2012 and have not been on it for awhile.   I am taking the Social Media Course and have updated my profile; and, will be coming back often.    I am looking to obtain my certification    Thanks!

I am taking this certification course and I am excited to get more involved in the details of researching my ancestors.  I also have taken the Social Media course, which I found immensely helpful.

Hi, I am also taking the Social Media course from NIGS like many others who have posted, thanks to the "Great Canadian Genealogy Summit" of 2016. This is my first course! I'm a professional genealogist based in New York City, thus a lot of my work involves New York City or the immediate area. My mother's mother was from Erinsville, Ontario and my father's father was from Cape Breton, so naturally I have a lot of interest in Canadian genealogy on a personal level, and wish that I was asked to do more Canadian research for clients too!

Hello,  I am taking the Social Media course which I won when I attended the last Alberta Genealogical Society conference.  I am midway through the Methodology Certificate training with the NIGS.  Although I live in Canada the majority of my research is in US record as many of my ancestors on my maternal and paternal lines lived in the United States.

I am currently searching through New York, Michigan, and Kansas, and have a keen interest in Pennsylvania, Massachusetts, Vermont, Connecticut, and Virginia, to name the states I find myself researching the most.

I, too, am taking the Social Media course from NIGS.  I am a genealogy librarian but in this ever-changing world there is always more to learn.  To be honest, I have only been at this for about three years, so it is still somewhat new to me.  In the past I did research my own family tree.  Happily the Stauffer and Pfaltzgraff lines were pretty much completed (as far as anyone can go) by cousins.  Let's hear it for cousins!

Hello! I am taking the Social Media course. I have also taken the Google course and most of the Basic Level courses for the American Studies program. There is always more to learn!