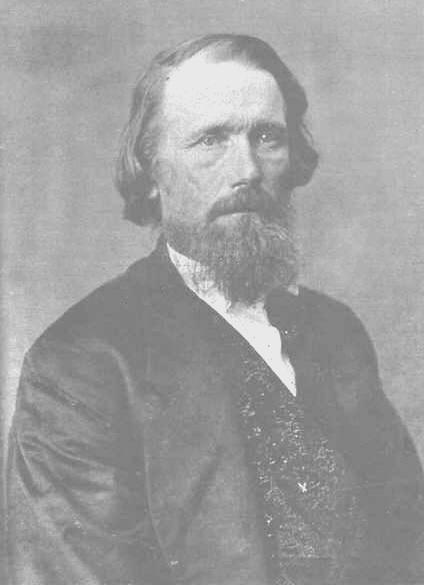 Permalink Reply by Dae Powell on September 12, 2009 at 9:54am
Hi John,
There seems a bit of sadness in his face. Or perhaps he was unsure of the photographer.

The only John William POWELL I have in the database even close to your ancestor was born in 1821 and died 1889 and married 1856 to Indiana Virginia Scoggins of Brunswick County, Virginia.

Allow me to add your Powell group and we'll keep an eye out for him.

Permalink Reply by John P. Nail on September 12, 2009 at 4:58pm
Actually, I'm in good shape from John William Powell forward. My mysteries are the Robeson County, NC Powells, what happened to the family while they were in Florida, and who Daniel Powell was and how he was related. Unfortunately, I'm working in the period before the every-name census, so everything is pretty obscure.

As to the sadness, you have to remember what photography was like in that era. Shutter speeds were very slow and the subject always had to remain very still. You won't often find a photograph from this period where the subject is smiling because they would have to hold the smile so long. On the other hand, I suppose he did have a lot to be sad about.

Permalink Reply by John P. Nail on September 27, 2009 at 8:21pm
That's very interesting, and there could well be a connection between those Powell families. I don't think Perquimans County and Roberson County are very close, however. Thanks for the comment.

Permalink Reply by Rev. Dennis Powell on October 7, 2009 at 3:02pm
Hi John,
I have my Levi Powell 1799 birth and died 1862. Levi was my Third Great grandfather. Levi was born in NC but do not know where in NC? His father was born in Perquimans, NC. His Father was Elijah Powell.
If you think your Levi is the same man please write back to exchange info.

My Powell line goes back to Robeson Co in the mid to late 1700's. From there most of them moved to Georgia around 1800, presumably because of the Land Lotteries there. I doubt my line is connected to the one you elicit but it's possible as there are several members of the family who I have not been able to document. If there is a male Powell in your line I would encourage him to have his DNA tested and join the Powell Surname Project. It's pretty clear there are at least ten Powell lines that go back to the late 1600's/early 1700's in the US.


At any rate, a distant cousin of mine, who unfortunately passed away, did extensive research on the Powell's in Robeson/Bladen/Cumberland in an attempt to take my line further back. There were a lot of Powells in the Robeson area between 17500-1800; I would guess at least four family lines. Here are some of the ones I know about:

[ This is my line. My cousin came up empty in researching past Robeson. He felt Duplin was the most likely place this line came from. Some recent information, through a male Powell connected to me DNA wise, suggests that we may have come from the Culpeper Co., VA/ Rappahannock Co., VA ]

[ I believe Douglas Powell was from the Brunswick Co VA line. ]

[ I believe this line is from Bertie Co, NC ]


As an example, here are the Powells listed in the 1790 Robeson Census

PS. I would not assume any given line is from Wales. The Powell name is seemingly Welsh in origin and there are a lot of Powells in Wales, but there are also a lot of Powell lines and I routinely come across evidence of lines coming from other places. Many came from non Wales England, some were Ulster-Scots who probably came from Scotland, etc. There were definitely a fair number of Welsh coming to America, especially to Cape Fear NC (Duplin County) and Pennsylvania, but Robeson had Scots, English, etc so I wouldn't assume anything (Or at least I don't). The county and state lines were in flux during this period, so you also can't count on just looking at Robeson County.

For years we have trying to verify the connection between the Bridges and Powell families of NC.

Your mention of Brittain and Hardy Powell of Robeson county interests me greatly.

Based primarily on DAR records recorded in the 1950s, it has been accepted for the past 60 years that Cherry, Hugh and Thompson Powell were the children of Lewis Powell of Bladen and Robeson Counties NC. However, when Lewis Powell dies in Dooly County, GA., his will makes no mention of these 3 children.

There was a Thompson Powell in Robeson County in 1790. In 1803, Thompson Powell and Hugh Powell are mentioned several times in various transactions in the estate records of John Bridgers. It is easy to assume that they are brothers-in-law. The DAR record even indicate that Thompson Powell married a Charlotte Hardy Bridges.

I am beginning to believe that Cherry, Hugh and Thompson were siblings, but their Father was not Lewis Powell.

What info do you have on the Hardy Powell in Robeson county?

I will have to go through my notes and verify this. My cousin found evidence of Hardy and Brittain in Duplin/New Hanvover Counties and I believe he later found evidence that they were briefly in Robeson, but I can't find the letter where he gave proof for this. Here is one of his letters talking about Hardy, however:

Here is a response from my cousin which references may of your questions - it's not to/from you but it I'm guessing they are connected to you since they are asking the same questions:

Permalink Reply by Dixie Gilbert on October 19, 2011 at 12:20am
Hi,I;m Dixie Gilbert. I am just about as sure as I can be that Brittian Powell is my 2nd gggrandfather. Tracing the women in the family is another story.I live in Pensacola,FL.I  have been  working on my tree for about two years. I understand that when some of the Powells left NC,they moved here,too .hope to hear from your branch soon.    dixiegilbert1@gmail.com

Hello John, my great grandmother Kittie M Powell,  was born Sep 13, 1875 and died Dec 28, 1953. She married Elias Milton Harrington and resided in Robeson county their entire life. They had five children one of which my grandmother (Ellen) who married into the Andrews. Anyway, i have hit a wall when it comes to the Powell side of the search after her.  I found some info that her parents names might have been Ailey Stanley and Nicklos(?) Powell

Permalink Reply by Miles Phillips Powell II on July 26, 2013 at 11:45am
My family of Powell seems to be hard to trace in Robeson County as well. About the same time frame. Hybert Washington Powell, William R Powell, others possibly a Nawls or Rawls Powell too. Would love to find out more. This family seemed to migrate bqck and forth down the road to the Lake View, Mullins area.