I am researching for a friend, and it appears that her ancestors came to the UK in the early 1860s from Amsterdam.  They are recorded as having the surname 'Foot' or 'Foote' but I can't find any reference to that name in the Dutch records.  I suspect that they have anglicised their name.  Can anyone suggest what it might have been whilst they were in Holland?  Records in the UK show them as being Henry Foot(e) b. abt 1835, wife Kitty Foot b. abt 1837, sons Samuel b. abt 1858 and Marcus b. abt 1860 in Holland.  Henry is recorded as being a slipper maker.  They went on to have more children in Middlesex, UK.  I suspect they may have been Ashkenazi jews but have not confirmed this.Thanks!

Permalink Reply by kate broad on May 14, 2015 at 8:41am
Ada Peters, that is wonderful, many thanks, I was not expecting that! This fits very well as on one London census there is a record of a Solomon de Vreind (brother) visiting the family. I can now assume this was Kitty's (Grietje) brother. My friend will be delighted with this news, once again, thank you.

I know it has been a long time since you posted the information on the Voet family, but I wanted to get back to you to let you know what a great help this has been.  Based on the information and links you gave me, it has been possible to trace the line back to 1688 in Amsterdam.  It has been a bit of a struggle as we had to understand records in Dutch and also get to grips with the Ashkenazim naming conventions - but got there in the end.  So many thanks indeed, it really is appreciated.  By the way - this last post showing the birth of Betje Voet - was interesting.  I had at first assumed Betje died young as she did not go to England with the rest of the family - but then a marriage for her in 1895 Amsterdam was found. Curious! She must have been a tiny baby when the rest of the family came to England so I can't help wondering who brought her up! Best wishes, Kate

Betje Voet second marriage. But when you look at the attachments of her first marriage with David Pach her parents were Andries Simon Voet and Leentje Park and this Betje was born Amsterdam 10-06-1863.

So it is possible that she died young.

Great that you have come so far. 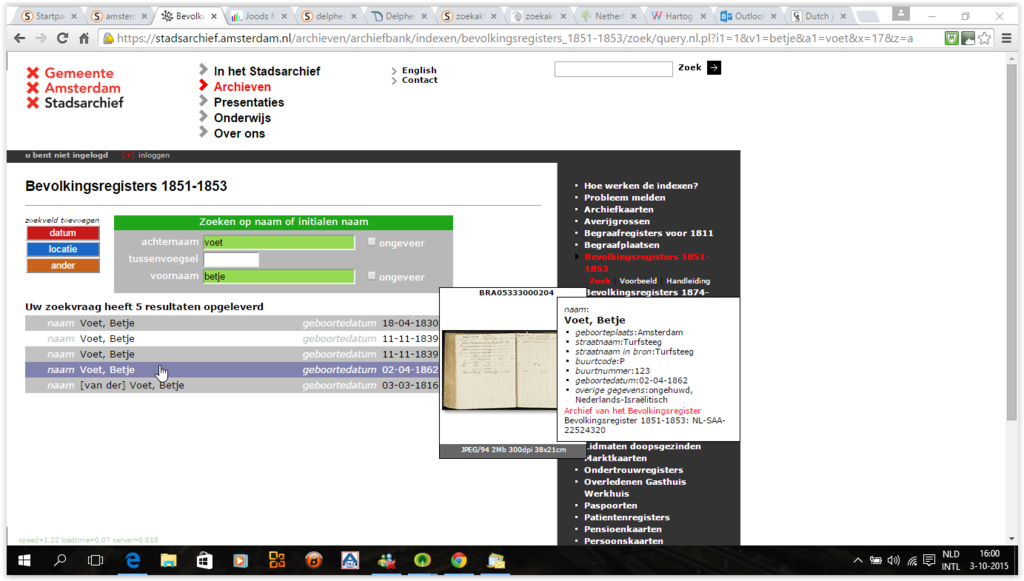 A site with family trees.