The Taylor Up and Down Sawmill 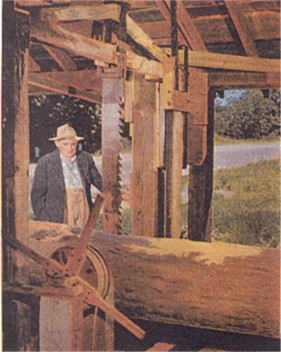 Photo from "The pride and joy of Ernest Ballard, 84, is this rare, water-powered up and down sawmill he erected at his home in Derry, New Hampshire." (There'll Always be Water Wheels; by Neil M. Clark, December 3, 1955.)

The Ballard State Forest in Derry is 71 Acres surrounding a pond, with picnic tables and walking trails, but the main attraction is the Taylor Sawmill. Built 200 years ago, around 1799, it was an advance in technology from a pit saw, where two men used a long two handled saw, one standing above the timber and the other in a dug pit below. The “Up and Down Sawmill” is a mechanized version of the pit saw, using a water powered system of gears and shafts to drive the long blade of the saw. Generally only the saw blade was powered and logs were pushed through by hand, but with some ingenuity the moveable carriage was developed, to move the log through the moving blade.

One of the beautiful results of this type of sawn lumber is that the wood doesn’t display the typical curved cut marks seen on lumber cut by circular saws. Preservationists and renovators prize finding original timbers in old colonial era homes that display the marks of pit saws or “Up and Dow” sawmills. Cut marks are even used for dating colonial homes. This type of lumber, known as “sash sawn” lumber, is produced at the Taylor Saw Mill on the second and fourth Saturdays of every month during the spring and summers. Demonstrations run generally from about 10AM to 3PM through the end of September, as long as there is sufficient water to run the waterwheel at the dam. (This shouldn’t be a problem in 2009!)

The “Up and Down Sawmill” was a short lived technology, which was replaced by the water powered circular saw by about 1825. Circular sawn logs, driven by water turbines, steam, electricity and computers are still the most common type of lumber produced today. Being a short lived technology, there are only a few examples of this type of “Up and Down Saw” surviving in the United States. Other than Derry, you can see one at Old Sturbridge Village, in Massachusetts, or at the Shelburne Museum in Vermont.

Generation 1. Matthew Taylor was born about 1690 in Northern Ireland and died26 January 1770 near Beaver Lake, Derry, New Hampshire; married about 1720 to Janet Wilson and settled in Nutfield, New Hampshire in 1722. Ten Children

Generation 3. Robert Taylor, born about 1770, died 10 May 1837 in Derry; married to Dolly Colby. Robert Taylor bought the property where the sawmill now stands in 1799. He began to operate the up and down sawmill in about 1805. He and Dolly had ten children, including a daughter Rebecca Morrison Taylor who married John Poulsand Langmaid and died in 1888. He was the uncle to the murdered schoolgirl Josie Langmaid. See the blog posting on Josie's murder on 14 October 2009.

This story was originally published at www.londonderrynh.net