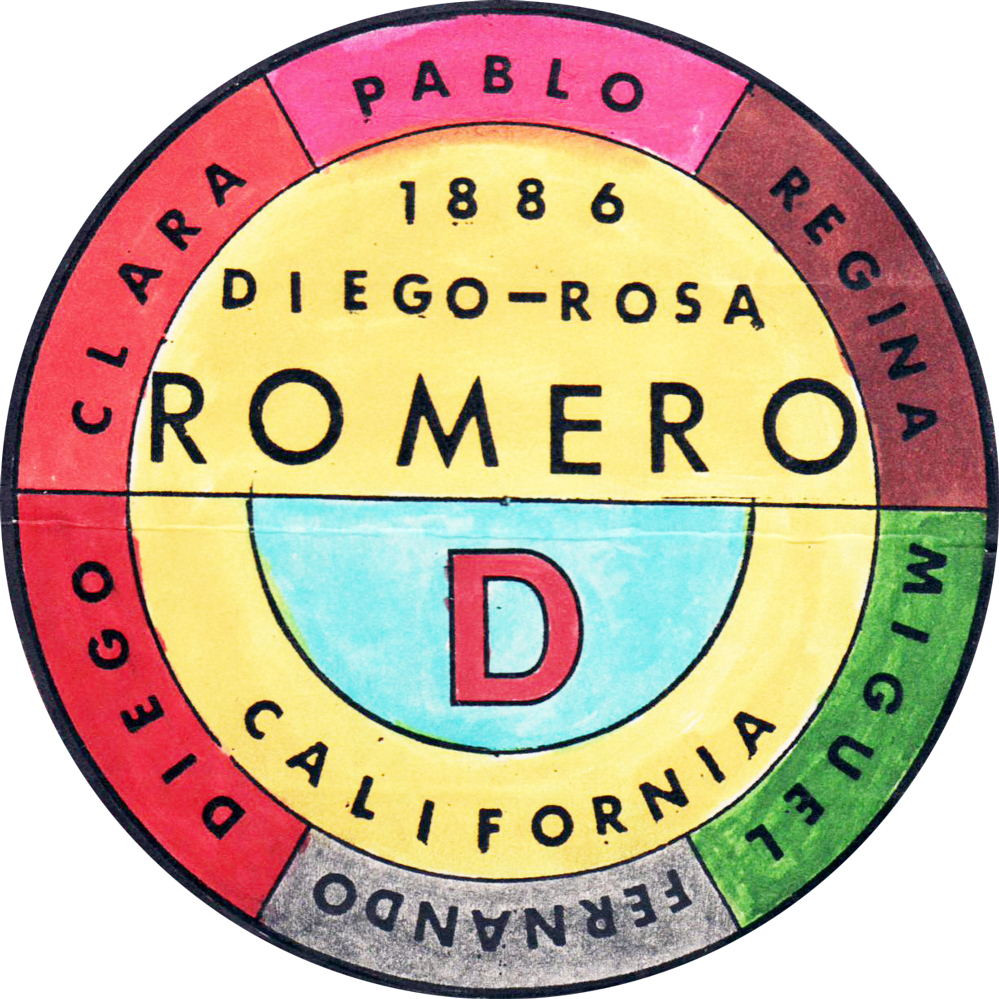 The Romero Emblem is to idenify those that wear it, to the family of their origin, with a meaning expressed with every color that was chosen, and placed in position with the names of all the original members of the Romero Family, in a circle, to express the unity and the perpetuity of the "FAMILY'.
Wear this emblem proudly, and when asked the meaning of it's nature you can say it is the origin and the history of your own existence.
In 1886 was born to Diego and Rosa Romero their first child Pablo. They had chosen The Golden State, California, to be the place where they would raise a family. This is depicted by the Yellow background with their names in the upper inner circle, and the State of Residence in the lower inner circle.
Pablo as shown in the outer circle on top, and moving towards the way a clock will register the march of time, in a field of light red will depict a pink cheek, red blooded boy is their first born, followed by a welcomed little Queen, Regina, as the name implies. These children being born in the fertle soil of their chosen State, as shown by the brown background at Regina's name.
Then followed Miguel, in field of Green, stating that it was he, who in the past, was the one that gathered the family together and explained, that opportunities better were there to reap, by traveling and working other Green Pastures, throughout the Green Valleys, throughout the State.
Next came Fernando, big and strong. "Never said No" , Challenged, he followed through life, fighting the challenge, whatever it was. The dark field behind his name will say to all, that neither long struggles, nor the darkest of times, can stop the Romeros, as they march on through life.
Next comes little Diego, the youngest of all. His talents were many, and his daring adventures, were amazing to see. With his struggles through life, he left for us all, a lesson to follow through bitter and sweet. The deep Red Field behind his name, will ever prove to us who now know, that Sacrifice comes in the form of Blood, Tears, and Sweat. The world owes us nothing for free to collect, but instead it is we who are the debtors indeed. To the world we shall show proof, as done in the past, The Romeros will go forth, with honor and pride, to continue and live as our parents all taught us, for the good of our Name.
Next in line comes Clara, beloved by all, in a place of honor at the upper left outer circle. Her family was small but cherished indeed. Yet young though she was when she died, the memories she left with the few of us that knew her, shall instill in the heart, the thought and the proof, that our Ladies are Queens, and shall be treated as such. The hand of our ladies, handle the clay, which they form with their fingers, representing all problems that life brings to them. They form it as artists, and finally do show, that we, exist through their efforts the person we are. The Golden Color, as a field behind Clara, will now imply, the Golden Harvest that has been attained by all the family, as Golden State Of California, by Diego and Rosa Romero.
Now for the Blue Background with the Initial in center. this is to now say, that you belong to the Romero Family, with origin, as shown in the circle of names, all born under the ever blue skies, of our favorite State.
Respectfully submitted for all ~~ Albert Romero
Dated: Dec. 8, 1985