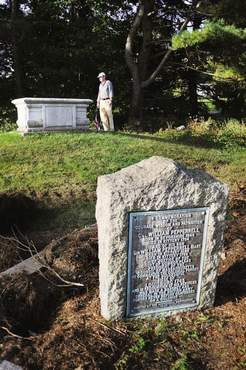 The original settlers of the Maine and New Hampshire coast were known as the “Piscataqua Pioneers.” Early settlements in Strawbery Bank, Portsmouth, Kittery and the Berwicks blended together before boundaries were settled between the colonies. York County, Maine was actually York County, Massachusetts, and the border below Exeter was disputed for generations. Recently, the Isles of Shoals and the island where the shipyard is located were still the subjects of lawsuits between the states of New Hampshire and Maine. Anyone with early seacoast ancestry is familiar with the confusing mix of records between Massachusetts, New Hampshire and Maine, and the guesswork of trying to find the correct archive for records.

One of these early families is the Pepperell family. On November 7, 2009 a colonial era tablet will be rededicated, on the 25th anniversary of Sir William Pepperell’s death. William Pepperell is famous as a merchant and soldier in colonial “Massachusetts”, even though he resided at Kittery Point. He lead the expedition to capture the Louisbourg fortress in Nova Scotia, and he was a profitable merchant. He married the grand daughter of Samuel Sewell, the Boston judge. He was the height of high society in pre-Revolutionary New England.

Curiously, his wife, the Lady Pepperell, seems more famous, and her elegant house in Kittery is locally known as the “Lady Pepperell House.” As a wealthy widow, she must have done some impressive entertaining in this mansion. Built in 1760, after her husband’s death and located near the Congregational Church. It is worth checking out the Pepperell sites (Lady Pepperell's house and the original Pepperell Mansion) the next time you head to the beach or to the outlets in Kittery. The tomb and memorial mentioned in the article below are on the road near both the Pepperell Mansion and the fort. The two houses are privately owned.

6. William, the Baronet, see below

Generation 2. Sir William Pepperell, born 1696, died 1759; married 16 March, 1723/4 to Mary Hirst, daughter of Grove Hirst and Elizabeth Sewell of Boston. Grand daughter to Judge Samuel Sewell and Anna DeQuincy Hull. Sir William did not have a son, so he adopted his grandson, William Pepperell Sparhawk, as his heir. Sparhawk agreed to change his name to Pepperell by act of the legislature.


------------
From SeacoastOnline.com
Famous family's memorial uncovered in KitteryVolunteers reveal colonial-era tablet to be restored in time for Nov. 7 dedication

By Dave Choate
dchoate@seacoastonline.com
October 12, 2009 2:00 AM
KITTERY, Maine — The legacy of the town's most famous family is being restored from the history books by residents, two and a half centuries later.

Obscured by trees for the last 30 years, a memorial stone and tomb for the Pepperrell family is being unveiled and restored to its former glory by a group of citizen volunteers. The Pepperrell Project — headed up by Steve Estes and fellow members of the Pepperrell Project committee of the Friends of Fort McClary, with aid from the Kittery Historical and Naval Museum — has taken down the cedar trees blocking the view of the memorial stone and plan to landscape the area and professionally clean the tombstone in the near future.

It will all come together on Nov. 7, the 250th anniversary of Sir William Pepperrell's death, when a rededication ceremony will be held at noon. There will be maritime music in honor of Pepperrell's shipping empire, a visit from French and Indian War re-enactors and more for those who attend.
The memorial stone lists some of the accomplishments of the two most famous Pepperrells: The elder William, who came from England and served as a colonel in the Maine militia, and his son, Sir William, who tied together a thriving shipping trade, fought in the French and Indian War and had huge influence in the Massachusetts government. Both made their names during the age where Maine was a colony of Massachusetts and each state was a colony of Great Britain, and both are noted for their contributions to colonial history in the Americas.

Estes outlined the history of the Pepperrell family while standing by the engraved tomb with the helmet-and-pineapple coat of arms ("it signifies friendship," according to Estes) where some 40 members of the family are interred, and which will be professionally cleaned of the ravages of time Saturday.
It's Sir William Pepperrell in particular who is noted for building a family shipping empire, as well as his military, judicial and political service. He led what Estes described as a "ragtag militia" — with the support of the British Navy — up to Louisburg, in what is now Nova Scotia, to capture a fort, though the miserable fighting conditions led to chronic illnesses in his later years.
Pepperrell also served as the justice at the Court of Common Pleas in Maine, at one point settling a significant land dispute by ruling against the British. He also served on the very powerful Governor's Council for Massachusetts, eventually becoming its president. Estes compared the legislative body to the Executive Council in New Hampshire.
Business was another big piece for the Pepperrells. Sir William's trade ships crisscrossed the colonies and Canada, doing plenty of business in North Carolina. He owned substantial tracts of land throughout the area and as far north as Saco and Scarborough, Maine. The top of the historic Pepperrell homestead can be seen when standing by the memorial tablet; all of the history here is fittingly on Pepperrell Road.

His success in all endeavors drew the attention of King George II, who Estes said made him a baronet and bestowed the title of British Army General upon him. Pepperrell was the only colonist to ever receive a royal title, according to Estes.
The tombstone, which is about 275 years old, was brought over from Great Britain. The memorial tablet was erected by the Pepperrell Association much later, in 1907, almost 150 years after Sir William Pepperrell died.
Estes said the trees were planted in the 1970s to provide screening between residences in the area and the parking lot for Frisbee's Market across the street, but the trees grew to the point where the memorial tablet was blocked from view. Estes said many people in the last week or so have stopped and said they never knew the memorial was there until the trees were cleared out.
"The casualty was that this really disappeared from sight," Estes said.
Those who want to help the group to take care of the memorial tablet and tombstone through volunteering or donations can call Estes at (207) 439-3479, or e-mail scekpme@aol.com.
-----------------