My 5x great grandfather Abner Poland served in Revolutionary War, but so did his father, Abner Poland, Sr., and so the records have always been difficult to separate when I started to research the Poland family.   He was born in 1761, and was only fifteen when the Battles of Lexington and Concord occurred in 1775.  He enlisted not long after, on 15 January 1776 as a private in Captain Abraham Dodge’s Company in Ipswich, Massachusetts.   He reenlisted in 1777 for another two years, and reenlisted again in 1780 serving a total of seven and half years until his honorable discharge at Newburgh, New York.  He was in the battles at Hubbardston, Stillwater, Monmouth and Yorktown.  Most interesting of all was that he received the Badge of Merit in 1785 from George Washington!

Although I knew Abner Poland had received this honor, and I had read about it in town histories and compiled genealogies, it was remarkable to find a copy of the honor amongst the paperwork for his pension application on www.Footnote.com    I guess he had mentioned his honor, and  a copy of the award was placed into his file.    There is also a handwritten document with the same information, without Washington’s signature. 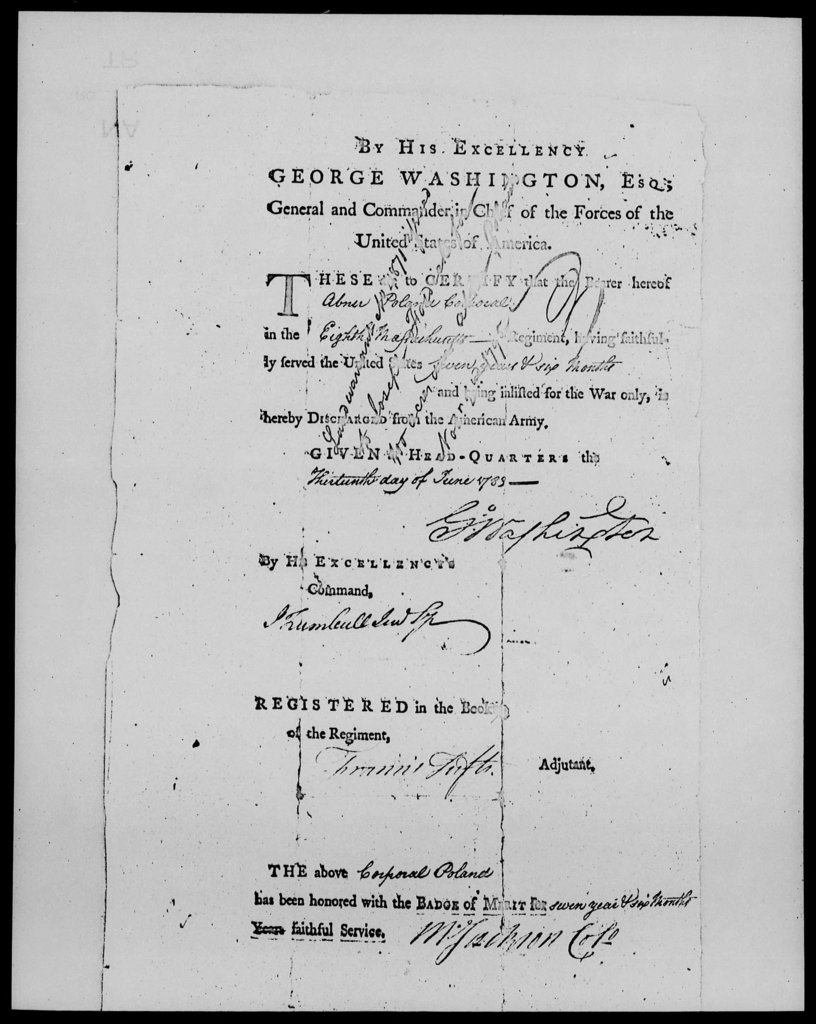 General and Commander in Chief of the Forces of the

THESE are to CERTIFY that the Bearer hereof

In the Eighth Massachusetts Regiment, having faithful-

and having inlisted for the War only, is

hereby Discharged from the American Army.

GIVEN at HEAD-QUARTERS this

REGISTERED in the Book

THE above Corporal Poland

[written diagonally across the paper]

To Joseph Foss ?? for

The mystery is that the pension file is dated 1818, and his wife received widows benefits until her death in 1846- but George Washington died on 14 December 1799.  Is this document a copy of an original paper signed in 1783 upon Abner’s discharge?  Or is a document made in 1818 when he registered for a pension?  If I travel to the National Archives in Washington DC will I see George Washington’s actual signature on the paper, or a copy made later?

Generation 5.  Abner Poland, b. about 1736 in Essex, d. 9 February 1824 in Essex; married on 3 April 1761 to Dorothy Burnham, daughter of Caleb Burnham and Dorothy Browne, b. 11 August 1734 in Essex, d. 7 April 1789 in Ipswich, Massachusetts.  This Abner, Sr., also enlisted in Capt. Abraham Dodge’s regiment,  reenlisted and saw the battle of Burgoyne, Long Island, White Plains and Harlem Heights.  He was also issued a pension.  He was a prison at Forton Prison, England.  Later he was the commander of several privateers listed in Salem.